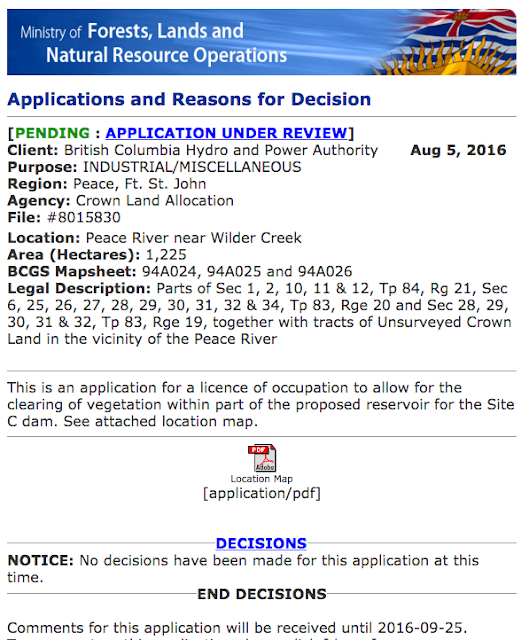 On Sunday Sept. 25, the deadline for public input into BC Hydro's request to log crown land slated for Provincial Park status above the Site C dam will close.

So why are you only just now hearing about this on a blog? Good question.

According to the Yellowstone to Yukon Conservation Initiative in an article in woodbusiness.ca, which you probably aren't in the habit of reading on a daily basis :


"On Sept. 1, BC Hydro placed a notice of intent to log the valley, including parts of the Peace-Boudreau, an Old Growth Management Area, at the back of local newspapers. There was no mention of the Site C dam in the advertisement, which gave a deadline for comments of Sept. 25."

Which is interesting because after recently issuing permits via Transport Canada and Fisheries and Oceans to allow the Site C dam to proceed even as the West Moberly and Prophet River First Nation were challenging the previous government's approval of it in the courts, the Trudeau government told the House of Commons on Tuesday that "it is now up to B.C. Hydro to conduct any further public consultations".


Not sure an ad at the back of local papers that doesn't even name Site C counts as "public consultations" but here's your window of opportunity to tell the BC Ministry of Forests, Lands, and Natural Resource Operations what you think about :


1) the lack of public consultation in which they have been complicit, and

2) BC Hydro logging forest and vegetation above the shale and mud landslides built on clay they've already engineered- as amply documented in photos at Laila Yuile's blog.

I spent much of today submitting this BC Hydro Licence of Occupation info, minus any snarky editorializing, to news media, environmental watchdogs, Site C opponents, and MPs. I haven't heard peep back from any of them so far despite the considerable help of facebookies and twitterati furiously aiming it at expected interested parties.

Do people living in the Peace even know about it? I don't know. There's a Site C Project website and a twitter feed and I don't see this mentioned on either one.

As Christy Clark rushes to evict ranchers and landowners by Christmas to get the 83-kilometre flood zone "past the point of no return" before the next BC election, in the largest removal of land from the Agricultural Land Reserve in its history, it probably got lost amongst everything else Site C this month :

The Tyee : BC Hydro: From Public Interest to Private Profits

Disturbing the Peace: The Story of the Site C Dam

And finally No Strings Attached for the on-the-ground Site C nitty gritty you won't read anywhere else.

Don't forget to tell the BC government and BC Hydro what you think about this latest round of "public consultation" and logging land above mudslides before the deadline this coming Sunday.

h/t Mike for the link to the application
.
Posted by Alison at 4:26 am 4 comments:
Email ThisBlogThis!Share to TwitterShare to FacebookShare to Pinterest
Labels: BC, BC Hydro, Christy Clark, Site C Dam 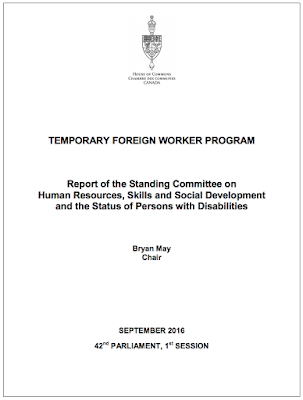 Sept 8, 2016. Colin Craig of the Manning Centre interviews President of Canadian Taxpayers Federation Troy Lanigan, on the benefits of proportional representation. Lanigan compares MMP with STV, which both prefer.


“Canadians will want to know how the various proposals for electoral reform would work and what they would look like in practice.”

The committee begins their cross-country road trip, hopefully with these materials in hand, starting next week.

And no, I don't know why there's no signatory from a Liberal and Bloc committee member on the request for materials to Monsef.

PR proponents have criticized Monsef's cross-country road trip as being too strictly focused on 'values' to the relative exclusion of discussion on different electoral systems -which are more rigorously discussed and debated at MPs' electoral townhalls.

So now we're going to get into specifics. In the meantime, you can find them at CPAC, in the appendices of FairVoteCanada's submission to ERRE, or Samara

Last week IPSOS passed on their rather depressing survey news to the ERRE committee that only 3% of Canadians were following electoral reform at all closely and those 3% were mostly wealthy educated older dudes.

Pretty sure that's going to change in the next few weeks. Here in BC, there's over 30 electoral events - the ones from today on are listed below.

If you can't make any of these, you can host your own discussion group and make your own submission to the Electoral Reform Committee. FairVoteCanada supports any version of proportional representation and will provide you with materials for your discussion :

**A dialogue can be as small as two or three people getting together for coffee or as big as a community town hall, and anything in between!
**You can also conduct a dialogue at a meeting of an organization you are already involved in.
**The government has provided a list of questions they would like feedback on. All you need to do is discuss the questions in your group, have someone take notes, and submit your report to the committee by Oct. 7.

Or you can attend one of another dozen BC discussion groups FairVote helped organize that aren't on the list below.

Don't know anything about electoral reform? Don't worry about it - we're all learning. Here's Stephen Harper's former chief of staff, Guy Giorno, on what's really important about it - making every Canadian vote count.

22 Local electoral reform events in BC from today onwards :

And don't forget the Electoral Committee also wants to hear from individual Canadians via their E-CONSULTATION.

If I missed your group or got something wrong, please leave me a correction in comments. Thank you.
.
Posted by Alison at 2:07 am 4 comments:
Email ThisBlogThis!Share to TwitterShare to FacebookShare to Pinterest
Labels: BC, electoral reform, ERRE, FairVote, Guy Giorno, Maryam Mosef, proportional representation

Notes from his presentation at the electoral reform committee today because Kady didn't blog this morning's meeting and the ERRE committee is taking about two weeks to post transcriptions.

16 of 31 Liberals voted for MMP/PR electoral reform in the House in December.

MMP is the best of two worlds - local representation and fairness both addressed.
MMP takes both local and regional candidates more seriously than any other form of PR or FPtP because voters can vote for preferred candidate and party separately. Local candidates vote is based on the candidate's work in their community without worrying about strategic vote. Regional MPs have to look at bigger picture of national issues because we currently have deficit of attention to national vision.

Any PR system would address these FPtP faults :
~false majorities result in less diversity of opinion,
~some regions unrepresented in Parl, ie NDP swept 80 seats in Quebec in 2011 with 40% of vote.
~exacerbates regionalism, ie Alberta IS Conservative
~feeds into unduly executive-dominated Westminster system of parliament via false majorities
~ silo-vision re legislation, rather than have to encounter different points of view
~tends away from consensus and collegiality and towards adversarialism and hyper-partisanship and organizing for next election.

Alternative Vote is ranked ballot within single member districts, and is in Liberal Party Policy Book.
Nothing in AV counteracts FPtP problems and it exacerbates disproportionality.
If last election had been under AV, Eric Grenier says 224 Libs would have attained seats instead of 185 seats under current system.
AV does not fulfill committee mandate of making every vote count because it never gets to counting the second candidates after the first round.

Compromise to get to multiple goals is to use the Jenkins Model of MMP allowing ranked voting on the local election side only or STV model with more local attention.

Naysayers are saying this committee is set up to be a "noble failure" due to deadlock impasse. This committee is formed the way proportional representation committees will be formed in the future. You guys can be proof that a system like this can work.

End of notes from Scott.

I'm rather alarmed to learn from the IPSOS poll discussed at yesterday's meeting that only 3% of Canadians are following the issue of electoral reform at all closely - older, more educated, affluent males - and that only one in five Canadians are aware of it at all.
.
Posted by Alison at 1:59 pm 1 comment:
Email ThisBlogThis!Share to TwitterShare to FacebookShare to Pinterest
Labels: Alternative Vote, Craig Scott, Electoral Reform Committee, ERRE, FPtP, MMP, STV
Newer Posts Older Posts Home
Subscribe to: Posts (Atom)