Campaign Research Con cats are out of the bag


“We’re in the business of getting Conservatives elected and ending Liberal careers. We’re good at it.”

Since 2003. For 39 Conservative candidates in the last federal election alone.

In 2009, Ciano, Wudrick and Braid participated in a series of workshops hosted by the Ontario Progressive Conservative Campus Association and the Preston Manning's Manning Centre for Building Democracy, ** (see update below) where Ciano was Executive Director of Practical Politics til Feb 2010 . At one such training session in February 2009, Wudrick and  Ryan O'Connor, 9th VP of the Ontario Con Party, were taped instructing students to set up Con-friendly "shell organizations" and "front groups" :
Wikileaks :


"With the apparent support of representatives from both the Ontario Progressive Conservatives and the Conservative Party of Canada, the OPCCA is attempting to covertly influence the political climate of Ontario's university campuses.

Presenters and participants are caught on tape advocating for the creation of front groups for the Conservative Party to masquerade as non-partisan grassroots organizations, influencing the political discourse on campus, stacking student elections with Party members, and conspiring to defeat non-profit organizations because of political differences, all with the intention of hiding their affiliations to the Party in the process."

(37:10) Aaron Lee-Wudrick : I say we, because, even though [Ryan O'Connor] was the forced neutral [as Student President] and me as the Tory president, it was all orchestrated obviously behind closed doors, and it actually worked out well because it looked like different groups of stakeholders, like I'm the outsider coming in, and you guys were just the responsible student government and we had other members of council, a guy he appointed to council, he got speaking rights but he wasn't an elected member, but just as another voice at the table, it made it look like there were all kinds of different corners where in fact we were all on the same team.

(42:14) Aaron Lee-Wudrick : Campus Radicals for Action on Zimbabwe Yes, or something like that, they were a great shell group. Feel free to use Campus Coalition for Liberty, that's ours so we have a logo and everything.

(50:05) Ryan O'Connor : When Aaron was doing the petition campaign, which "I knew nothing about;" I was printing them in my frickin office in student government, of course I knew about it, of course we were behind it, I couldn't take a public position on that issue because although I wasn't running for reelection, this was three months before the end of my mandate ... if we had made them an issue, no Tory would ever get elected to student government again.

Ryan O'Connor : Sometimes you can't attach the party's name to something. You just can't. If it's a really controversial issue on campus or something that might show up in the newspaper, you want to be careful. You just have your shell organization and have the Campus Coalition for Liberty and two other Tory front groups which are front organizations, all of those groups might actually qualify for funding too.

Aaron Lee-Wudrick : Don't think that the Party doesn't like that, because they do. They're things that will help the Party, but it looks like it's an organically-grown organization and it just stimulated from the grassroots spontaneously. They love that stuff. And they don't have to bear the burden of having any of it attached to their name."

Bonus : Out here in BC, Campaign Research was "the single largest beneficiary of the HST contracts, pulling down $167,000 of the $250,000 total budget for "conducting telephone town hall meetings" related to the implementation of the controversial tax change".

They were hired on by BC rightwinger Suzanne Anton in her unsuccessful Vancouver mayoralty bid, and also set up a fake website mocking Christy Clark for signing up a cat as part of her party membership drive in their campaign work for her rival George Abbott :


In the source code, the author of the website was identified as Bo Chen, who works for Toronto-based Campaign Research

The Campaign Research Con cats are definitely out of the bag.
.
Tuesday Dec. 20 Update : Phone calls to presumed Liberal voters in Con MP Peter Braid's riding advising them of false polling station location changes in the days days before the May 2 federal election have been traced to a "Conservative Party of Canada voicemail".


“I used them for a very specific and limited purpose and that was phone calling to constituents and voter identification,” said Braid.  “Nick [Kouvalis] has a particular expertise in this and that’s why it was helpful to have him involved.”

Braid said he’d consider using Campaign Research again, citing its excellent record with live phone calls. He added “It doesn’t necessarily mean I agree with everything they do.”

Presumably another example of Jason Kenney's "vital free speech" argument.
Despite evidence of just how entwined the history between the Cons and Campaign Research has become, expect imminent use of distancing weasel words like "over-zealous" and "party volunteer" from the Cons any moment now.
h/t The Record.
.
Mar 6, 2012 8am Update : Correction at **
I've deleted "Manning Centre for Building Democracy" from the post. As noted by a commenter here, MCBD did not host the OPCCA strategy meeting held by Con MP Peter Braid, his campaign manager Aaron Wudrick, and his constituency assistant Eric Merkley, as apparently mistakenly reported in UofT Free Press.
Although both the OPCCA seesions and MCBD sessions shared some participants, like Richard Ciano - Campaign Research Inc CEO, Ontario CPC president, and Manning Centre Executive Director of Practical Politics - the Manning Centre for Democracy Networking Conference was held in Ottawa a week later.
.
*** Link Defunct. Richard Ciano's page appears to have been expunged from the Campaign research website.
.
Posted by Alison at 5:12 am 7 comments:
Email ThisBlogThis!Share to TwitterShare to FacebookShare to Pinterest
Labels: Campaign Research, Con fuckwittery, dirty tricks, HST, Manning Centre for Building Democracy, Peter Braid, WikiLeaks 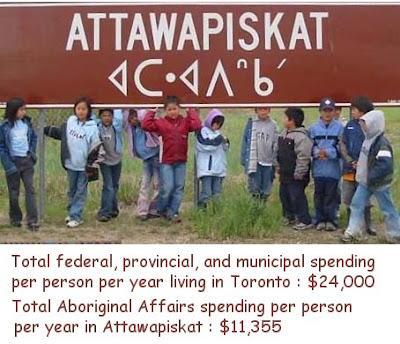 Rabble : Compare and contrast: Those Attawapiskat numbers vs. Toronto numbers
.
Posted by Alison at 5:39 am 2 comments:
Email ThisBlogThis!Share to TwitterShare to FacebookShare to Pinterest

Just before the euro was implemented, Germany cut wages to bring down unemployment, deviating downward from the agreed-upon 2%, resulting in the beggaring of all its neighbours by making German products cheaper and wiping out its EMU partners' exports.

I’ll tell you what happens in this world is class warfare. Look at the US. What happens in the US right now? For the first time in modern history since WW2, we are two years into a recovery and nominal wages are rising by absolutely zero - they’re not rising at all. For the first time we have not only a jobless recovery - that’s a normal thing – for the first time in the US we have a wageless recovery. Wageless recovery. And that is exactly what Germany did 15 years ago – wageless recovery – and I can tell you how this experiment is going to end because in the US there is no market that they can occupy, no partners that they can exploit, there is no currency union that they can use - the experiment will end in disaster. It will end in disaster because if you do not have a regime that allows the systematic participation of workers in the productivity increase – and this is what the people are talking about when they talk about the 99% but it is worse now than 10 years ago, worse than ever  -  then capitalism hits the wall because no economy can grow successfully if their people only have to rely on bubbles, that sooner or later burst, to consume, and if they cannot expect that they will participate in the success of all.”

Via The Real News Network


Iceland arrested the former CEO of one of its three failed banks, along with a broker and market director. Here in North America we arrest people for protesting the banks instead.

Another thrilling episode of Beyond the Border 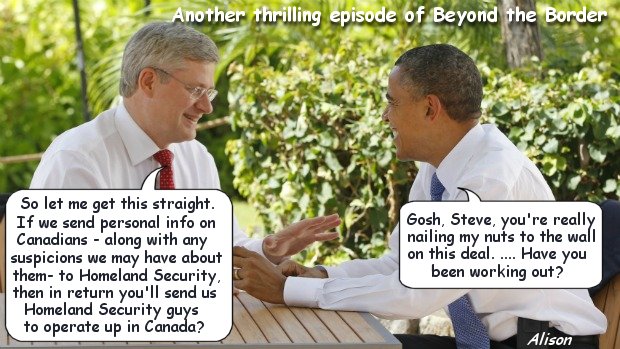 In this week's episode, Steve lays a cunning trap for Barry. In exchange for agreeing to pass travel and "informal" info about Canadians on to Homeland Security, Steve gets Barry to promise to maybe match $1-billion in Canadian taxpayer dollars to fund some pilot projects sometime in the future that will principally benefit the 40% of Canada-US corporations that rely on a cross-border supply chain. Will Barry take the bait?

Well you can clearly see the advantage to Canada here. If US security dudes are openly operating in Canada, never again will the RCMP suffer the humiliation of delivering a Canadian citizen to the US border so he can be tried and jailed in the US for acts committed and not considered criminal in Canada.  So there's that.

From the Canadian Perimeter Security and Economic Competitiveness Action Plan:


Canada and the United States have a long history of working together to defend the freedoms and rights of our citizens and to deal with threats to our collective way of life. Cross-border cooperation and information sharing are crucial to these efforts.

See how that works?
None of that old "Those who would give up Essential Liberty to purchase a little Temporary Safety, deserve neither liberty nor safety" nonsense. It's all the same thing now - it's "collective". And if we have to pitch a few more hippies/troublemakers/brown peoples into the gaping maw of US security paranoia, well that's just a price we're willing to pay to keep those trucks rolling back and forth over the border.

Most of the TV and print media commentary in favour of this latest episode of Beyond the Border has come from Canada-US Project luminaries Derek Burney, Colin Robertson, and Fen Osler Hampson, whose Blueprint for Canada-US Engagement appears to be the blueprint for Steve and Barry's deal. They say it will be very good for Canada and is in no way a threat to our sovereignty, a defence which would be rather more reassuring had Hampson not made a pitch to the Foreign Affairs committee in 2009 in favour of dropping the national border altogether.
.
Posted by Alison at 5:30 am 12 comments:
Email ThisBlogThis!Share to TwitterShare to FacebookShare to Pinterest
Labels: Beyond the Border, Canada-US border, Canada-US Project, creeping police state, Homeland Security, Obama, security perimeter 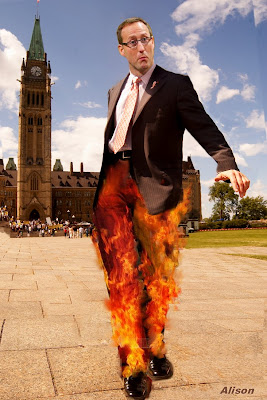 
"This government has spent some $90 million since coming to office just on Attawapiskat," he told the Commons on Tuesday. "That's over $50,000 for every man, woman and child in the community."

Yeah, Steve, it must be their own fault they're living in tents and sheds without electricity or running water or indoor plumbing. Better punish them for embarrassing you. And how's that school coming along after 10 years? Ah - next year, is it?


But according to Aaron Wherry's breakdown of the figures, the housing budget is only $500 per person per year, which would not even cover upkeep on the existing homes never mind building any new ones in a community where shipping the materials in costs more than the materials themselves.


A lot of racist crap in comments under these articles - in particular repeating rubbish like the G&M's More than 80 on-reserve politicians paid more than PM! - a lie already deftly demolished here .


Instead try this excellent article from Patricia Pearson  and a really really must read from âpihtawikosisân.
Donations via the Red Cross here. Attawapiskat page from Another Voice here.
.

with tiny credit to her tacked on at the end.
NaPo commenters busy congratulating NaPo on their excellent journalism.
.
Hours later ... via Holly Stick :
The National Post has changed its headline and added a note:


"Note: This article was inadvertently credited to Brett Hodnett. Full Comment apologizes for any confusion, which was due to a misunderstanding on our part. As noted, the original article appeared on the site âpihtawikosisân."