Lucky scheduling break for the Cons, eh? - getting Election Canada's Marc Mayrand to testify on 2011 election fraud on the same day they released the 2012 budget.

"We are free to choose our future," Flaherty said in his budget speech. "We have made our choice."


Election Fraud : Calling it "absolutely outrageous" and " totally unacceptable in a modern democracy", Elections Canada Marc Mayrand told the PROCommittee EC is investigating 800 specific complaints of electoral phone fraud in 200 ridings across ten provinces and one territory. 250 files open right now including 70 out of the 7,000 complaints in Guelph.


The budget features "streamlining" environmental review processes, plus gives $8 million to the Canadian Revenue Agency to target registered charities that are "too overtly political", translation : "opposition from environmental groups to the massive Northern Gateway oil sands pipeline."
New RevCan money will investigate "the extent to which these are funded by foreign sources." 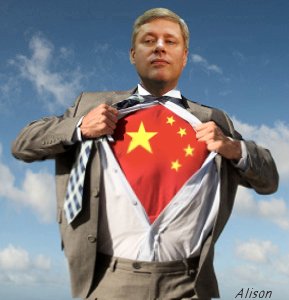 But foreign tarsands-to-tanker funding from China is still a-ok, even at the cost of Canadian jobs ...


"Chinese investment in Canada’s energy sector could move to a new level if PetroChina wins a bid to build the controversial Northern Gateway oil sands pipeline.
The largest of China’s three state-controlled oil companies has expressed an interest in building the $5.5-billion project across the northern Canadian Rockies and is considering purchasing an equity stake, said Pat Daniel, president and CEO of proponent Enbridge Inc.
[W]ith a workforce of almost two million and cheaper labour costs than its North American counterparts, the Chinese company stands a good chance of presenting a competitive bid."


Well so much for Pipeline Steve's Canadian 'jobs, jobs, jobs' angle in that case. Also :


WSJ : Canada To Allow Wealth Funds To Invest In Its Financial Institutions


"The Canadian government said Thursday it plans to introduce legislation to allow foreign and domestic sovereign-wealth funds to invest in Canadian financial institutions."

So. After somehow being the apparent beneficiary of massive election fraud in which they gained a majority government, The Harper Economy™, as Pogge says, "is primarily based on ripping anything that might be of value out of the ground and shipping it out of the country as quickly as possible."
.
Posted by Alison at 9:27 am
Email ThisBlogThis!Share to TwitterShare to FacebookShare to Pinterest
Labels: budget, China, Election 2011, election fraud, Elections Canada, Enbridge, foreign ownership, Marc Mayrand, Northern Gateway Project, RoboCon, Stephen Harper the Economist, tarsands

Wow! Harper goes through Communications Directors like some go through sox.

I believe that it was the Cons who chose the date for Mayrand's appearance. He had indicated that any day this week worked for him.

"Why do I think Northern Gateway is the common denominator between the BC Liberals and Harpergov?"

Sorry, Boris, accidentally deleted you too.

Boris : Hmmm. Because Harper's Alberta firewall letter cosigner and three-time election war room strategist including the 2011 election, Ken Boessenkool, was also a Hill and Knowlton Northern Gateway lobbyist on behalf of Enbridge prior to briefly becoming Christy Clark's campaign manager and then her chief of staff this January?

Thanks, dBOs, I guess I should've put a sarcastic face in there. Mayrand said any time would have been fine with him; Chair Joe Preston said PROCommittee had nothing else scheduled for the day.

Notable that PROC consists of 7 Cons, 4 DNP, and 1 Lib. Three of those Cons are in ridings where voter fraud has been alleged : Albrecht, Scott Reid, and Zimmer.

Toe, TRM : Maybe he'll go for a DComm who understands French this time.

Alison, yes, I think that project, above all things, is what aligns Ottawa and Victoria.

I'm all for the Chinese building the Gateway Pipeline....of course they have to build the sucker in China!

" The Harper Economy™, as Pogge says, "is primarily based on ripping anything that might be of value out of the ground and shipping it out of the country as quickly as possible."
."

You would think they were stealing stuff, like in the night. Oh yeah, that's right THEY ARE!

"the lifeless cadaver of the Afghanistan fiasco was quietly dumped in the alley as the budget bandwagon made its way down Main Street."