It was Mr. Creosote on the Front Porch with a chequebook 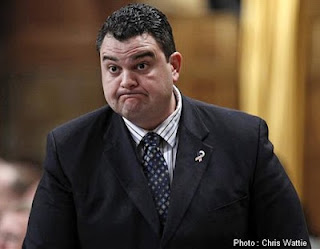 Poor old Mr Creosote.
Steve sent his parliamentary secretary out into the House two days in a row last week to claim the Libs spent "millions of dollars" in the last election hiring a foreign voter telemarketing company with offices in North Dakota - which turned out not to be the case.

Then he put in a bizarre appearance on CBC to insist the Con Party only ever uses Canadian firms but deflected questions about their use by individual Con MPs.

Now of course it turns out to be Mr Creosote and 13 other Cons who hired an anti-choice US Republican voter contact firm, Front Porch Strategies, which made thousands of calls from Ohio in the last election and prints gushy editorials on their website about Steve : “the most powerful conservative leader in the Americas.”
Here Front Porch boasts of their success in the last Canadian election  :


“In May’s federal elections, Front Porch Strategies won all 14 of their races.”

with the help of Con MP Rick Dykstra's campaign manager Jim Ross, who also works for Front Porch as the Canadian liaison.

Today in the House the Mr Creosote got the job of demanding that the Libs release all records of calls made on their behalf during the last election, but stated the Cons have no intention of doing likewise. His reasoning?


“No, because obviously our party is not behind the calls. We know that."


Meanwhile, Guy Giorno, Con campaign boss and former Steve chief of staff, condemns the recent voter suppression techniques as a “despicable, reprehensible practice,” and says he really hopes Elections Canada can get to the bottom of this problem in Guelph.
Um, so we're back to just Guelph again, Guy?
We hope EC can get to the bottom of it too, even though they will have to manage it without the additional investigative powers Chief Electoral Officer Marc Mayrand requested to do the job but was denied in a secret vote by the majority of Cons on the PROC parliamentary committee a week ago.

Don't think that the Party doesn't like that, because they do. They're things that will help the Party, but it looks like it's an organically-grown organization and it just stimulated from the grassroots spontaneously. They love that stuff. And they don't have to bear the burden of having any of it attached to their name."

Hey why did you teach voter suppression then?
http://blogs.canoe.ca/davidakin/politics/the-manning-campaign-manual-on-voter-contact/

Let's take each statement that Guy Giorno makes as true.

1. "It wasn’t possible that anyone below him engaged in dirty tricks without his knowledge."

2. Giorno "absolutely did not" authorize anyone to make phone calls that were impersonating Elections Canada or harassing.

That still leaves a loophole big enough to drive the Conservative Bus through with enough room left over to throw a staffer under it. Does Giorno have knowledge of dirty tricks that were unauthorized but happened anyways? That someone other than him authorized? Did dirty tricks take place entirely above his level or in an entirely separate partition he wasn't in charge of?

Why do these Conservative higher-ups always choose the kind of language that implies something but gives them cover if that implication is false and deceptive?

Maybe after In&Out and the cover-up with forged invoices it became clear that any similar actions in the future would need plausible deniability. While the media takes limited statements from the clean Conservative compartments, the actions of other parts of the operation (including temporary hires and work contracted out) go unquestioned.

Justice needs to be done and needs to be seen as being done. Since the RCMP can no longer communicate with the public without being filtered by the PMO, that means a full public inquiry to get to the bottom of this mess, not just whatever happened in Guelph.

"Mr. Del Mastro clarified later in the day that the Conservatives will give Elections Canada any documents the agency requests."

Assuming that's true, which is a huge if...actually scratch that. Assuming he actually said that, shouldn't you include that given that you link to the article it's from?
http://www.theglobeandmail.com/news/politics/ottawa-notebook/tories-demand-liberals-release-call-records-but-refuse-to-follow-suit/article2359412/
It's at the very bottom btw.

Steve : Akin links to and defends the Manning Centre Manual here.
I haven't read it. However Wudrick's remarks in my post were delivered at a Manning Centre Democracy workshop.

Anon : Good example of clever-arsed parsing is Steve's use of "only" the other day in the House. He said : :
"we've only found that it was the Liberal Party that did source its phone calls from the United States",
which does not at all mean the same thing as what was reportrd :
"we found that it was only the Liberals that ... "

NML : Huh. Well, that last line wasn't there when I first linked to the story 6 hours ago.

One thing...Wudrick's comments were made at an Ontario PC Campus Association conferences, not a Manning Centre workshop.

Anon : Thanks. I've corrected the info at the linked Creekside post. The Manning Centre for Democracy Networking Conference was indeed held
one week later.

BBC reports that PayPal has been asked to produce records by EC:

Thanks, Holly. G&M have it too
.
Con bus getting set to back over Prescott, Ali, and Morgan I reckon.