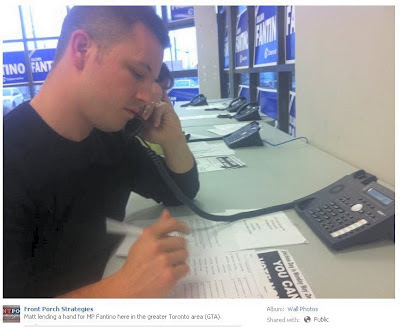 Been just over a month now since I posted this picture of Front Porch Strategies President Matthew Parker sitting in the Vaughn campaign offices of Con MP Julian Fantino with a phone to his ear, a pencil in his hand, and a paper with the header "Election Day is Monday May 2nd - You Can Vote Now" in front of him during the last federal election.
The FPS caption reads : "Matt lending a hand for MP Fantino here in the greater Toronto area (GTA)"

I also mentioned a FPS tweet about their door knocking for Con MP Rick Dykstra plus some of FPS's other Republican pet causes.

Dave over at the Beav was bothered by this. Exactly how, he asked, did the Ohio boys' adventures in the Canadian election square with the Canada Elections Act prohibition on Non-interference by Foreigners?


331. No person who does not reside in Canada shall, during an election period, in any way induce electors to vote or refrain from voting or vote or refrain from voting for a particular candidate unless the person is(a) a Canadian citizen; or(b) a permanent resident within the meaning of subsection 2(1) of the Immigration and Refugee Protection Act.

Good question. I fired off a letter to Elections Canada but did not receive a reply. Well, they have been pretty busy.

Two weeks later, student journos at Brock Press were wondering the same thing and Sun journalist Stephen Lautens had a go at unpacking the EC's language on violating the Elections Act.

Four days ago : Vancouver Observer, April 9 :
Tories may have broken 2011 election rules with US Republican campaigners in Ontario
including this response from Front Porch Strategies' "Canadian liaison":


“They were in Ontario for a day and a half (in April), for the purpose of acquiring new clients,” political consultant Jim Ross told the Vancouver Observer. “They knocked on doors for roughly an hour with Rick [Dykstra], traditional canvassing to identify support. While waiting for a delayed meeting they made roughly 30 minutes worth of phone calls for Minister Fantino, again to identify support.
“Other than teleforums, brief incidental volunteerism as described above over the course of a day and a half that was mostly spent trying to acquire new clients. There was no other involvement.”

Good for VO for getting a response from FPS 'Canadian liaison Jim Ross' but I think they might have mentioned that he was also Con MP Rick Dykstra's campaign manager in the last election before he made the jump to FPS. in November 2011. FPS is not alleged to have committed any improper use of live calls or robocalls.

Today Kady is on it. After also failing to get an answer from EC, she slogged through "through every election-related bill introduced in Parliament since 1997...in hopes of coming across even a parenthetical reference to S331 that would shed light on its original purpose" and comes up thwarted as to what the MPs who drafted and amended it actually intended.

In other cross-border telemarketing news, FPS was awarded a 'Pollie' -  the US political PR industry's Oscar - in Texas this month for their telemarketing success in getting the National Holocaust Monument bill through Canadian parliament.
.
Posted by Alison at 10:52 pm
Email ThisBlogThis!Share to TwitterShare to FacebookShare to Pinterest
Labels: Election 2011, Elections Canada, Fantino, Front Porch Strategies, Rick Dykstra, RoboCon

Did you read that and wonder?

I watched it on Twitter and almost cried. (Except I am not allowed because I am male Orang).

You, my friend, saw it first. You before anyone else. And y'know, you and me have the proof.

I guess that's the game.

The thing is, does that also mean they cannot use a call centre that is not in Canada?

Why on earth did #1 not obtain in Kady's research/analysis? Is this what you were watching on twitter?

So how would we even know where the calls came from?

Jim Ross I understand, now, but why isn't there any mention of Erin Wall, who was highly praised as a new asset by Matt Parker of FPS on March 22, 2011? Its all on FPS's website.

The Vancouver Sun has a write-up on Erin, leaving as a Lobbyist, then ends... except she went to work for FPS..in Canada:

"....It is my great pleasure today to announce an exciting new addition to the Front Porch team.
Erin Wall joins Front Porch Strategies as an Associate having worked in both the private and public sectors in Ottawa, Ontario and brings a wealth of experience to our team." - http://frontporchstrategies.ca/2011/03/

But what may be of a greater interest to your readers is for the same Month a day earlier in March of 2011:

Same Link above: FPS won all 14 of THEIR Races

"In May’s Federal Elections, Front Porch Strategies won all 14 of their races. Contact Jim (905-323-5213 or jimross187@hotmail.com) for more information about how Front Porch can help your office maintain a better relationship with constituents, or create a dynamic communications plan for your campaign."

Hi Grumps. Initial MSM stories about FPS mentioned Wall, who used to work for Tony Clement among others, and FPS bragging about winning the 14 ridings so I haven't repeated it lately.
Good one from Linda Diebel at The Star here.
Emily Dee wrote about Wall a few years ago in connection with the Vancouver Ridley Terminals takeover and connects Wall to Republican Bushie Ken Mehlman through Global Public Affairs, but I believe the GPA Mehlman worked for was just the name of a dept in a larger org and not the same one Wall worked for in Ottawa.

Norlock mentions the phone book, I would surmise, to belie any thought of their having given the CIMS to a foreign company.