Poodling up on the world stage 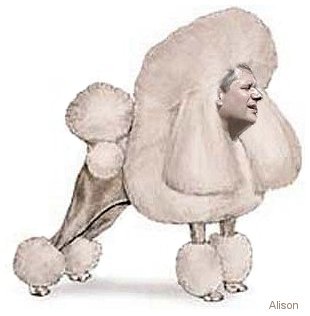 I rather take exception to Glenn Greenwald's characterization of Canada in yesterday's Guardian as the US's "new rightwing poodle to the north".

Sure, we joined the U.S., Israel, and 7 other nations  to oppose upgrading the UN observer status of the Palestinian Authority from "entity" to "non-member state".

And yes, we stood on an even smaller world stage this week with the US, Israel, Marshall Islands, Micronesia and Palau in voting against UN inspection of Israel's nuclear program - 174 to 6.

But hey, when Israel announced it would "punish" the Palestinians for the UN vote by approving 3,000 more settlements, Canada made a point of declining to join the US in making a frowny face about it.

It's so nice to have M'Lady back in business.

No, Steve is plainly Benny Netanyahu's Bum Boy. Not only did Canada not condemn Israel's plan to sever the West Bank, Blair announced Canada could pile on and cut our humanitarian funding to the Palestinians. It must be a horrible sight to see Steve walking around sporting his Rapture boner.

Uberpoodle Baird now walking back his threat to cut "humanitarian" funding to Palestine.
Why?
"Part of the U.S. Security Coordinator office in Jerusalem, the Canadian military mission in the West Bank (dubbed Operation PROTEUS) now includes RCMP officers as well as officials from Foreign Affairs, Justice Canada and the Canadian Border Services Agency.

According to deputy Foreign Affairs Minister Peter Kent, Operation PROTEUS is Canada's "second largest deployment after Afghanistan" and it receives "most of the money" from a five-year $300 million Canadian “aid” program to support the security apparatus of Abbas’ Palestinian Authority.
“We don’t provide anything to the Palestinians,” noted U.S. Lt.-Gen. Keith Dayton, “unless it has been thoroughly coordinated with the state of Israel and they agree to it.”
Yves Engler, Sept 2010

I was going to say something profound, however I can't stop laughing long enough to come up with something