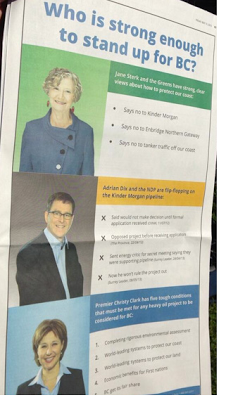 Shorter Christie snorter : 'Hey leftie enviros! If you're not gonna vote for 2nd-place me directly, please at least split the vote by voting for the 3rd place Green instead, promoted right here at the top of my full page ad in the Times Colonist and paid for by "Today's BC Liberal Party".' 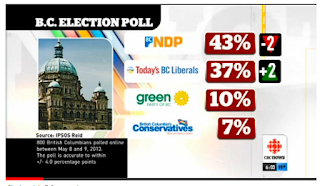 Gotta love that "Today's BC Liberals".
Nothing at all to do with Gordon Campbell's "Yesterday's Liberals" presumably, from whom Christie inherited her unelected premiership.

Hat tip to RossK for Ian Bailey's pic of the Liberals' Times Colonist ad, to CBC for the May 9th Ipsos Reid poll, and most especially to :
Update : And right here I was going to post Kevin Logan's video about how a combination of

1) the June 2010 "Equivalency Agreement" between Harper and the BC Liberals and
2) the TILMA/New West Partnership Agreement between BC and Alberta
effectively prevents BC from prohibiting pipelines from being built across BC to the coast.

But Norm at Northern Insight has posted it along with a nice short precis of the New West Partnership Agreement so go watch it there.
Video creator Kevin Logan's links to back up his research at his own site here.
A little background on the two gents portrayed in Christy's infomercial embedded in Logan's vid from The Tyee.

Economist Robyn Allan says BC could legally cancel the Equivalency Agreement with 30 days written notice on pipeline projects not yet approved, but first of course the Libs would have to acknowledge the effing agreement exists, which would naturally lead to questions about their non-disclosure agreements with their oilbidness buddies even as they simultaneously try to portray themselves as somehow representing the people of BC .

No mention at all of the Liberals locking BC into pipeline agreements before they are even inked in the BC media election coverage leading up to the May 14 BC election unless you count this Vancouver Sun report a whole freaking year ago.  You're shocked, I'm sure.

Monday update : Changed my mind - here's Logan's vid for all you non-clicking-through guys :

I think you're missing something here - Christy's ad also slags Jane Sterk by association. The BC Green Party leader before Sterk, who was also Elizabeth May's director of communications, formerly worked for the federal Liberals and ultimately joined Gordon Campbell's Libs after the election was over.

It's gonna be a pleasure to cast my first Canadian vote against Chipmunk Cheeks and her "Today's" LINOs . . . .

On Friday, with their own Angus Reid poll showing the NDP with a 9 point lead, the Globe and Mail editorial board endorsed Christy.
What a useless fucking rag.

Alison, the polls open in 10 hours.
Post the vid yourself already!

G&M - home of the rousing Harper endorsement every election also.

Anon1 : I think Christy's motives here were right on the surface and I wouldn't put Sterk in the same camp as Christopher Ian Bennett - I really wouldn't.

Well, With the polls now showing the libs winning another majority despite their criminal reign, I guess running a "positive campaign" wasn't the best idea for the NDP. Who are these strategists on the left? Do they have one strategic brain cell between them or do they work for the Liberals? FUCK! They had a stockpile of ammo to destroy the Libs and they Go with positive?

Anon, If it makes you feel any better Bill Tielman on CTV tonight made this comment:

"If this lead holds, it will be the last time in BC and probably nationally that any party will run a positive campaign."

Who needed to learn that? It's the most basic political reality especially when the media is so obviously biased. What rock do these people live under? What delusion of nicey-niceland do you have to believe in to think that ignoring your enemies weaknesses will somehow motivate voters in this apathetic, cynical world? It's colossal stupidity. It's seriously delusional behaviour.

BC votes for liars, negative campaigning, and tanker traffic oil spills. Well done, BC. You get what you vote for.

To all the environment-lite people who took Christy's advice and voted Green because the corporate media assured you this election was going to be a surefire NDP sweep, don't you ever ever mention the environment to the rest of us ever again.

Christy's opening victory speeech remark: "Well that was easy"
I'm waiting for her to thank Encana.

Who is going to fight to reform the media in Canada? There is no hope without media reform.

Amazing. So Christy will continue on as unelected premier having lost her own riding tonight.

Any word on what the voter turnout was yet?

Think of it this way : we will continue to be allowed the vote as long as
1) half of us don't, and
2) the other half that do can be relied upon to vote against their own interests

From Kool, Topp, and Guy 4 hours ago...
Ken Boessenkool: Nick Kouvalis is a genius

I voted but didn't really watch the election. I feel somewhat disheartened, but not surprised. I've sensed since I've arrived on this coast that the provincial politics is pretty much an insiders' game for the politicians. The civil service is out there doing its thing, but the rest of it is Thrones. Concentric circles of influence reign, the outer most of which are so often the voters who are often too Duffy'd to care.

The 130 Alberta companies who purchased Christy earlier this year congratulate themselves on their excellent business sense.