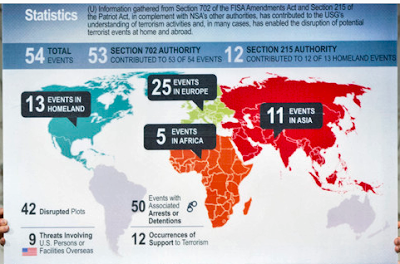 There was a bit of a stink in the media a few days ago after US Senate Intelligence Committee Chair Dianne Feinstein tabled this map "produced by the NSA" purporting to show "the disruption of potential terrorist events at home and abroad" due to its vacuuming up of phone call logs.

At issue is the designation "Homeland" which includes Canada, Mexico, Central America, Cuba and Greenland.
Commenters were quick to point out that the NSA was in fact using a pretty standard map of the seven continents here, but I notice that Europe, Africa, and Asia got to keep their continental designations while the NSA stuck the descriptor "Homeland" on North America.

"Homelands" was the way the US described the 2008 Canada-US deal to allow each other's militaries to send troops across each other's borders during an emergency :
"USNorthCom : Defending Our Homelands"

Meanwhile, in Beyond the Border : A Shared Vision for Perimeter Security and Economic Competitiveness news, a Next-Generation pilot project would permit teams of cross-designated officers to operate on both sides of the border, but there's a glitch...
The Star, July 30 :


"The United States wants its police officers to be exempt from Canadian law if they agree to take part in a highly touted cross-border policing initiative, an internal RCMP memo says.

The debate over whose laws would apply to U.S. officers working in Canada raises important questions of sovereignty and police accountability, says the briefing note prepared for RCMP Commissioner Bob Paulson. "

... a highly censored memo, btw, that's from October 2012 and only came to light under an Access to Information request.

Back in 2004, the FBI announced in an internal audit that it was giving :


agents in its Buffalo field office clearance to conduct "routine investigations" up to 50 miles into Canadian territory.

and that 30% of those agents didn't get approval from Canada first.

In 2006, Public Safety Minister Stockwell Day proudly added that hey sometimes its even more than 50 miles and it's all legal.


Canadian officials say they have made no protest to the U.S. government about FBI agents operating without permission on Canadian soil.

Anyone still unclear how we got from FBI agents operating freelance in Canada as far back as 2004 to being asked to give FBI agents accredited as police officers in Canada immunity from Canadian law in 2012?
.

Bonus : On May 16 this year Harper gave a speech to the Council on Foreign Relations, that US bastion of Manifest Destiny, and took a follow-up question from former US Ambassador to Canada Gordon Giffin. Giffin said he wasn't suggesting outright "political or currency integration", but given it's been 10 years since NAFTA,
"Is there a chance at doing a bigger deal going forward?
Harper runs through the Beyond the Border achievements and blames the US for further lack of progress :

I can't get past The Embassy paywall.
How do you know it will be FBI agents who will be accredited as police officers in Canada?

Anon : From the interview with RCMP Chief Superintendent Joe Oliver on April 14, 2013
"Canadian and American police agencies are currently locked in private talks over how to effectively launch pilot projects that would allow American agents from organizations like the FBI and the US Drug Enforcement Administration to be accredited as police officers in Canada, with the power to arrest individuals on the street like any Canadian cop."

He also noted that after 9/11 and the Smart Border Declaration, Canada and the US were sharing information and decisions within the IBETs, and operating under a “strategic layer” that involved American agents at RCMP headquarters in Ottawa.
The whole framework for how this would work was passed as part of the 2012 budget bill.

The whole framework for how this would work was passed as part of the 2012 budget bill.

That I'm sure every Canadian - and all Opposition MPs - read in its entirety, right?

Ignorance is certainly bliss when your paycheck or pension doesn't require you to pay attention. I am so freaking fed up with how incompetent most MPs are, no matter what the stripe.

Bob, BY : Not sure what they could have done about a majority government tabling a 400+ page budget bill under time allocations.
Elizabeth May and the NDP tried unsuccessfully to hive off the less strictly budget stuff - like environment and foreign cops working on Canadian soil - to deal with them separately, and the NDP proposed over 50 amendments in finance committee hearings, not one of which was passed iirc.

And no doubt M'Lady does!