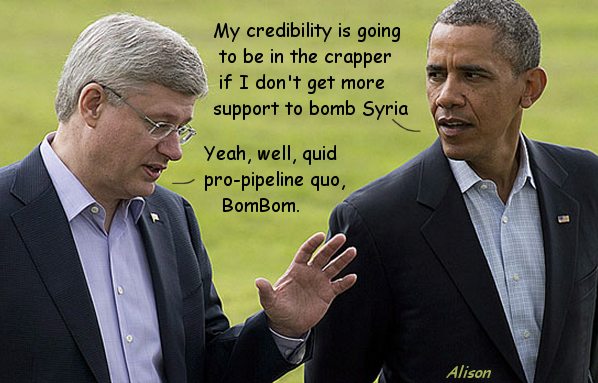 
"America’s credibility will be an immediate casualty if the U.S. fails to respond to Syria now with military action."

This after 2 years and 200,000 casualties and UN reports two months ago that nerve gas attacks were perped by the *rebels*
And I'm sure the Syrians about to be bombed will be gratified to ensure America's credibility does not become a casualty.

Prime Minister Stephen Harper has sent a letter to U.S. President Barack Obama formally proposing "joint action to reduce greenhouse gas emissions in the oil and gas sector," if that is what's needed to gain approval of the Keystone XL pipeline through America's heartland.

Just the fact that Saudi's Prince Bandar and friends have offered to underwrite the cost of a US invasion of Syria should have been enough to give BomBom pause.

It did seem rather unlikely that after his enthusiastic support for bombing Libya, when Obama started up on Syria, Harper immediately said Canada would not be getting involved.

Say it out loud. It works.

Obama has a lot more on his plate than Keystone pipeline. It is Harper's pipedream.

Some pretty good Comments in the Who won and lost post . . . .