Things that go better with Koch

We don't hear much about the Koch brothers' tarsands dealings in Canada so when a headline in the Washington Post reads :
The biggest lease holder in Canada’s oil sands isn’t Exxon Mobil or Chevron. It’s the Koch brothers ,

it's still notable even after follow-up spats as to whether Koch was only the biggest lease holder in northern Alberta or the biggest US lease holder or perhaps only the second or third biggest overall and whether they actually stand to gain on the Keystone XL pipeline given they haven't reserved any space on it. 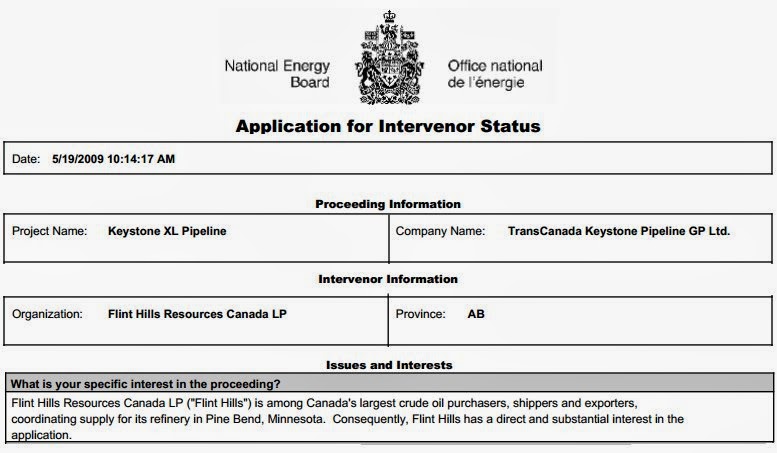 For their part, Koch Industries has repeatedly denied any interest in K-XL one way or the other - despite their Application  to the National Energy Board for K-XL Intervenor Status for their Alberta subsidiary, Flint Hills :

"(Flint Hills) is among Canada's largest crude oil purchasers, shippers and exporters, coordinating supply for its refinery in Pine Bend, Minnesota. Consequently, Flint Hills has a direct and substantial interest in the application."

The National Energy Board passed K-XL in March 2010.
Meanwhile at the same time south of the border, the Koch brothers were brazenly hoovering up members of NEB's US counterpart, the House Energy and Commerce Committee, through their conservative political advocacy group, Americans for Prosperity, which succeeded in signing up 600 lawmakers and candidates to their "No Climate Tax Pledge" in 2010.
Of the 12 Republicans on the House Energy and Commerce Committee in 2011, 9 signed the pledge.

The only other Koch-related news we received regarding Canada, aside from Ezra Levant's  "wonderful summer internship" as a Koch fellow 20 years ago, was that Preston Manning, founder of the Reform Party and President of the Manning Centre for Building Democracy, is also a senior fellow at the Koch-funded Fraser Institute.

Then earlier this month, the Manning Centre held one of their Networking Conferences in Ottawa featuring Adam Guillette, a Koch-connected speaker, on "Recapturing Popular Culture and the Arts" by "framing the debate in narratives".
Guillette is director of development and outreach at Moving Picture Institute, which boasts  Charles Koch's wife Elizabeth as a founding director and board member and seeks to fund and promote young right wing film makers.
Guillette's MPI bio states he was a "founder of the Florida chapter of Americans for Prosperity" which pours money into defeating Democrats, where "he served as state director and head of donor relations".

Press Progress snagged 2 minutes of his Manning Centre speech on how to reframe fracking and charter schools as underdogs instead - shades of Frank Luntz! - plus further notes from it at the link.


Global warming legislation will raise taxes by $1.2-trillion, lose millions of jobs, and even if it works it will only result in a reduction of one tenth of one degree celsius by the year 2100.

The phrases freedom, liberty, and free market also come up a lot.

Radicals who care nothing about the environment but only use it as a tool to sell their agenda ? ! ? !

Bob : I just updated the post with another link to Guillette speaking to Tea Party Orlando. Wow.

FoxNews gave him an Oscars spot to promote "liberty and freedom for film".
He likes Atlas Shrugged apparently.

Bob : X noticed that right off! I think it's a famous line from a Cole Porter song though.

The strategies used by Americans for Prosperity - big money, big data, focused ads, robocalls, ads attacking government - are being taught at the Manning Centre, in addition to which the Fair Elections Act will expand the role of money in elections. The Harper/Hudak/Rob Ford trifecta represent three different faces of the same imported Tea Party con.

Allison I don't know if you've ever run across Greg Palast investigative reporter. he has lots of research on big oil and the dirty money trail that leads eventually to the piper that plays in politics, elections etc. The fact that Koch is big in Albituma (Alberta) and Ezra one of the Koch disciples explains allot. If you haven't check out Palast on Koch brothers;

Hi Mogs : Greg Palast and his famous hat!
Been so long since I've mentioned him on Creekside, not surprised you'd think I'd not heard of him.

One of the really interesting things about Palast's reporting is that unlike many of the Milton Friedman free market fans he skewers on a regular basis, Palast actually studied under Friedman in Chicago.

Alison I have a hard time swallowing ordinary Canadians "Oh I didn't know attitude" they are so selfish they could not care less if a nuclear bomb was dropped in Canada as long as it was not on their street as they bury their heads in the sand.

Greg Palast is one of my go to investigative and I have not followed you enough to know that you knew too. But I figured you would have that's why I said "If you haven't check out Palast..." by reading you I thought you must have but was not sure and was not willing to assume.

The information is all around us we are being screwed by the powers that collude to enslave us yet the average person is so self absorbed they deny it could be possible, let alone anyone could be capable of such bull-tweet and worse be capable of mass criminality. How else can you s'plain the Harper Hoodlums trying the average Joe and Jane on with Kijiji for accountable government statistics on jobs?

I've begun to feel the fools that won't vote deserve this.

Mogs : I guess we politicos all get outraged at non-voters.
I have many friends who don't vote - not because they don't care; some of them are politically active in local issues where it's still possible to make a tangible difference - but because they see federal and provincial voting as capitulating to a sham democracy that does not in any way represent their interests. I could have just used the phrase "feel disenfranchised" here instead but that does not adequately describe what is basically an ethical decision not to enable disenfranchisement. It's perhaps cynicism born of failed idealism and although I don't share it, I have considerable sympathy for that pov.

Yes I can see both sides of the coin too the alternatives stink almost as bad as the cons and yet when we see stuff like the federal and provincial government borrowing from private (foreign & domestic) banks and you have "every Canadian family [is] in hock to the tune of $124,890 due to federal and provincial government borrowing,..."* (2013)In 96-97 the interest payments on the federal debt consumed ~$50 billion or ~30% of federal spending, it went down to about $30 billion or ~13% of federal spending until 2008-09. Since then under the con regime the downward trend has reversed by November of 2012 the federal debt had ballooned to $600 billion.** In 2013 the total (federal/provincial) debt stood at about $1,200,000,000.00 (trillion) and this is basically economic slavery. Ourselves and our relatives forever are now saddled with permanent debt and paying needless interest to foreign banksters. "In 2011, alone, Canadian taxpayers paid the private banks an estimated $37.7 billion to service the federal debt—over $103 million each and every day of the year!5 These are tax dollars that, ceteris paribus, could have gone towards infrastructure, health care, education, and other social needs..."*** Harper does not even have the majority of the popular vote of those that did vote he runs in fact a minority government. All I am saying is that until the silent majority gets off their butts and gives loud notice of their presence we are heading into terrain their own inaction is allowing that of slavery to these people because Harpers policies are designed (he did not design them he just slavishly implements them) to enrich the 1%. Who are these people non-voters are supporting?

Look at what you are allowing:

"...in the late 1990s, the top US Treasury officials secretly conspired with a small cabal of banker big-shots to rip apart financial regulation across the planet..."**** This in effect turned banks into casinos for the very wealthy, which in turn gave rise to these people all you need to get into this exclusive club is to collect a minimum of $1 billion federal reserve notes: "Inside Wall Street's most secret society: The billionaire banker fraternity where cross-dressing new members make jokes about Hillary Clinton and drunkenly mock the financial crisis - Kappa Beta Phi was founded in 1929 and has remained secret for more than eight decades - One reporter managed to sneak into their January 2012 induction for new members - Witnessed them dressed in drag, telling jokes in bad taste and mocking Main Street and the bailout - By James Nye - [1%ers] "...openly mocked the 99 percent and made light of the enormous government bailouts of 2009."*****

The main stream media is owned by these types you can't depend on hearing about this stuff you have to dig as Alison knows. These bozo's along with Ezra and the Koch brothers and their ilk are in power because ordinary Canadians give it to them through their collective silence and non participation. This is what I am talking about when I say they deserve to be enslaved, how much more blatant can I be? Wake up these people are literally stealing from you and making fun of you, this is where the money comes from; you! You allow Harper and Harper is their patsy that allows them to accumulate our wealth through interest and theft of Canadian resources and getting Harper to reduce and remove corporate tax.