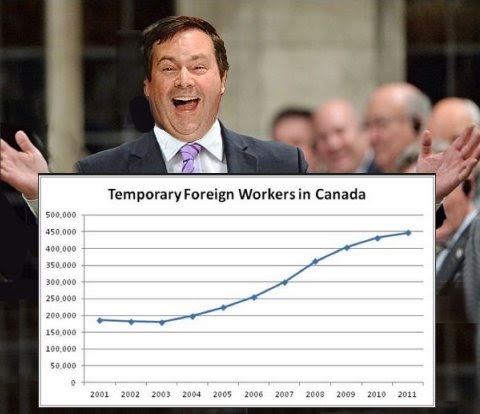 For some time now we have had a government in the business of preventing people from working within their own country, as Boris from the Beav once put it.

This is the Cons' other pet pipeline - their TFW Pipeline.
In 2007 they raised the length of a temporary foreign worker permit from one year to two; in 2011 they raised it again to four years.

And today we add Canadian helicopter pilots to the growing list of occupations that are filled by cheaper temporary foreign workers - some pilots working at half the going wage according to one of them.

The Cons are shocked, shocked I tell you, that employers are actually making use of their program designed to drive down wages in Canada. Who could have foreseen such a thing? As Kellie Leitch once put it : "We expect firms to comply" and by god they do seem happy to do so.

The project ended in 2010, but B.C. and Alberta continued to hire temporary foreign workers by the tens of thousands."

Still, there are appearances to keep up and Kenney has promised "another phase of further reforms" to the TFW program yet again, including fast-food sector suspensions. Luckily for employers though, there's still a workaround ...
CTV :

The government of Canada may have a solution for you.

Under the International Experience Canada program, as many as 20,000 workers aged 18 to 35 will soon be coming to Canada -- just as Canadian youth begin pounding the pavement in search of summer jobs.

The program allows employers to bypass the labour market opinion process, which means there's no need for government approval. As well, companies are not obliged to pay their workers the prevailing market wage."

From the Canadian embassy websites in Spain, France and Ireland :


Many Canadian employers consistently hire temporary workers under IEC again and again in industries such as:

In 2012 Jason Kenney went to Dublin himself to drum up biz, with various employers and recruiting agencies in tow . How'd that pan out again?

A week ago immigration lawyer Vanessa Routley wrote about calling up a recruiting agency in Alberta and posing as a foreign worker looking for a job at KFC in Canada. The whole transcript - from the initial pitch to have her pay $1000 to apply, to upping it to $1250, to downgrading it to $100, to her revealing her real identity at the end - is well worth a read but here's the part of it she high-lighted herself :

One grand for a High Impact Dream Job Pack just to apply for a job bagging chicken at KFC.

Yesterday "the government refused to release detailed information on the controversial Temporary Foreign Workers program on the grounds that doing so "would produce a prohibitively large document."

May Day : Terry Glavin on the "permanent underclass of perpetually 'temporary' non-citizens"


"There were 338,000 people in Canada at the sufferance of the Temporary Foreign Workers program at the beginning of last year. When you add in other non-citizens working or at least entitled to work, including farm labourers, nannies, foreign students, “Experience Canada” exchange students and so on, you’ll find that you’re looking at more than 600,000 people whose subservience and obsequiousness is disciplined on pain of deportation.This is a number of people that exceeds the size of the entire labour force of Saskatchewan  and its existence inside Canada’s already underemployed working class will have implications that should not require an economics degree to comprehend.

This week Jason Kenney said his government has been working on TFW reforms for a year.

January 2014: "Employers convicted of human trafficking, sexually assaulting an employee or causing the death of an employee will be allowed to access the Temporary Foreign Worker program after Ottawa decided to back away from a proposed ban."
http://www.theglobeandmail.com/news/politics/ottawas-new-foreign-worker-rules-drop-ban-on-employers-with-criminal-convictions/article16182157/

"An explanation of the change, published Wednesday in the Canada Gazette, states that Ottawa decided its original plans went too far.

“It was determined that the condition that employers must not be convicted or discharged [to qualify for applying for TFWs] of certain offences under the Criminal Code was too rigid and cumbersome in the proposed form,” the government states.

This is the Harper standard. Not only did they open the floodgates and allow employers to pay 15% less than the going rate, they decided it would be unfair to exclude criminally convicted employers from the program.

Kenney said his solution to the problem of abusive employers will be increased "spot checks".

The Globe and Mail published a 475-page list of employers who are approved for TFWs. Each page has approx. 70 company names. That's roughly 33,000 companies. http://www.theglobeandmail.com/news/politics/which-companies-are-authorized-to-use-temporary-foreign-workers-view-the-entire-list/article11134042/

Not sure how many investigators Kenney has but given the 19,000 layoffs and the planned 9,000 more, somehow I doubt there are enough TFW cops to investigate the tens of thousands of companies and franchises using TFWs.

MyPetGloat : Employers convicted of ... Yeah. Linked in post at "yet another" ;-)

As I said at the time when they also introduced another reform banning foreign workers in the sex trade industry:
"So temporary foreign sex workers are banned because they are deemed especially "vulnerable to abuse", but employers convicted of sexual assault and human trafficking can go ahead and hire TFWs for any other work."

Not sure where you live but here's a BC gov poster from Feb last year advertising workshops on how to get around LMOs:
"Is your business experiencing a labour or skills shortage?
If you are an employer interested in learning how to use an alternative approach than the LMO process to recruit and retain foreign workers, this is your chance to find out directly from program staff. "

Harper to me is, a vile fascist dictator from way back.

Harper is bringing thousands of Chinese over here, for his Northern BC mining plan. BC miners want the Chinese removed. Chinese resource workers have, free transportation, live in camps and are housed and fed. In one Chinese province their minimum wage is, $236 per month. So, the Chinese can be comfortable on Canadian half pay.

Foreign workers countries cost of living, is a fraction of Canada's.

It is laughable by how? Harper is ripping into Putin, over his annexation of Ukraine? Harper says absolutely nothing of China's non-stop menacing and provoking behavior, towards other countries. Nor does Harper say anything of Communist China's horrendous, horrible human rights.

Herr Harper and his henchmen couldn't care less, if their foreigners are exploited and abused by their bottomless pits of greed corporations.

Shame on Kenny. How anyone with self respect, honor, decency, ethics and morals, could ever support a monster such as Harper, boggles me?

The TFW program needs to be completely reviewed. If an application to seven or eight different farms, all located within walking distance in a major provincial agricultural area receives a resume from a Canadian resident, a local resident who is able and willing to work these low-skilled positions; but receives no response, no confirmation of having received a response and is actively recruiting non-residents to fill these unskilled jobs then there is clearly a problem with the labour market.

I keep reading about provincial reasons about how there's a shortage. Well, having gone through the application process I can say absolutely that it is an artificial process and the LMO's themselves are not accurate measures of job intentions.

The McD's and Timmy's controversies are obviously a sign of dire issues with the program. Ten years ago, these jobs would be filled by high school graduates getting their "FIRST" job. Now we have 20 year olds who have never held a job. That's not just ludicrous, it's not just embarassing, it's scandalous. These jobs do not require a lot of training, nor would it be beyond a multinational companies abilities to train individuals to fill these positions.

If a franchisee cannot fill the positions for their franchise, then let it fail. Having it propped up for convenience sake is an artifical labour indicator and ANY LMO would not accurately pray-tell the issues with opening a Timmy's on a major thoroughway.