The BC Northern Gateway Pipeline 21 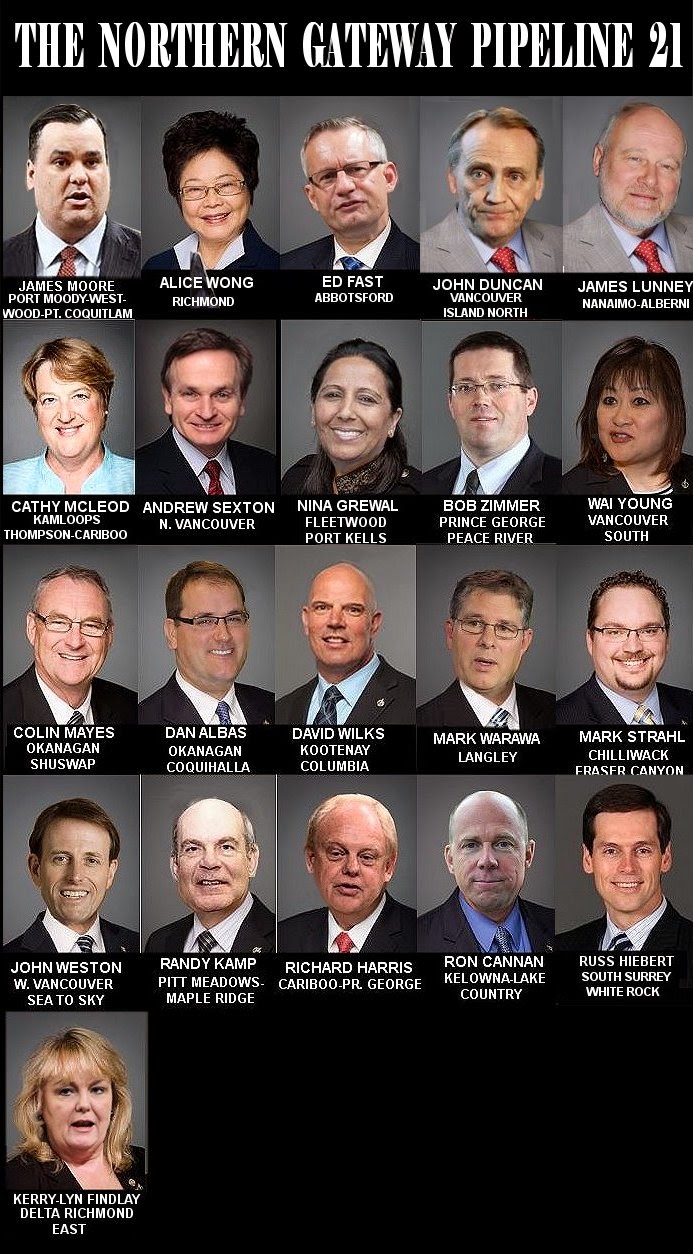 21 Con MPs from BC who apparently side with Enbridge rather than BC.

Bob Zimmer : "The National Energy Board (NEB) Joint Review Panel conducted a rigorous, independent, science-based review, hearing from over 1450 participants in 21 communities and reviewing over 175 000 pages of evidence and 9000 letters."

So how's everyone doing with having elected MPs to represent Enbridge to them? From Nanos :

BTW, Evan Solomon, when frequent CBC  "power panellist" Alise MIlls tells you that the government's pipeline approval is "fair and balanced" and


"internal polling that I've seen from the company that I work with" shows "a much more moveable vote",

that's your cue to mention that the company she works with is the oil industry front group British Columbians for Prosperity.
The group's founder, ex-oilman Bruce Lounds, has said their funding comes from "a combination of private citizens and corporate donations", but according to Mills, "he is no longer one of the key decision makers in the group"  :


Mills downplayed the executive director's statements regarding funding, saying he is no longer one of the key decision makers in the group.  She added that she is, along with a Board of Directors.  She said she would eventually disclose the board's names and full budget.


The best Northern Gateway Pipeline approval quote comes not from any of the above MPS but from the father of one of them, Enbridge lobbyist Chuck Strahl :


“The federal government is loathe to go against expert opinion on science-based reports.”

Subject : You let BC down by siding with Enbridge

Your government just approved the Enbridge Northern Gateway pipeline and supertankers project. But the people of BC have already said no, and this pipeline will never be built.


Over 130 First Nations have created a united wall of opposition and have launched numerous legal challenges. Eight out of eleven communities in the path of the pipeline and tankers have rejected it, including Kitimat, Prince Rupert, Ft St James, Terrace, and Charlotte City. Even the entire Union of BC Municipalities voted to oppose the project, twice.


Only two responses out of 1,161 to the Joint Review Panel were in support of the project, and public opinion polls have consistently shown 2/3 of the province is opposed.
The Enbridge Northern Gateway project threatens our coastal economy, our land, water, First Nations, and our independence as a province to make our own decisions about our future.

As an MP from BC, you let us down. You could have helped defend beautiful British Columbia from the Enbridge project, but instead you chose to gamble BC’s future.
You and your party will pay a steep political price in BC.
Northern gateway will be an election issue in 2015, and I pledge to vote for a candidate who will stand up for BC and stop this pipeline from being built.

Alison:
Apparently James Lunney (we call him Looney) isn't going to run in 2015 so he doesn't care one iota. After all, these are "God" given resources to exploit. Oh well, at least we'll get rid of the costs of his wife travelling at our expense every time the dear boy travels. Russ Hiebert is another one whose family travels on our dime. Their self-serving greed knows no boundaries.

As for Alise Mills, she just blows wherever the money blows. Why they have her on Power and Politics I have no idea, but it is one reason I don't watch anymore. Another reason is that all I see is Evan lobbing soft ones. Nothing compared to Don Newman who was very well informed and at least challenged some of these
birds. I give up!

So now, after years of pushing for this thing, the Cons say this isn't the final approval but just a step in the process, "a maybe" according to a spox for Natural Resources Minister Greg Rickford.

Later on as Enbridge is laying pipe and we bring this "maybe" up, that same spox will be sent out to say "but you knew we already approved it in June"

Also notable that of the 21 BC Con MPs, 13 of them have Campaign Life Coalition's electoral seal of approval for their exemplary anti-abortion voting records and/or individual responses to the CLC questionnaire.

Thanks for the linky to the email to the Gang of 21. I had already filled it out but it reminded me to send out to the Peeps . . . .

Like your "21" poster much better than the Leadnow one you link to.

Which 13 have the Campaign Life seal of approval?

Anon@7:59 : Thanks but I kinda missed the funny here - should have given them all identical suits and ties! Hadn't seen Leadnow's until after I'd finished mine and thought - drat, someone's already done it - but posted it anyway.

Which 13 have the Campaign Life seal of approval?
I'll have to look them up again and leave it here for you later today. Posted that info in a comment that I somehow erased by accident yesterday and could only remember total of 13.