Thanks for yet another letter about how your anti-terrorism bill will crack down on ISIS recruiting Canadians over social media. 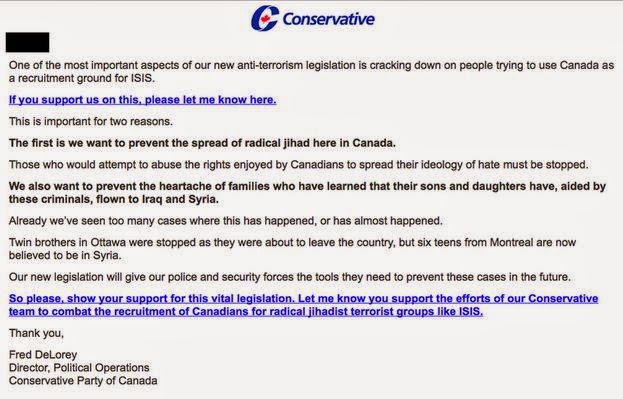 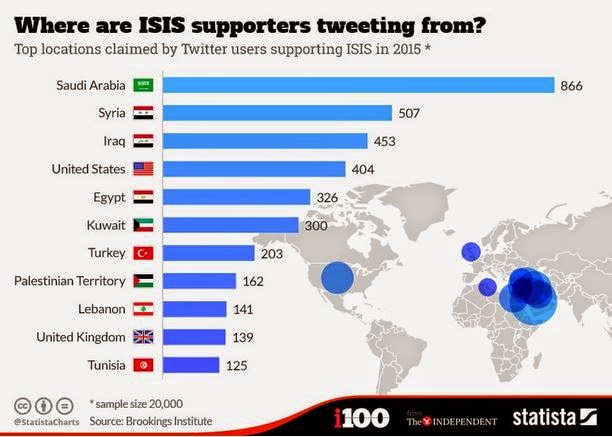 But the show must go on, eh?

Gosh, was it only a year ago you announced a $10 to $14 billion General Dynamics contract to build and sell military LAV IIIs to Saudi Arabia because jobs jobs jobs?

Sadly the whole jobs jobs jobs angle hasn't really taken off for you, has it?
So its jihad jihad jihad all the time instead now and later today Steve will announce in the HoC he's going to expand getting his war on in Iraq and Syria for another year because following the US into yet another disastrous cycle of seeing how much worse the next bunch of rabid killers we will create out of it will take Steve's 'war president' shtick past the next election.

Anyhow, Fred, I wanted to thank you for this inspirational line from your letter :


"Those who would attempt to abuse the rights enjoyed by Canadians to spread their ideology of hate must be stopped."

Yeah, come the next election I think the majority of Canadians will be looking into that.

.. thanks for this.. I had already come across it, but you remind me how nonsense like this needs to be revealed, lampooned to the broad cross section of Canadian society & culture, by Mainstream Media.

Its an example of how the 'Conservative Party' drafts messaging & fundraising, which must be reviewed & approved by the PMO.. inc Ray Novak & likely the PM himself, then blasted out via CIMS database to 'The Base' and any others that devour such clickbait.

This kind of shrill & shallow fundraising propaganda consumes our unelected PMO & their closet siblings who run the Party on behalf of the Harper Government. Whether there is any separation at all between Party & Government is a laughable question of partisan cling to power incest.

What is critical, is that Canadians see this kind of garbage held up for public ridicule.. and to surmise for themselves the kind of folks who perpetrate it.. and who buy into it..

It's interesting how the Saudi connection to terrorism is always ignored or how there's the dual-narrative of Daesh's islamic fundamentalism (which is sunni) and Iranian expansionism (which is shi'ite) as being cut from the same cloth. The recent events in Yemen and the grander geopolitical game being played there highlight the fact that this couldn't be any further from the truth.

Nor should we be supplying light armored vehicles to one of the most brutally oppressive regimes on the planet, however wealthy and influential they might be.


Let us not even discuss its king's funding of jihadi groups

"he's going to expand getting his war on in Iraq and Syria for another year because following the US into yet another disastrous cycle of seeing how much worse the next bunch of rabid killers we will create out of it will take Steve's 'war president' shtick past the next election."

Even allowing that this might be Harper's motivation, and you are probably correct in this, I don't think it should be used to argue that Canada should sit out the horror being visited on the peoples of Syria and Iraq. Do you suggest we stand by as they are slaughtered by a great evil because we eschew war on principle?

Anon@6:49 : The west liked Gaddafi before they didn't like him any more and supported his Libyan opponents with bombing raids before abandoning them to chaos. Ditto Hussein in Iraq; ditto the Taliban and then al Qaeda in Afghanistan - twice. This pattern of destabilizing countries and then abandoning them, creating the vacuum which has led directly to the rise of the IS caliphate, has to stop.
Meanwhile media savvy IS has used broadcasts of beheadings and immolations to successfully manoeuvere western opinion into supporting a military response designed to increase its ranks in Syria, Iraq and Libya while inciting frustrated nutter sympathizers abroad.

IS is just the current "great evil".

The Syrian Network for Human Rights has documented 4 years of human rights violations and atrocities by all parties concerned. I'd be interested in your response.

Anon@6:45 : By the time the co-author of the 9/11 report Senator Graham went on US tv last year to say elements within the Saudi gov were almost certainly behind 9/11, the US media response was - yeah, well, we all knew that already.
Much of that region of the world will be a climate change desert of desperate refugees within a few generations and none of this will matter by comparison.

Salamander : It's hard to get one's head around but everything they do in public is a lie, a puppetshow, so it's little wonder they have so little respect for it.