Omar Khadr, the "James Bond of Jihad", is granted bail. 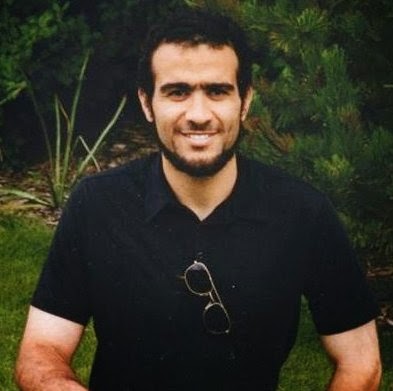 National Post : "One way or another, Omar Khadr will soon be a free man.

On Friday, moments after judge J.M. Ross of the Court of Queen’s Bench of Alberta granted the 28-year-old Toronto native bail from an Edmonton-area jail pending appeal of his war crimes conviction in the United States, the government announced — as predictably as day follows night — that it would appeal."

The government did not argue that Khadr posed any danger to Canada but rather that his release would show disrespect for the US justice system.  You know - this justice system.

It's difficult for those of us who are relatively sane to appreciate the pants-pissing opportunistic hysteria Omar Khadr apparently provokes in those who are not.


Two years ago, the office of Public Safety Minister Vic Toews tacked a few additional "terrorism" charges onto Omar Khadr's Canadian file that were not in his original conviction, based on a *confession* written by the prosecution at the discredited Guantánamo Bay military tribunal :


"Ottawa’s file on Omar Khadr contains faulty information based on a memo prepared by a senior policy analyst for Public Safety Minister Vic Toews ... Among other things, the government alleges the late terrorist mastermind Osama bin Laden was an accomplice of a 15-year-old Khadr, and that the Canadian citizen killed two Afghan militia men.

You following along here?  -  the Canadian Public Safety Minister says Osama bin Laden was the accomplice of a 15 year old!


“Mr. Khadr engaged U.S. military and coalition personnel with small-arms fire, killing two members of the Afghan militia force. He threw and/or fired grenades at nearby coalition forces, resulting in numerous injuries to them.”

Presumably the Ministry of Public Safety's laughable embellishments were garnered from Ezra Levant's appalling book, The Enemy Within: Terror, Lies, and the Whitewashing of Omar Khadr, published the previous year in 2012. Some selections :

Levant describes the 16-year-old GWOT political prisoner as "the James Bond of Jihad", "the biggest, smartest, most deadly fish in a pond teeming with the most vicious, depraved men on Earth", "a degenerate Agent 007," and a “psychopathic” “degenerate” “gangster,” “deranged … every bit as demented as Paul Bernardo, Canada’s infamous schoolgirl serial killer” who "gave himself a licence to kill Americans and Jews."

He wrote that Khadr's - as yet still unproven in any reputable court - act of throwing a grenade was part of his plan to rise to the top of AlQaida and become the "biggest, most brutal Godfather ever" and the "top dog of terror".

How, as Boris is wont to ask, did we ever allow ourselves to be governed by such vile, vindictive, tawdry, incompetent, opportunistic fools?

The silver lining for Khadr is that upon his release, after the government has exhausted all legal means of betraying common decency, he will be living with his lawyer Dennis Edney.
I know -you've seen Edney's 2010 speech before as I like to post it once a year as a reminder of what actual common decency looks like.
Edney :

"We cannot rely upon governments or others to help us make society better. Each and every one of us has to be our own leader."


Saturday Update :
In their attempt to deny him bail, Dept. of Justice lawyers declined to make a case in court that Khadr is either a flight risk or a public safety risk.
Lautens : Harper vs Omar Khadr - You Can't Get What You Don't Argue.

"Instead, they tried to argue that Canadian law - including his right to fundamental justice under the Charter of Rights and that most ancient human right in British jurisprudence, habeas corpus - didn't apply to Omar Khadr because of our treaty with the USA."

So, Khadr, as a child is taken to Afghanistan by his nutcase dad, got caught up in the invasion, and as a result is basically Dr Evil. Yet, the teenagers sneaking away on their own to join ISIS from Canada, the UK, and elsewhere are somehow less culpable, and in need of careful deradicalisation, tracking, and so forth to be reunited with their anxious families and sent into care if not jail?

Bob : Here, if you can bear it, is then Public Safety Minister Vic Toews, now a judge, appearing with Ezra Levant on his SunTV show The Source to trash the Canadian Bar Association over their attempt to uphold Canadian law re Khadr.

I made it thru 5+ minutes of the DDofD vid and had to stop.

What I've never understood is how any of the alleged stuff could remotely be considered "war crimes" or "terrorism". There was a war, in which the US invaded Afghanistan. Khadr is alleged to have fought against the invaders on the side of the country's government. And? So what?
One could argue for holding him as a prisoner of war, maybe until the war was over (which everyone claims it is), maybe until the government he fought on the side of was definitively eliminated (which happened more than ten years ago). But weird charges of terrorism for allegedly fighting back against combat troops who attacked him? It's looney, the most bizarre excess of "victor's justice" I've ever heard of.

That video of Ezra and Toews - what the hell is wrong with these people?

It is frustrating to constantly have to face up to the fact that so many people approach the world in a way that you find to be completely insane.

Of course, they say the same thing about us don't they? The Glen Beck, Ezra Levant crowd.

I don't know what else to say.

Governments---and everybody else---has no right to endless appeal of trial court decisions it doesn't like. It may be given leave to appeal or not, depending on the court's judgement of the reasons behind the appeal. Of course Supreme Court decisions cannot be appealed.

Yes, it is infuriating when governments play the judicial system, but no government has carte blanche on how far they take an issue. Not only a government expose itself to opprobrium in the "court of public opinion", it risks a finding of contempt, or even prosecution under a number of statutes, for malicious or frivolous court action.