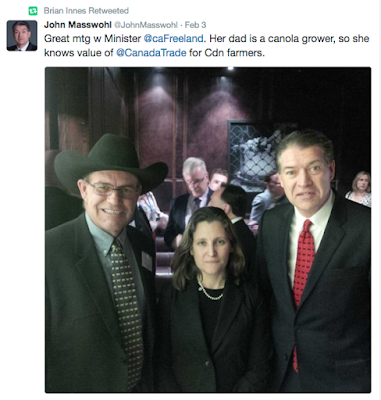 Brian Innes, president of the Canadian Agri-Food Trade Alliance (CAFTA) and tireless retweeter of all things canola, suggests canola growers have a TPP friend in Trade Minister Chrystia Freeland because her dad is a canola grower.
In a 2012 column in The Atlantic, she mentioned her dad's canola and wheat farm is "seven times the size of Central Park".

In his column in the Hill Times a couple of days ago :

Canada can’t miss the boat on the TPP : As Canadians continue to debate the deal, the rest of the world is not standing still ,
Innes notes the HoC Standing Committee on International Trade kicked off its cross-Canada pre-study public consultations with Canadians in Vancouver on April 18.

Yes, it's a "full and open pre-study on the merits of TPP" after Canada signed TPP.
Both Freeland and committee roadshow vice chair and Con MP Randy "Why the TPP is in Canada's best interest" Hoback have explained the TPP cannot be renegotiated - Canada's price of entry to the deal was foregoing the right to either veto or reopen any chapter that had already been concluded.


So how's that TPP roadshow going?

I went. I saw. I cried for what counts as ‘public consultation’.

Only twelve witnesses were allowed to speak. They were allotted five minutes each. Five of the 12 witnesses represented industry associations and interests. There was only room for 60 members of the public. 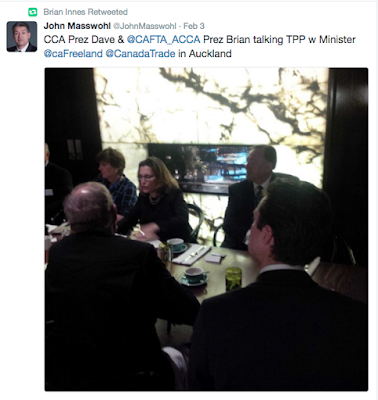 By contrast, the Lobbying Commissioner of Canada records Innes' outfit CAFTA held 72 lobbying consultations with Freeland and other Liberal and Conservative MPs leading up to the TPP signing. Or as CAFTA tweeted as Freeland signed it :
"CAFTA has been engaged throughout #TPP negotiations and had a voice at the table."

As can be seen at left : literally at the table on Feb 3 in Aukland.

"The companies — not farmers — capture any export benefits. These companies can use the trade deal to offshore their supply chains and ship farm and food products back to the United States, where the imports compete with products from American farmers."

They are already doing that of course but would like their politicians to agree on some accompanying trade table manners for it.

President Obama in the NYTimes yesterday :


“It’s one of the reasons that I pursued the Trans-Pacific Partnership, not because I’m not aware of all the failures of some past trade agreements and the disruptions to our economy that occurred as a consequence of globalization, but rather my assessment that most trends are irreversible given the nature of global supply chains, and so we better be out there shaping the rules in ways that allow for higher labor standards overseas, or try to export our environmental standards overseas so that we have more of a level playing field.”

Pretty sure that's not what the corps promoting this deal on either side of the border have in mind here.
.
Posted by Alison at 4:26 am
Email ThisBlogThis!Share to TwitterShare to FacebookShare to Pinterest
Labels: agribiz, canola, Chrystia Freeland, globalization, Obama, TPP

chrystia and Company are only putting on a show to show their "concern" for Canadian citizens. We all know they will tow the corporate line when push comes to shove.

The only hope we have of the TPP going down is if either the US or Japanese legislators nix it. Not holding my breath on that possibility, either.

This link below shows the $billions of ISDS claims against Canada under NAFTA:

The TPP would no doubt result in even more ISDS claims. As would CETA, China-FIPA etc.

"Ultimately, we conclude that an EU-US investment treaty that does contain ISDS is likely to have few or no benefits to the UK, while having meaningful economic and political costs," the report said.

Point 10 of The Leap Manifesto - 'We call for an end to all trade deals that interfere with our attempts to rebuild local economies, regulate corporations and stop damaging extractive projects.' Why sign a trade deal which allows investors to sue Canada if its efforts to stop climate change impinges on their profitability?