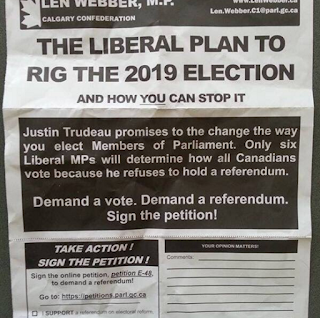 Mr Reid cites the results of a householder CPC MPs sent to their constituents. Shocker : 90.6% of them voted for a referendum.

Complaining that members of the public who show up to ERRE road show meetings are "self-selective" and therefore not representative of Canadians as a whole - a complaint also repeated in committee by ERRE Lib MP Sherry Romanado - Reid calls his survey of 59 Conservative ridings out of a total of 338 possible ridings "the largest sampling of views on this issue to date." Ok but 30% of ridings surveyed were in Alberta. Nothing "self-selective" there.

The 81,000 votes from across Canada returned to the Conservative office or the local riding MP include up to 4 votes permitted per household. To put that in context, 81K is the same number of voters found in the ridings of Ottawa West or North Vancouver.
In Scott Reid's own riding of Lanark-Frontenac-Kingston with 77,808 voters, 1400 responded to his electoral referendum questionnaire ... which works out to a 1.8% response rate.
So, you know, good effort, Cons.

Now Scott Reid has been personally in favour of implementing a proportional electoral system like STV since 2001 and his fellow ERRE member CPC Gerard Deltell also favours PR , but alas their hands are tied by the 2004 CPC founding charter which specifies that any electoral reform must be preceded by a referendum. Apparently their Bill C-23 Fair Elections Act didn't count.

Reid also reported he thinks a five-party committee consensus to proceed with a PR system is possible, that a public referendum on PR would pass, and that Elections Canada CEOs JP Kingsley and Marc Mayrand have said there is time before the next election in 2019 for both a referendum and a new electoral reform system provided the new system is not unduly complicated in the redrawing of ridings.

So why are the CPCs the fly in the electoral reform ointment?

Reid notes that Minister Monsef has not proposed any specific model to replace FPtP or pledged to accept the committee's consensus position, supposing they reach one after this referendum ultimatum.
Reid :


"Up til now, she has only said she'll take it under advisement so we can move towards that model. What I don't want to have happen is this : have the committee move towards some kind of conclusion and then the government says 'thank you very much, we're doing something else' because we have an ironclad commitment about 2019 and then impose a system that favours the governing party. That would obviously be completely unacceptable and I am anxious at all costs to make sure that doesn't happen."

I get this concern. I do. The dreaded Alternative Vote, a non-proportional system considered capable of keeping the Libs in power forever because the Libs are everyone's presumed first and/or second choice on a ranked ballot in a single seat riding, is right there in the ERRE committee road show handout and was included in the public e-consultation on the ERRE site.

But after months of sending out householders like the one pictured at the top here - sent out prior to the committee rejig in May which allowed the Bloc and Elizabeth May a seat at the ERRE table and reduced the number of Liberals on committee from a majority of six down to four Libs plus the chair - together with your failure to hold town halls in your communities to inform yourselves and voters about possible alternatives to FPtP, and the fact your official seven page Conservative Caucus submission to ERRE today is about nothing but holding a referendum ...  well, Cons, you failed miserably at reaching out further afield than just to your dog-whistled fear-mongered householder base here to achieve that all-party consensus you claim to aspire to.

The Committee's mandate was doomed from day-one because single-member-plurality was excluded from the field of options. You couldn't bias the process more---except maybe by Soviet-style single-candidate ballot.

If pro-rep's so good, it should be able to compare itself successfully against all other alternatives, including SMP. I still contend, however, that it's a bad fit with our Westminster parliamentary system, in particular the requirement of Commons' confidence in cabinet which gives rise to a number of aberrations of pro-rep's stated ideals when parliaments are hung, as they will probably almost always will be under pro-rep.

I think the Liberals are gaming the reform process by relinquishing their majority; now they'll be able to throw their hands up and say "Oh well, we tried!" when a consensus isn't achieved and they can't push it through by superior weight on the Committee. I don't think any politician easily ignores the fact that surveys show most Canadians want a referendum.

What is this single-member-plurality of which you speak? Just another name for first-past-the-post, which we have had forever experience with already. A majority of people voted in the last election for real representation, inclusiveness, an end to the pettiness and divisiveness which only benefits parties not the people. Time for Canada to implement an electoral system that permits and reflects our growth as intelligent actors to flourish.

It's hard to vote for an alternative system when you have no experience with it in practice. So, I'm all in favour of a referendum - AFTER voters have had a chance to try a different system. Then it makes sense to ask which you prefer. Not before.