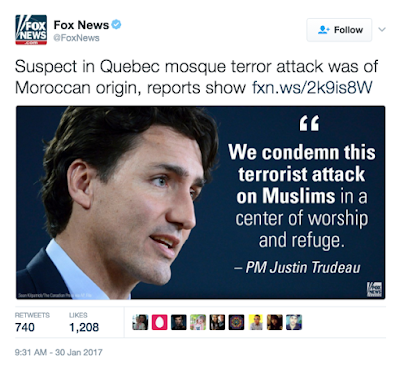 The Suspected Quebec City Mosque Attacker Was a Right-Wing Troll for Trump
But Fox News and the White House quickly pointed toward Islamic terrorism.
http://www.motherjones.com/politics/2017/01/fox-news-quebec-city-mosque-attack-right-wing-shooter

This is where they get their news.

Suppose its just crickets from her 'friends' now that the suspect is a pony from their stable.

Sigh. I'm angry and sad. And frustrated that the some of the first victims of the violence of the new government south of the border were some hapless Canadians in their own country.

Dear friend,
What’s really going on at the mosque in Quebec City?
Last night, two armed gunmen burst in, killing 6 and wounding 19 more. It was a horrendous attack that must be condemned.
And immediately it was. But within minutes, before any facts were in, the mainstream media had already made up their mind about what happened: it was “Islamophobia”. Some journalists — and even a Muslim Quebec politician — said that Donald Trump was to blame.
But an eyewitness at the mosque said one of the gunmen shouted “Allah Akbar”. That’s what a Muslim terrorist says, not an “Islamophobe”.
At their press conference this morning, Quebec police refused to name the two suspects taken into custody last night. Why?
But the names leaked out anyways: Alexandre Bissonnette — and a Muslim named Mohamed Khadir, who was later called a “witness” by police.
What’s going on here — did a Muslim attack a mosque? And who is Bissonnette — a friend of Khadir? A convert to Islam? Or an anti-Muslim murderer?
What are the facts? And can we trust the mainstream media to tell us the truth?
I don’t know the answers. But I know this for sure: we won’t get the whole story from the CBC, or the rest of the mainstream media. They’re less concerned about straight reporting, and more concerned with protecting the official narrative — Muslims are victims, not terrorists; Canadians are racists; anyone worried about radical Islam is a bigot.
You could practically hear their disappointment to learn that one of the men arrested last night is named Mohamed.
Well, we don’t know all the facts yet either. But unlike the CBC, we intend to uncover the truth, not bury it.
So this morning, our own Faith Goldy went to Quebec City with our cameraman Alex — as I write this e-mail, they on her way to the crime scene. She’ll ask real questions, and follow the facts wherever they lead.
We’ve set up a special website for all of Faith’s reports from Quebec — click here or visit www.QuebecTerror.com. Make sure you go there for the other side of the story, especially if you’re getting your news from the Trudeau propagandists at the CBC.
Booking a flight for Faith and Alex on short notice cost us $1,276. And two hotel rooms, for two nights, was another $560. Add in cab fare and some meals, and we’ll be close to $2,000. If you can help us crowdfund the costs of this trip, please do — by clicking here, or visiting www.QuebecTerror.com.
Thanks for your support.
Yours truly,
Ezra Levant

P.S. This is a very important story, and it will be covered extensively by the CBC — in fact, Faith told me that Peter Mansbridge, and his whole luxury entourage, were on the same flight to Quebec City as her.
You can see why: the CBC is already working hard to downplay the fact that at least one of the arrested men is Muslim himself. On the front page of the CBC’s website right now, they’re literally promoting a story claiming Trump is causing hatred here in Canada.
P.P.S. Our entire budget for this trip is $2,000 — that’s probably Mansbridge’s nightly hotel bill. Unlike him, we don’t get $1.5 billion a year from Justin Trudeau. We rely 100% on viewers like you. If you can help us, please do, by clicking here. And tell all your friends to tune into www.QuebecTerror.com too.

Oh, there's no bar too low for that guy to stir the shit with - and ask others to pay for it.

Boris: "Suppose its just crickets from her 'friends' now that the suspect is a pony from their stable."

Some 16 hours after the initial *reports* it was a Muslim terrorist or two had been already debunked, the 'friends' have not taken their posts down nor has Kellie Leitch seen fit to delete them yet. There are hundreds of them, with later posts mostly written by sane people trying to get them to see sense, or giving Leitch whatfor for providing a platform for them.


"I'm angry and sad. And frustrated that the some of the first victims of the violence of the new government south of the border were some hapless Canadians in their own country. "


Anon@2:09: Thanks. I think. The comments at that QuebecTerror site are just absolutely bonkers.

Hi, Alison. I just took a look at Leitch's FB post. She finally attracted a wave of comments most of which held her and her dog whistle campaign complicit in inciting Islamophobia. It was encouraging to read the reaction. Her redneck, knuckle draggers' comments were still there only they've been drowned out by the disgust she has so deservedly attracted.

I wish I didn't have to share a planet with these troglodytes.

(Not that I have plans to remove any of them from it.)