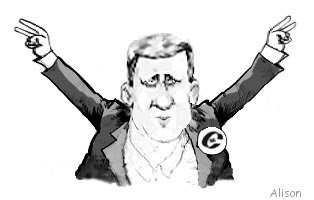 Buckdog discovered this very good post at The Guardian yesterday.
Here's the part he quotes, in case you missed it :

"The historian Garry Wills once observed that Richard Nixon wanted to be president not to govern the nation but to undermine the government. The Nixon presidency was one long counterinsurgency campaign against key American institutions like the courts, the FBI, the state department and the CIA. Harper has the same basic approach to politics: attack not just political foes but the very institutions that make governing possible. The state for Nixon and Harper exists not as an instrument of policy making but as an alien force to be subdued.

Canadians have never had a prime minister who has literally made his career attacking and undermining the legitimacy of Canadian institutions. Until now."
Posted by Alison at 12:06 am
Email ThisBlogThis!Share to TwitterShare to FacebookShare to Pinterest
Labels: Harper

Surely it's time for the "I am not a crook" speech.

This caricature is fantabulous A.

And so continues the inevitable disrobement and hobgoblinization of a nasty little man.

The amazing part is that none of this is even slightly hidden - Tom Flanagan bragged about precisely this governing philosophy as I blogged about here.