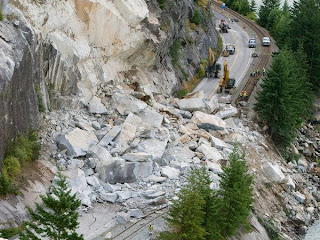 This happened just across the water from me last night : a cliff face collapsed onto the Sea-to-Sky highway and the rail line between Vancouver and Whistler.
75 meters of what will be the route to the 2010 Olympic Games is buried in rubble 10 meters deep and will take at least five days to remove.
We must have heard it but as there has been blasting over there every night between midnight and 2am for weeks now, no one would have thought much about it. I wonder if all that blasting had anything to do with loosening that cliff face? In addition to the earthquake in California yesterday, another one in Port Townsend today, and the fact it rained all day yesterday for the first time in weeks. But about all that blasting and road construction ...
2010 Games boosters were immediately on damage control :
Premier Gordo Campbell :

"This is an area that was not touched by the improvements that we're making."

"The area where the slide occurred is not part of the $600-million Sea to Sky Highway Improvement Project, so it has not been worked on recently by construction crews."

"There's no need to worry about a similar incident during the 2010 Winter Olympics. I'm very confident we'll have a situation in place to deal with these things," he said. "We will have contingency plans."

"It's one of the reasons there are two separate athletes' villages -- one in Whistler and one in Vancouver."

"A slide during the Olympics would not ruin the games."

Yeah but it could totally ruin the day of anyone caught under 1600 cubic metres of rubble, couldn't it, Irene?

"To mitigate any short-term transportation challenges between Vancouver and Whistler, athletes, officials, and the majority of personnel required to stage an Olympic or Paralympic event in Whistler will be housed in the Whistler area, so events will proceed on schedule."

Well, events proceeding on schedule is the most important thing about a rockslide I guess.
And 'short term transportation challenges'?
You mean like the bus driver who thankfully had the wit to floor it out of there as the rockslide smashed into his bus?
So far no one has been reported trapped in the slide - the dog patrols are out sniffing now - but this is a notoriously dangerous highway : 14 major landslides in the last century, with 19 deaths and over 800 accidents in the last five years alone. A rock slide in 1996 was 60,000 cubic meters and another in 1990 took two weeks to clear.
Well you know I'm not a huge fan of the two week Five Ring Circus urban renewal project and I'm bound to be crabby about this so let's hear from a professional - geologist Colin Smith with Vancouver-based Fundamental Research Corp :

"The Sea to Sky Highway route in the Porteau Cove area is one of the worst possible places to build a road. In fact, Tuesday's slide near Porteau Cove may have weakened surrounding rock structures to the point of making a future slide in the same area more likely."

but, but, but ... Transportation Minister Kevin Falcon said, "There's going to be a lot of rock-bolting ... and we will have all the contingencies and eventualities in place."
Colin Smith :

"I don't think rock-bolting really would have done a whole lot," he said.
"Over time there's not a whole lot you can do, especially when you exploit the weakness by undercutting the structure with the road."

"The slide was "nowhere near" roadwork on the highway."

Meanwhile 15,000 to 20,000 people are stranded in what the papers have taken to calling "the affluent alpine village of Whistler" for the next five days.
Now what was that again about "an imaginative combination of road, rail, marine and air" options in our bid for the Olympics again?
Posted by Alison at 10:59 pm
Email ThisBlogThis!Share to TwitterShare to FacebookShare to Pinterest
Labels: 2010 Games, Campbell, Falcon, Hansen, sea-to-sky highway

Lovely. My first thought about the landslide was to wonder about a connection to the earthquake; but the construction seems to be a likely explanation.

Off topic: did you see this article by Jerome R. Corsi saying that Robert Pastor says SPP is dead?

(found the link at FD)

WEB : For more of the same!

Holly : Yes, I did, reposted all over the web. Personally I think it's just pining for the fjords.
Seriously, it accomplished much of what it set out to do and is only undergoing yet another facelift.
Did you see Avi Lewis and Linda Carlsen on Democracy Now ?