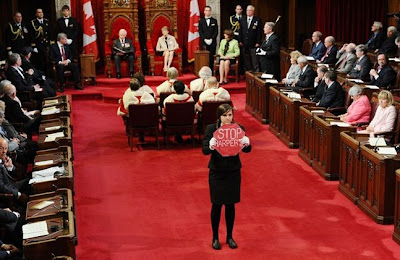 Senate page Brigette Marcelle DePape, 21, stood silently holding up a Stop Harper stop sign for 20 seconds during the Speech from the Throne today before being ejected from the Senate Chamber and fired.

Here she explains the reasons for her gutsy protest to CBC's Evan Solomon :

Shorter Solomon : Why didn't you choose some other venue for your protest that nobody would have paid any attention to?

Liberal MP Carolyn Bennett called the protest by a security-cleared employee "an abuse of parliamentary privilege."  "There's lots of room for that out on the lawn, or whatever," she said.

Lots more stuffy tut tutting all round in the media and from other MPs, including Elizabeth May, about "respecting our heritage" and "protesting appropriately".

They can all just stuff it. Because Brigitte's 20-second silent protest doesn't even begin to approach the level of contempt both Harper and our chamber of sober second thought has been dishing out to Canada lately.

Conservative Speaker of the Senate Noel Kinsella tonight: "The incident raises serious security concerns which the Senate will fully investigate."

Well fuck me that was sure a close call, eh?

The professional pols and MSM representatives all showed their lack of understanding of the depth of dislike for harper and his ilk. More evidence of them being totally out of touch with what "representative" government is all about.

Solomon is such a prick. The media has really lost all integrity as have so many politicians.

Brigette represented the majority of Canadians in that 20 seconds than either the MSM or opposition parties in the past 6 years.

WTF Evan Solomon is aghast that someone would use the floor of parliament to express their political views?

We can't have that now can we. What's next democracy, the horror

Evil will have to get off its chopped Triumph-Cycle when powerless pages do something.

Solomon is a wanker. Three cheers for Bridgette! Now let's everyone stand up to these bullies!

Harper has no respect for the Canadian citizens what-so-ever. Harper is an arrogant, vindictive dictator. He has embarrassed Canada on many different occasions, at meetings with other country's.

The American politicians have said, Harper is a petty gasbag. Harper was bad enough with his minority, with his majority, he is impossible.

Our Constitution is ignored. Our Civil Rights and Liberties, have been taken away from us. There is no more Democracy and Freedom in Canada. Harper has got rid of everything, that Canada used to stand for. Canada has now lost the great respect, of many other country's, because of Harper's stupidity.

Wikileaks has said, the N.A.U. is on the way. Harper intends to be a big shot, in the N.A.U. However, Obama doesn't like Harper, he doesn't have the ability to get along with others. Harper is far too stubborn, to work with. The American citizens, despise Harper. Every meeting Harper attends, he always manages to anger someone.

I can't see, Mexico, Canada and the U.S. as one nation. Harper will fight with anyone opposing him. Hang on to your hats people. The merger of the three country's, is going to be one hell of a ride.

I think the photo credit goes to this guy:
http://www.seankilpatrick.com/

Thanks, Milan - amended. I should have looked it up myself in the first place.

And I do hope you are all clicking through to Boris' great rant at the bottom of the post.

Great service, thank you Alison.
The next four years (... sigh, could it be eight?) will see our 'great north strong and free' with its deep rooted legacy of the commons and active social conscience struggle for survival.
The 'agenda' starts already ... no throne speech debate, tar sands plunder, punishment and guns ... what a nightmare. Do you imagine the worse is yet to come?
Keep Brigitte de Pape in your imagination ... "feisty" come on Solomon don't be so condescending. She's not cute and feistey, she is a realist and hard as nails.

She isn't brave. Brigette pulled her stunt for nothing other than self interest and promotion. She was at the end of her contract as a page and is a left wing bobble head. What better way to spruce up her resume to get hired by any number of leftist organizations then to pull a stunt to embarrass the government in a country where you won't be killed or imprisoned?
And after she was released from security she went out and did a press conference where she spewed every lame-brained NDP talking point she could think of for the camera. Now she is being offered jobs by every left leaning group out there including Micheal Moore. She isn't a hero. She's an opportunist. The people who faced Soviet tanks in the streets of Prague in 1968 were heroes. Brigitte is a ZERO. A self absorbed leftist brat whose own father is ashemad of her, and rightfully so.

Robert L : Yes, she had three weeks left in her contract. How is that relevant? Is there a cutoff date for acts of conscience?

She has not set herself up as a hero - she has just acted. If protesting were easy everyone would do it.

Brigette DePape's father :
“Brigette is very passionate about the state of the world and what she thinks the world should be like. She is always looking for peaceful ways to express her caring and her interest, her desire to see improvement. At times these can be unconventional, but that is her choice. No one works harder than Brigette and her creativity, toughness and determination are second to none. We have always encouraged our children to try and ‘make a difference” and are proud of the many important things they have accomplished although this event may have stretched our sense of how to accomplish that,” Denis DePape said in an emailed statement to Global News.

Harper is the very worst thing that has, ever happened to Canada. He is giving this country away. The N.A.U. has been his evil agenda all along.

Harper is an arrogant, vindictive dictator. Our only hope is, the Americans don't like Harper. They consider him a petty gasbag. He is too stubborn to get along with anyone else. He just could, get ousted on his butt.

The American citizens say, Harper's election win was rigged. That i can believe. He was demented, rabid and frantic to win this election. He actually begged for a majority. Well over half of the Canadians people, did not want Harper as P.M. We said, if Harper gets a majority, we can kiss Canada good-bye. And, we will.