Kinder Morgan would like to dredge the Second Narrows 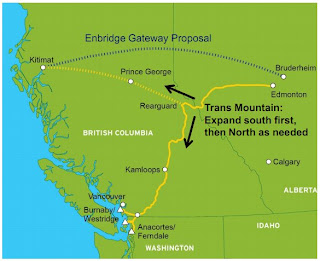 so that Suezmax oil tankers carrying four times as much crude as spilled from the Exxon Valdez will be able to access the Vancouver Harbour Westport tanker terminal on the southeastern shore of Burrard Inlet.

Note the word "rearguard" on the map.
Apparently the Northern Gateway Enbridge pipeline from Edmonton to Kitimat is just taking too darn long so why not get started on shipping tar sludge to China via Vancouver Harbour first and then reroute to Kitimat later "as needed".

The Tyee has the story.
.
Posted by Alison at 9:37 pm
Email ThisBlogThis!Share to TwitterShare to FacebookShare to Pinterest
Labels: BC pipeline, Kinder Morgan, tarsands

And I'm sure we can count on Chipmunk Cheeks christy to oppose this vigorously, right?

The Enbridge pipeline and the dirty Chinese oil tankers, were a done deal, by Harper and Campbell, before Christy was even on the scene. There will also be American oil tankers to pick up the dirty tar sands sludge as well.

Christy has no say over BC's natural resources. Harper and Campbell have already stripped BC of our assets and resources.

It would please the BC people, to keep the filthy grunge, out of our beautiful northern coast. Enbridge has a bad record for pipeline bursts. We don't want their pipeline, across our hundreds of rivers, streams and a vast expanse of land. By all means, send the dirty oil to Vancouver.

The Alberta dirty tar sands, is the dirtiest energy on the face of this earth. Athabasca Lake has deformed fish. The mighty Athabasca River has oil, heavy metal, mercury and cancer causing agents. The huge Athabasca watershed in contaminated. The caribou are dying. Another flock of ducks died, landing in the filthy sludge. A first Nations village has a, high number of cancer victims. Even the rare cancer of, exposure to petroleum. The atrocity is completed by, that eco disaster is permanent. There is no way to clean that abomination of a mess up.

Enbridge has a bad record of pipe bursts. The Kalamazoo River was a disaster.

The pipeline burst out of Edmonton, is another disaster. The poison has leached into the underground water. The First Nations children, were so sick, because of the spill, they can't go back to their school.

We poison our lakes with, toxic mine waste being dumped into them. This also leaches into the eco system. This poisons all the wildlife and fish that use those lakes, rivers and streams.

We can't drink oil, nor eat gold and copper. We can't eat food from poisoned land.

Man is the most destructive animal on earth. Our oceans are dying, our rivers, lakes and streams are poisoned. Our air is poisoned. Man is even polluting space, with debris.

Clean drinking water will become more valuable than, all the resources. Read the water war crimes. Canada already supply's some of the states and Mexico, with clean drinking water. If we don't stop poisoning our water, we will not be able to live. EVERYTHING dies. Wake up people, because, greedy giant corporations, refuse to wake up.