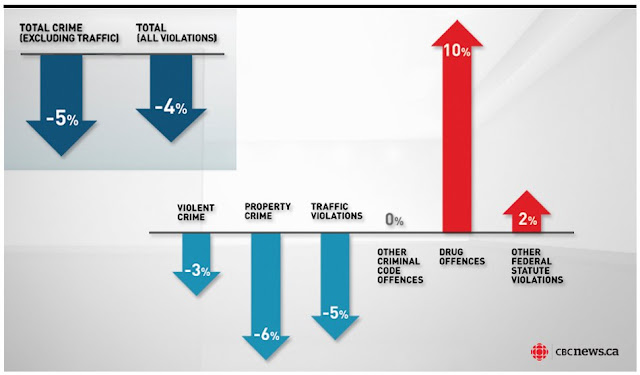 "Canada's national crime rate has been on the decline for the past two decades and has reached its lowest level since 1973, according to Statistics Canada. The total volume of crime, representing nearly 2.1 million Criminal Code incidents, fell five per cent in 2010 from the previous year, said the federal agency. The Crime Severity Index also dropped six per cent to its lowest point since 1998."

And if you go to the original you can hover over the arrows for specifics.

But holy crap - look at that big red arrow showing the increase in drug offences! That's terrible!
... hover ... hover ... OK, never mind - it's just that stupid marijuana bullshit again - due to get appreciably worse with the Cons new dumb-on-crime bill :

CBC : New pot laws could overwhelm BC jails, as anyone convicted of growing six plants will get a six-month minimum sentence . 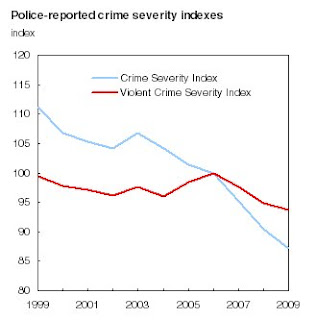 Tabatha Southey wonders why a government that "defends its new sentencing laws as necessary, despite the fact that crime is down, with the statement that they're “not governing on the basis of the latest statistics” " ie facts, is nonetheless happy to pay $90,000 a day to outside consultants brought in to look for them.
.
Posted by Alison at 3:38 pm
Email ThisBlogThis!Share to TwitterShare to FacebookShare to Pinterest
Labels: tough on crime, War on drugs

Clearly you are forgetting about Stockwell Day and his 'unreported crime' file.

You and I and many of our mutual friends know this is utter bullshit. But sadly, on a daily basis, I see more and more people falling for this Harper incited frame of referencing of what is wrong with Canada. Seriously, I am shocked by how many colleagues and friends who I considered progressive are actually starting to buy into this right wing propaganda. I try to set them straight without sounding dogmatic but it's freaking hard. The key messages have been drilled into their heads by the freaking media they listen to.

BY : I'm sorry you're still dealing with that - it's terribly isolating and also scary to consider how vulnerable we creatures are to allowing the wrong stories into our heads if we hear them often enough.
It's a slow go, BY, but look at all the resistance out there - Occupy Wall Street, the tarsands protests.
Some people say we are not as activist as in the 60's and 70's. Why use that as a benchmark, I say. Why not compare us to the 50's with its one monolithic story badly told and no one at all in the streets?
Keep your chin up, girl.

I wonder with the lunacy of the proposed drug laws (longer sentences for marijuana growers than for child rapists) that juries might start refusing to convict no matter what the evidence. I wonder too if Stevie Blunder might have moved too early in trying to pass such radical legislation before he's had a chance to pack the courts with his finger puppets.