The Guardian : The call to occupy Wall Street resonates around the world *

Thanks so much for that, Canadian MSM.
Three Koch-funded tea-baggers communing in a bathtub have you all flying in film crews but the occupation of Wall Street somehow reminds you how important the Emmys are to all of us. 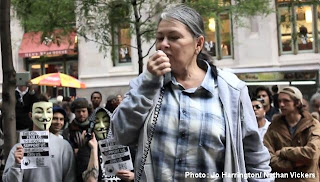 Roseanne Barr speaks at Occupy Wall Street and announces her run for presidency.


The most fascinating part of the livestream coverage for me over the weekend was the really incisive discussions and then, after the NYPD demanded no signs and no amplifiers for speeches, watching hundreds of people learn the logistics of direct democracy in a decision-making process : how to give everyone a voice without a hierarchy and how to use the "human microphone" to ensure all are heard.
Everyone watching via the net learned from this. An invaluable lesson.

Statement from the occupation at Wall Street

Nothing in the Tyee, but Rafe Mair is relevant (from No.1):

"...The media also lies like dogs but their method is to remain silent on things that adversely reflect on their good friends, the establishment..."

Vancouver Sun put up a piece an hour or so ago:

It is suggested that the MSM wondered why such an event that was pushing to end corporate person hood was demanding the corporate owned media’s attention. So they showed them whose side they were on. Petty and a dereliction of duty. Also we do not have to question the PTB did not want it to get big by attracting any media attention.

A lot was learned Alison, that leaderless and without demands, the media was confused, LOL.

Anon's two links are from Sunday and it sounds like there may have been more people there today than yesterday:

The Globe&Mail put something up just now.
Pictures of protesters on Wall Street
Like Holly Stick's Vancouver Sun link, it's pictures only though because no one sent them a press kit telling them what to write about it.

Goad and Flail has photos:

You know I loves ya but I am not entirely sure this is fair Alison. HuffPo picked up the ball Thursday, Washington Post and Bloomberg Friday. Over the weekend all the NY-based papers were on, plus NY Mag, although I believe most of their coverage was web-only. Today there has been an explosion of coverage, including a photo gallery in The Globe and stories in Postmedia.

Hey Antonia, loves ya back. I was bitching about no coverage from Canadian media - hence post title ;-) - of which, aside from yours, there was exactly none when I wrote the post at noon.

Tah for updated links, everyone.

Believe it or not, the new social media curator for the new-fangled CTV Question Period with Kevin Newman and Craig Oliver - Colin Horgan from iPolitics.ca - flagged this story on the Sunday as one to watch.

Good job, Alison - Looks like AALAN* is gonna be my primary source of information in the future . . . .

If you really want proof of "harmonizing" between US and Canada, have a look at this recent announcement that NO ONE in any media covered to the best of my knowledge, despite a press release being issued.

August 3, 2011
TORONTO – The American Bar Association and the Canadian Bar Association are preparing to sign a historic agreement that will lead to enhanced cooperation and information exchanges between the two organizations, their in-house counsel constituencies, and the U.S. and Canadian legal professions. ....

It's interesting to note how quietly this has been "announced", although one can be sure there will have been lots of actions taken before any "public announcement". I have specific examples of harmful "harmonization" of laws that are already underway, if anyone's interested.

Beware Canada -- the quieter the media is on an issue, the more important it is. Not in a good way, either.

This doesn't sound good at all.

Anon : That dovetails with US AG Eric Holder's presser last week about Canada needing to update its sentencing laws, also not carried in any media.

Yes, of course we are interested in your further examples. Off to work for a few hours now - will blog this when I get back. Thank you for this.
You can e me at The Galloping Beaver if you prefer.

My two-cents: I clicked on the link yesterday and was treated to an ad for a cleaning product of some sort.

Then I saw a person talking before a small crowd, to occasional applause from the tiny group of people listening.

I thought: Same old, same old. The already converted preaching to themselves as the world rushes by in blissful ignorance.

That having been said, I agree with you that if they're going to elevate the chumps in the tea-party to the extent that they do, then the mainstream media ought to increase their focus and coverage of left-wing protests by 500% from where their coverage is now, if only to equal the seriousness with which they cover the tea-party.

To Thwap and Holly Stick

You are too easily discouraged.
I do not think your Michael Moore would give up on learning how to make direct democracy work, something you northerners have very little experience of, because he had to watch an ad or the crowd was not as big as he would wish.
Also you cannot wait for your corporate media to support you - they are never going to - and you cannot wait for a leader that your media likes. You have to learn how to make this work for yourselves.
It is very hard work and it takes a very long time. You have hardly begun yet you have begun.

Best of luck to you!