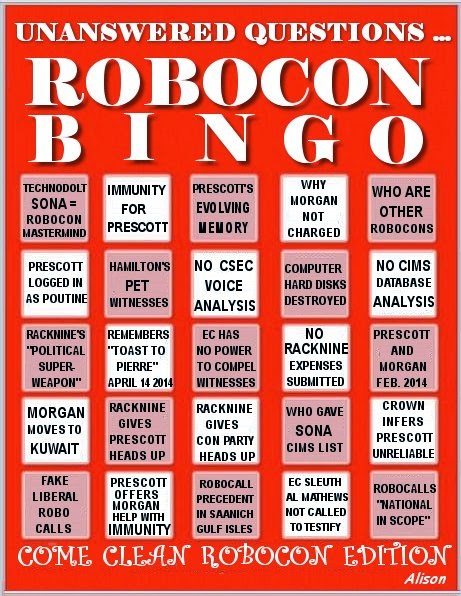 As lawyers in the RoboCon CREEP showtrial of Michael Sona wrapped up their final summations today - -with both sides agreeing more than one person was behind the Guelph robocall scam and that the testimony of the Crown's *star witness* Conservative Christian Andrew Prescott against his old friend Michael Sona should, according to the prosecution, likely be approached with caution” - - Prescott posted a "Bingo Card" of the type used as a campaign prop.

So here's mine in response ...

Your Bingo mileage may vary.

CBC - Robocalls: What we learned from Michael Sona's trial

.. wOw .. !! Brilliant @ Bingo ..
but for sure one could fill at least another card..
as its clear this case is a national disgrace

Where was that sterling Conservative, Ken Morgan
or Arthur Hamilton.. or the Con Candidate ??

Funny how so many of the key players
have an evangilical way of being..
including the witnesses like Hicks
Do ya think this might be true in most other ridings?
Like those other 246 ridings with vote suppression?

Why did Ken Morgan go to Kuwait?

That's an awesome clip, Anonymous. What the fuck do we learn indeed!

Hey Salamander, I left you a bit of robocon evangelism info in comments under previous post.