Ignoring the over 100 law profs that have just told him he's wrong, JustMin and AttGen Peter MacKay continues to insist that the Cons new anti-terrorism omnibus Bill C-51 is not going to be targetting birdwatchers, enviros, First Nations etc. because judges! warrants! independent judiciary!    About that ... 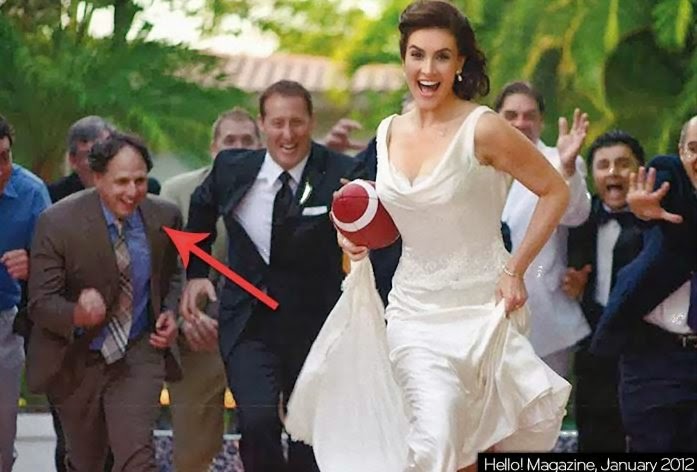 Press Progress recently asked why lawyers and party donors prominently featured in Justice Minister Peter MacKay's 2012 wedding photos wound up being appointed as judges.  MacKay's best man Josh Arnold, red-arrowed here, was appointed to the bench the year after this photo and his wife Cindy Cormier the year after that. Another appointment is a friend of MacKay's dad.

In fact six of the nine judges appointed to Nova Scotia courts since October 2013 have personal, professional or political connections to MacKay.

UPDATE #1: The CBC wrote a story about this PressProgress report and asked MacKay's office about the judicial appointments. A MacKay spokesperson said: "In the case of lawyers applying to be judges, committees assess them, provide comments, and also recommend them or not for appointment. The minister of justice only appoints those recommended by such committees."

UPDATE #2: Responding to questions about MacKay's judicial appointments ... Secretary to the Minister of Justice Bob Dechert rejected NDP Justice Critic François Boivin's characterization of the appointments as "patronage" that "undermines the credibility of justice," stating that these "eminently qualified individuals" were "vetted by the judicial advisory council" and that it's "upon their recommendations that all appointments are made."

MacKay himself has said it : "All appointments to the Federal judiciary are made on the recommendation of the 17 Judicial Advisory Committees across the country."

So backing up a step, who appoints the members of these 17 judicial advisory committees?
Turns out it's Peter Mackay!  As JustMin, he gets to pick over half of them on each committee.

Frank Mag had a bit of fun with a few of MacKay's committee picks last month: 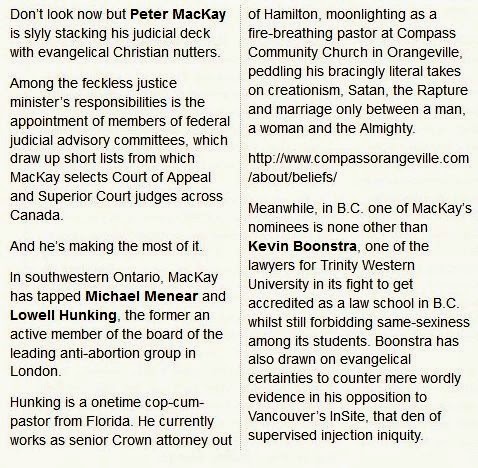 Ok, so who else has the Federal Justice Minister appointed? Here's six more:

And in a law article from last fall : How do we get more diversity on the bench when there’s no transparency in the appointments process? Stephen Lautens notes the Facebook page of one maritime appointments committee member shows the friend in her first slot is Peter MacKay’s mom, while another "regularly posts pro-Harper government/anti-Justin Trudeau tweets on his Twitter account".

This is not to suggest that the friends-of-Cons committee members won't do a fabulous job of carefully vetting MacKay's wedding guests before recommending them to the bench, or that once appointed, Peter MacKay's friends won't make wonderful judges just as annoying to the Cons as Steve's Supremes picks have turned out to be.

But it does suggest our Justice Minister is quietly building up his own personal patronage circle of Con-friendly "activist judges" - which doesn't do much to bolster his warrants! judges! independent judiciary! argument against possible Bill C-51 abuses.
.
h/t Antonia Z for Frank Mag link

I always wondered what kind of deal Peter and Steve cemented (when Peter betrayed his own party to Steve's) that would so durably grant his incompetence such immunity. It would be ironic if it was a signed agreement, but, on the other hand, without such a cheat-sheet, you'd have to wonder who's job it is to constantly have to spell things out for him.

If ever there was warranted a 'Most Unwarranted Bio-Pic Category' it would have to be awarded to something like "Oh That Peter!", or "Peter Just Being Peter".

I find it hard to believe Peter could manage all these appointments himself---he seems so care-free.

There's something querulous and mean-spirited about Pete, that's captured in the recording of his temper tantrum in the House of Commons when he throws down 40 reports about Missing and Murdered Indigenous women on the floor.

And then that wedding photo, evidence of his delusions, a grandiose Kennedy-dynasty-wannabe politician gesture, a trophy bride pursued by him and his pack of perps-to-be.

"...grandiose Kennedy-dynasty-wannabe" indeed! While there's undeniably a straight line between any two points swirling in Brownian Motion, it's the three-in-a-row that's convincing (see "trifecta" above). Still, any dynasty has to start somewhere, and I suppose father-to-son does, minimally, qualify. I wouldn't credit Peter authorship in his betrayal of the federal PCs; picking through the political dumpster (where both Mulroney's PCs and Day's Reform-a-CRAP Alliance awaited recycling) would not have seemed particularly appealing to one so dynastically deluded. No, it had to be Elmer at the fudge controls, baiting the demoralized Tory rump with his own affable, kinda dumb but wholesomely loyal and obedient son--- then came the switch to the sullen neo-right ideologue Harper whose "Honour's-For-Chumps" ethos those Tories would have found repellant.

The H-boy's prob'ly too busy fixing his fuck-ups and fucking-up his fixes to reflect on the ConKarm that flows from that seminal coup. It's no coincidence the two ministries awarded Elmer II were the seedbeds of the most noxious vines to have entangled Steve yet: the growing boondoggle in all things military, and the un-eradicated injustice of murdered and missing First Nations women. He seems to have been genuinely surprised at the spread of these weeds and their invasive cross-pollinations like veterans' affairs and Idle-No-More. Now he'll arrive tattered at the campaign proper looking like the hounds just chased him through the prickle patch--- whilst the baying gets louder and louder.

Don't happen much, but I'll bet this is one instance where Steve and I share sentiments: if indeed there is a MacKay dynasty, may it be circumstantial and short.

Elmer's dull-witted boy learned a trick or two at his father's knee.