Hey Electoral Reform Committee: It's our system, not Parliament's 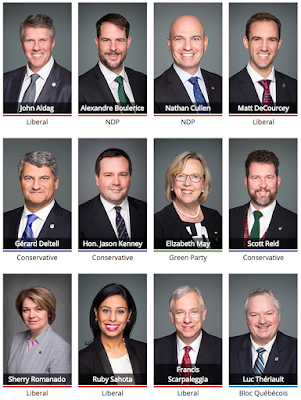 Sometime between the first televized ERRE committee meeting and the end of the second in camera meeting, Nathan Cullen's motion to have the committee set aside a timeslot for members of the public to ask questions of expert witnesses in real time via social media got axed.

As Cullen put it at the time of his motion in the first meeting : "This process is not ours - This entire conversation belongs to Canadians."

Cullen's motion, seconded by Elizabeth May, was received cautiously at first by the Lib MPs and then with growing enthusiasm to give it a chance.

Jason Kenney's response was to suggest that Cullen could just give up one of his own allotted speaking slots to questions from the public if he was all that keen on it.

A majority vote sent the motion off to subcommittee, from whence I noted at the time, it may or not return intact.

Kenney, who was also very keen on the Brexit referendum, was not on the in camera June 28 subcommittee or at the also in camera second meeting of the whole committee that followed it but something akin to his view appears to have prevailed nonetheless, and the original motion favoured by Cullen and May did not.


"The problem was to determine who would have chosen the issue, says Mr. Scarpaleggia. It's not fair to ask the researchers or clerks to select questions because, for them, it could remove their neutrality. And it becomes very difficult to manage. "

The amended motion [see below] allows you to tweet your questions to #ERREQ for members of the committee to decide at their discretion whether or not to pose any of them to the witnesses.

Big whoop. We can do that already.

David McLaughlin: It's our electoral system, not Parliament's
Anything less than a citizen-focused electoral reform consultation will cheat Canadians out of their rightful voice.


"During its first meeting, the ERRE Committee announced it had $300,000 to hold nationwide consultations and to complete its work. That same week, the National Energy Board announced $10 million for citizen consultation on the Energy East pipeline.

Such a contrast in priorities and effort is disturbing. The government and House of Commons need to reassess their thinking on electoral reform and engaging Canadians. A more citizen-focused electoral-reform consultation is required.

To do anything less will cheat Canadians out of their rightful voice. After all, it’s our electoral system not Parliament’s."

Mr McLaughlin, deputy minister of the New Brunswick Commission on Legislative Democracy 2003-05, now with Policy Options, has five good recommendations for the committee "to expand its process to fit its own expansive mandate."   Go.

CPC MP Scott Reid, who so far is speerheading the idea of an electoral reform referendum in committee, was adamant at the 1st meeting that Marc Mayrand not share a session with JP Kingsley because he intends to question Mayrand in depth on the time needed to set up a referendum.
Mayrand was already pretty clear about this at PROC last month :
Six months to set up a national referendum because the act has not been amended in 24 years. 10 months to redraw electoral boundaries, another 7 months to implement ... total of 24 months before the next election on October 17, 2019.

just have the ctte do an AMA on Reddit.com

The problem with social media is that it is tied to the real you... not everybody who would like to ask is going to be comfortable with that

lol If they don't think the committee clerks can handle the responsibility of choosing public questions off a twitter stream, I hardly think they'll be up to the idea of an AMA. Some individual committee members might though, later on. Re privacy ... you could email committee from a friend's computer. How controversial could a question be?