Steve and Kory and a box of hammers 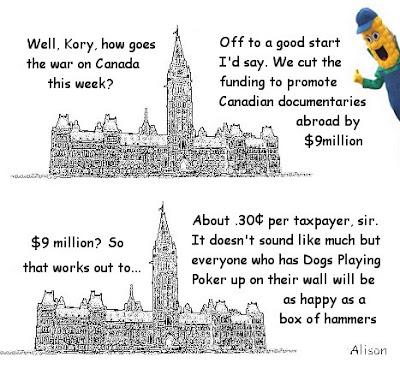 G&M : "Administered by the Department of Heritage, Trade Routes, valued at about $9-million annually, helps cultural groups such as Hot Docs and the Canadian Independent Record Production Association export and sell products abroad."
The Cons have axed it, thus saving every taxpayer less than .30¢!
Woo woo. The Con base must be just ecstatic.
Let's have a quick look at the comments under that G&M article to see how they're doing ....
Bluer than You from Canada : "Exactly, we need a majority to re-educate these sinners. Just wait until the CPC has a majority and then we'll see some real fundamental changes...."
Bluer than You from Canada again : "We are embarking upon a new age....
A new crusade led by great men like George Bush and Stephen Harper. They share the same values and ideas with the majority of Canadians."
Bluer than You from Canada again again ! : "It's about time! I urge all readers to save yourselves and follow the real Conservative values, learn what you must do and thank S.Harper.
I urge you to view our site which has the support of many CPC politicians including S.Harper.
Hopefully he will begin funding our efforts as promised by the CPC.
http://www.familyaction.org/index.htm "
Family Action Coalition ? Our site? Oh. Wow. I. mean. just. lol.
Note to Bluer than You : Actually, Harper is kinda trying to keep any association with anti-choice anti-gay religious nutbar groups on the qt, otherwise he'll never get a shot at that moral majority of yours. Just sayin'.
'Course maybe Blue is just a troll and foolin with us. Who else we got over there?
Green Konstantin from Canada : "When you lefty parasites scream and moan like this, it proves we're doing the right thing. Go soothe yourself with a nice round of gay sex with a piece of furniture or whatever you're into."
Tom Robinson from Not from muslim Toronto : "Real Canadians hate Toronto... How do you know that Native Canadians were not immmigrants at one time in this country. No-one knows for sure, so I could be right. How many muslims, asians, pakistanis, indians, or any other Torontonians serve in the military?"
Yup. There they are - Steve's box of hammers crowd.
Not exactly "happy as..." though, are they?
CBC quotes Bill Siksay, the NDP's culture and heritage critic :
"It really does seem to play to the most right-wing part of the Conservative Party."
and serves no other purpose, he did not add.
Posted by Alison at 7:09 am
Email ThisBlogThis!Share to TwitterShare to FacebookShare to Pinterest
Labels: arts funding, CFAC, Con fuckwittery, Kory Teneycke, moral majority, Stephen Harper, Steve and Kory, Trade Routes

Oh, give the hammers a chance, Alison.

They'll cheer way up once harperco gets a majority government. Then they can all come out of hiding and stevie will embrace them publicly . . . .

"No-one knows for sure, so I could be right."

I love it. A perfect capsule summary of the belief system of the Dough-Head Tendency (which encompasses so many others -- climate-change deniers, CBC-haters, you name it).

Ugh. How do people like that get through a day?

Why is the CBC comments section so polluted with that filth? Is the population really so fucked up that the proportion of people with internet access is representative of the population, ... or do right-wing fucks have more time on their hands?

If they're not representative, the CBC ought to moderate that section better, because a lunatic fringe is making us look bad.

If they are representative, ... we've got our work cut out for us.

I'm going to use my .30 cents to buy a styrofoam cup. Or part of one at least.

The story link, which I see I pooched anyway, was to the G&M, as are the linked comments, but the CBC commenters are no better.
It's the digital equivalent of call-in talk shows
Just checked back and there is someone making a serious attempt to explain colour field theory to them!

Great post, Alison--the cartoon really puts it into perspective. It's amazing what people think constitutes art these days, particularly the BoH crowd you have so deliciously (and infuriatingly) sampled here. There's a great article here:

about what these projects really fund, compared to how they are represented in the neo-con media. For a bunch of guys who are so keen on patriotism and nationalism (ick) they sure have no idea how such an identity comes together...