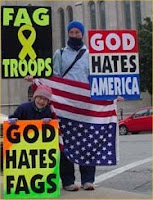 Fred Phelps' Westboro Baptist "Church" and godhatesfags.com has been around for 50 years and in that time has managed to attract a grand total of a few dozen members. This was mostly achieved just by breeding.
Although Stockwell Day took the practical step of alerting the border not to let them enter Canada to target the funeral of Greyhound Bus murder victim Tim McLean tomorrow, it appears a second attempt on the border was successful :

"Phelps-Roper said her group will not be stopped from getting its message out, even if only one member makes it to McLean's funeral.
"Don't worry. It won't matter how many people there are. When they get the signs up, they'll (get) the same raging, screaming response," Phelps-Roper said."

The Phelps family, you see, is only about the publicity.
They have nothing against McLean in particular, aside from their generic "God Hates Canadians" thing, but any funeral that attracts public attention attracts the Phelps clan.
In addition to 'fags', the Westboro Baptist Church is of the opinion that God hates Jews, Muslims, Catholics, Americans, Canadians, Chinese, Swedes, Mexicans, and the Brits.
God also apparently has a particular hate on for Fred Rogers, Jerry Falwell, Billy Graham, Coretta King, Elizabeth Taylor, Pope John Paul II, Ronald Reagan, Princess Diana, holocaust victims, the victims of the Sago Mining disaster and the recent Sichuan earthquake, the five girls killed in the Amish school shooting, the students gunned down at Virginia Tech, all US soldiers killed in Iraq, anyone killed in any natural disaster anywhere anytime, etc, etc, etc.
Bonkers. Mad as snakes. The Westboro Baptist Church is the equivalent of somone who places a burning paperbag of dogshit on someone's porch, rings the doorbell, and then stomps on it himself.
If the Phelps family hadn't been the beneficiaries of considerable media attention over the years because they style themselves as a "church", no one would be paying any attention to them at all.
Posted by Alison at 4:51 pm
Email ThisBlogThis!Share to TwitterShare to FacebookShare to Pinterest
Labels: godhatesfags.bonkers, Westboro Baptist Church

If everybody knew these lunatics were trying to get in and the border guards still let them pass, what does it say about our ability to keep people we don't want in Canada out?

Raph : What does it say about our ability?
See above.

I actually got a kick out of this story... well, the greater story after reading a couple of different articles.

My personal favourite was where one of the Winnipeg area MPs essentially putting out a warning to these folks regarding their personal safety and how it would be best protected if they just turned around and skulked home.

I personally want everyone to speak their minds, that way we know who they are.

Anon : Agreed. Absolutely. But not anonymously.