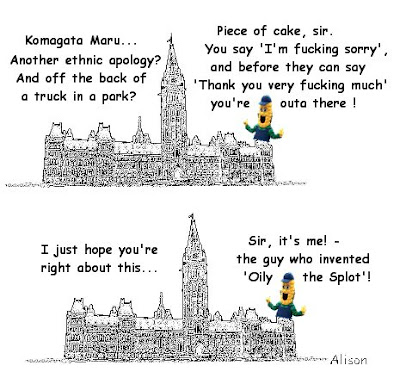 G&M : "As requested by the Prime Minister's Office, the organizers sent a draft of a gracious thank-you speech that they intended to deliver after Mr. Harper made his remarks. The Prime Minister's Office did content and grammatical edits of the speech and approved it for delivery."
Minister of Multiculturalism Jason Kenney : "We felt it would be most appropriate for this expression to be made in a venue where the broader community could participate, which is what the Prime Minster did," he said. "This was a way to maximize participation."

"Maximum participation" was somewhat compromised when Steve "left the stage immediately afterward, without waiting to see if his host would deliver the pre-arranged thank you speech."

It appears stevie may need some lessons in manners/protocol - unless he truly does want to be bush-lite.

This non-event was wrong in so many ways. Maybe it will come back to bite him in the ass . . . .

And the Steve and Kory series begins. Bravo!