Man of Steel vs Government of Silly Putty 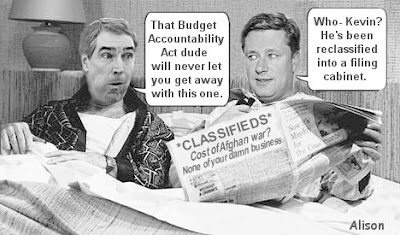 On Friday the government adjourned for three months because they have to get started on their barbie bunfests for next fall's election and hell there's not much going on in Canada right now anyway, right?
Today we learn :

"In a significant policy shift, the Canadian government now believes that telling the country's taxpayers the future cost of the war in Afghanistan would be a threat to national security.
... Julie Jansen, the director of the military's access branch, cited "the defence of Canada or any state allied" with it, in justifying the withholding of the figures for the three next fiscal years."

"The military's new secrecy comes after the financial cost of the mission became a major issue for several days during last fall's federal election campaign."

"Parliamentary Budget Officer Kevin Page released his accounting of the true costs of the Afghanistan War , which to nobody's surprise turned out to be somewhat higher than Stephen Harper's guestimate."

Page's first report, released during last fall's election, calculated that the cost of the Afghanistan mission not including military equipment will be about $18.1 billion by 2011.
The second, published shortly before Diamond Jim Flaherty vowed there was absolutely no chance of a deficit in 2009, projected a serious deficit for 2009.
Parliamentary Librarian William Young and House and Senate Speakers Peter Milliken and Noel Kinsella referred to these corrections of the government's mistakes as evidence that Page was "exceeding his mandate".
.
....Wait for it ... don't rush it ...
Parliament wants to gut first-ever Parliamentary Budget Office's independence, say observers

"The Joint Library of Parliament Committee's report will gut Canada's first-ever Parliamentary Budget Office of its transparency and independence and is a simple power play to keep Kevin Page in line because he embarrassed the federal Department of Finance, says Parliamentary observers and some MPs.

"What they've done is put Kevin Page in a box, haven't they?" Concordia University professor Jim McLean told The Hill Times last week.
"The whole idea of the Parliamentary budget officer was to have an arm's length assessment, to have a person and a group backing up that person of highly-qualified people who could make independent assessments and do it in a transparent fashion. Independence and transparency has been stripped out of this, all together."

McLean : "Twelve people in an office embarrassed the thousand thinkers in the Department of Finance and that's where the politics of the whole thing started to work against Kevin Page."

The muzzling of Kevin Page is a bipartisan effort with both Senate Speaker Noel Kinsella and House Speaker Peter Milliken wanting him reined in :

"The parliamentary library operates on a solicitor-client basis. This means any research the library collects for MPs and senators is "privileged" and can be withheld at their request. As an adjunct of the library, Mr. Page's reports would be done for MPs and committees who then can could use the information as they want."

Privileged. Withheld at their request. As they want.
.
Well it will make a nice change from all that transparency and accountability we've been dealing with lately.
McLean : "the office is going to be buried, very, very deep."
.
Time for Jennifer to fire up her forces again.
.
Posted by Alison at 1:08 pm
Email ThisBlogThis!Share to TwitterShare to FacebookShare to Pinterest
Labels: Accountability, Afghanistan, Budget Office, Kevin Page