A new info war - yeah, that's the ticket in Afghanistan 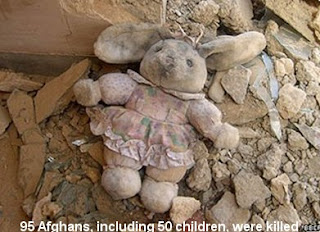 US plans push for 'information war' in Afghanistan

"The United States plans to devote more money and manpower to the "information war" in Afghanistan as NATO-led forces battle an aggressive media campaign by Taliban insurgents, officials said on Friday.

2,118 innocents died last year - an increase of 40%, according to the U.N. Mission in Afghanistan
"This makes the 2008 civilian death toll the highest of any year since… the fall of the Taliban regime at the end of 2001" : annual report for the United Nations High Commissioner for Human Rights.
"Air-strikes were responsible" for nearly two-thirds of those deaths, and "remain by far the most deadly tactic used by pro-Government forces."
.
US response? 45 new communications officers and "securing mobile phone towers" :
"US naval officer, Admiral Gregory Smith has been assigned to oversee stepped up communications efforts under the new commander of US and NATO forces in Afghanistan, Lieutenant General Stanley McChrystal.
The goal of such efforts was to promote a lively debate among Afghans and not to force feed American ideas, he told the Council on Foreign Relations.
Apart from carrying out more ambitious media campaigns, US military and intelligence agencies are reportedly working to jam Taliban radio broadcasts in Pakistan and Afghanistan ... "
.
UPDATE : Back here at home, The Star is running the tragic story of Warrant Officer Perreault, a Canadian vet of that war with PTSD :

"a new system of compensating injured soldiers means Perreault gets not a cent for having post-traumatic stress disorder. His numerous other injuries maxed out allowable payout, leaving several injuries uncompensated"

This shit makes me absolutely fucking livid. What a fucking disgrace.
Perrault has a supportive wife who understands why he blackens her eyes and strangles her in his sleep.
Maybe some of you "Support the War" folks out there would like to shift some of that "support" to the actual people we send to Afghanistan to prop up US imperialism and Steve's pretensions to a "role on the world stage".
Enough.... enough...
.
Posted by Alison at 8:27 am
Email ThisBlogThis!Share to TwitterShare to FacebookShare to Pinterest
Labels: Afghanistan, civilian deaths, NATO, PTSD

yeah. Unfortunately, these stories feed the displaced john wayne hero worship fantasising that some of the warporners thrive on.

I sincerely appreciate your lividness!

Well for chrissakes, we have a fucking contract with Canadian troops : they protect us and in return we don't ask them to do stupid shit, or illegal shit, and we provide whatever support they require on their return.
Thus far both sides of the contract in this little adventure are a complete cock up : they aren't protecting us, we're asking them to do stupid and illegal shit, and we're kicking at least some of them to the curb when their injuries are inconvenient.
If MacKay and the warporners can find $490 billion for defence spending, they can damn well cough up for treatment for Perrault and any other soldier who has "maxed out his allowable payment".