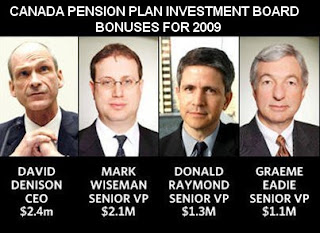 Two weeks ago The Star published this rogue's gallery of the Canada Pension Plan Investment Board and the extravagant bonuses they received despite having lost $24 billion in taxpayers' money.
Yesterday in the HoC : NDP Wayne Marston :
"...according to economist Toby Sanger, in the last 10 years, the CPP fund would have made $13 billion more than it did if it had been invested in government bonds, rather than in a diversified portfolio of equities, real estate and bonds.
In the fiscal year 2009, the losses in the fund wiped out four years of contributions..."
.
Four years of contributions...
Naturally the CPPIB defence team immediately rushed to its defence : 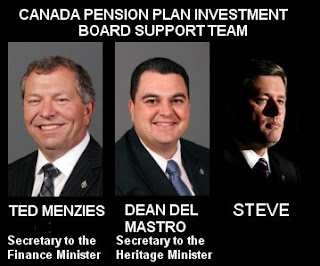 Ted Menzies, Con : "We do not want political interference in the remuneration of this board. They have done a very good job... We are absolutely on the right track"
.
Dean Del Mastro, Con : "The NDP has a history of advocating explicitly for political interference in the CPPIB. That is inappropriate.
I actually believe that the CPP Investment Board is very well managed"

Steve : "I actually noticed, by the way, that the board, in fact, did drop a total compensation for its executives by 31 per cent last year."

all praise the very bad idea!!!

That Dean Del Mastro has a history of being an idiot, doesn't he?

By "idiot", Thwap, do you mean toady blowhard used car salesman rousingly endorsed by LifeShite for being anti-choice and anti-SSM?

actually no, i meant standing up in the HoC making buffoonish speeches about how bad the Libs are, but that other info you've provided will do!