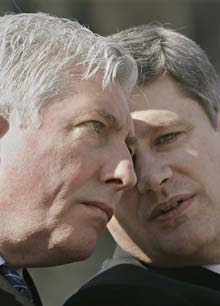 Fourteen years ago Stephen Harper co-authored a passionate plea for electoral reform and coalitions - including one with the Bloc. . . CBC's Terry Milewski has unearthed a position paper written by Stephen Harper and Tom Flanagan in 1997 on the necessity of forming a coalition of conservative parties in order to overcome the "benign dictatorship" of a century of predominantly Liberal governments. . . .

Well we know how that worked out for the PC Tories - a not very benign coup by the Reform Party. But what's interesting is their acknowledgement of the Bloc/ separatists/ Quebec nationalists as necessary partners in their gaining and maintaining power in the past :

ALONG THE TRANS-CANADA HIGHWAY FROM CALGARY TO BANFF lies a prominent mountain called The Three Sisters. Legend has it that an Indian chief placed each of his three daughters on a separate peak to keep them away from unworthy suitors. The strategy succeeded so well that the three daughters died up there. Canadian conservatism is also a family of three sisters fated to perish in isolation unless they descend from their mountain tops and embrace more realistic expectations.

After the next federal election, Canadian conservatives may begin to encourage limited cooperation between Reform and the PCs, leading to a system of sister parties.

Both the Reform party and the Bloc Quebecois, or even the PCs, could go on for decades without ever becoming national parties; and through their survival as regional parties they could prevent the emergence of a national conservative party.

The lack of any strategic alliance among the sister parties, argues Steve and Tom, leads to "a war of attrition" among them due to our first-past-the-post system.


In the longer term, however, and assuming that Quebec remains in Canada, the alliance would find it hard to form a stable government without some Quebec support. On that basis, a strategic alliance of Quebec nationalists with conservatives outside Quebec might become possible, and it might be enough to sustain a government.

None of this will be easy or even likely. But experience shows that a monolithic conservative party is unworkable; so conservatives who are unhappy with a one-party-plus system featuring the Liberals as the perpetual governing party may have little choice but to construct an alliance, at least of the two anglophone sisters, and perhaps ultimately including a third sister.

... Quebec nationalism, while not in itself a conservative movement, appeals to the kinds of voters who in other provinces support conservative parties. The Bloc Quebecois is strongest in rural Quebec, among voters who would not be out of place in Red Deer, except that they speak French rather than English.

It may be that the third sister can never be brought back in. In the last century, Quebec nationalists, content with provincial autonomy and cultural preservation, could participate in Sir John A. Macdonald's Liberal-Conservative Party -- a single party in name but a coalition in substance, always with a strong "Quebec lieutenant." But now that Quebec nationalists have discovered sovereignty, they may never again see merit in a conservative coalition."

How to fix this. What follows is a passionate plea for electoral reform and proportional representation like they have in Europe.


Our parliamentary government creates a concentrated power structure out of step with other aspects of society. For Canadian democracy to mature, Canadian citizens must face these facts, as citizens in other countries have, and update our political structures to reflect the diverse political aspirations of our diverse communities.

Only in politics do we still entrust power to a single faction expected to prevail every time over the opposition by sheer force of numbers. Even more anachronistically, we persist in structuring the governing team like a military regiment under a single commander with almost total power to appoint, discipline and expel subordinates.


Among major democracies, only Great Britain so ruthlessly concentrates power.

In most of the rest of Europe, proportional representation ensures that coalition governments routinely form cabinets. ... In New Zealand, which used to have a Canadian-style system of concentrated power, the voters rebelled against alternating Labour party and National party dictatorships: electoral reform now ensures coalition cabinets.

Modernizing Canadian politics would not only be good for conservatism, it might be the key to Canada's survival as a nation.

It's a fascinating read. And as a bonus - sure to outrage the Con cheerleaders who bought into Steve's current coalition monkey.
Yet I wonder if part of Harper's enraged obsession around "coalitions with separatists" is due to his feeling betrayed by the "third sister" he once envisioned as part of a conservative coalition. . . .

Many thanks to Kev in comments below for the Milewski link.
.
Posted by Alison at 2:51 am
Email ThisBlogThis!Share to TwitterShare to FacebookShare to Pinterest
Labels: Bloc, coalition, Election 2011, election reform, first-past-the post, Gilles Duceppe, separatists, Stephen Harper

It's great to see you back and blogging. I've got some catching up to do - this 1997 stuff is excellent.

At one time in this country we used to alternate PM's from english to french and back again.

This worked well due to large pockets of french settlement in southern and northern Ontario, Manitoba and the Maritimes.

Everybody knew they would get their turn.

As far as I know or can recall the Tory's have never had a french leader.

If the BQ changed it's name slightly and expanded it's physical horizons, they would have that outside of Quebec voter support.

Harper is not, never was and never will be comparable to any of his predecessors. He does not have the right stuff.

Many thanks to you, Kev and Terry Milewski for this exposé, Alison.

Imagine a Canada with a coalition government and Proportional Representation - What a concept . . . .

Bob : And apparently just what Steve wanted back when he was the one in a fragmented opposition.

Ron : I thought it was a very good article and surprisingly prescient in many ways. Many of us anglos are big fans of the Bloc - tough and smart and indispensable in parliamentary committees for their strong social justice leanings.

Alison, that's what is bothering me. This was hidden in plain sight, yet nobody bothered to look. Could it be that the LPC elite were more interested in destroying the man who wasn't supposed to be leader, Dion, and the media loving a good witch hunt and burning at the stake, piled on.

Koot! Sorry - you were stuck in spam moderation for some unknown bricklefritzing bloggery reason. Thanks for your good wishes.

Kev : Dunno. Don't know any more about the internal machinations of LPC factions than you do I imagine.
I think it likely that the Libs just tactically backed off the coalition when they realized it was going to be an impossible sell to a unprepared public who basically considered it to be 'cheating'. After Steve's little 2004 deal with Layton and Duceppe became public, people were confused by that but the Libs were just not able to reframe it in time, even as Rae was criss-crossing the country trying to sell the coalition idea.
So yes, I think Dion was scapegoated for it and yes, the media lurves them a good old auto-da-fe, but as to whether this was some sort of deliberate and premeditated LPC backroom power shift - I dunno.

Google shows this paper has been written about before now but wonky stuff like this doesn't generally have enough appeal to attract widespread attention anyway you know. Too complicated, too off-message, no evening news.

In my fantasy I see a scenario where Quebec leaves Canada and the Kootenays leaves BC and becomes a territory for the new nation of Quebec, kinda like the Bahamas and England or Puerto Rico and the US. Then Quebeckers could come to our place when they want to see mountains and we could go to Montreal (instead of Vancouver or Calgary, eeeek) when we want a shot of civilization.