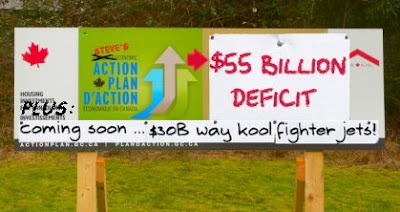 Much whining out there in the Con press about the cost of unnecessary elections. For the same cost as the entirely unnecessary G20 bunfest, we could have had three elections already, two of which would have already happened had Steve not shuttered Parliament to avoid answering to it.

Susan Delacourt : A Parliament of Shutdowns - a recap of the 40th Parliament, and

Ignore what Canadians politicians say about a coalition government
at the kids' table because grownups, "Canada’s leading thinkers on constitutional law and the formation of government", have begun "mapping out an instruction manual to guide the country when and if an election produces an unclear result". Including Tom Flanagan, you say?


"Other countries, such as Britain and New Zealand, have such manuals, and that’s largely why you didn’t see political hysteria in those nations when it came time to hammer out a government out of hung parliaments after their elections."

Well they better get a friggin move on then coz the Con-engineered booga booga coalition hysteria is already heating up.

Looking for something a little more grassroots to go with ?
DAMMIT JANET : Democracy's Future
.
Posted by Alison at 6:56 pm
Email ThisBlogThis!Share to TwitterShare to FacebookShare to Pinterest
Labels: coalition, Economic Action Plan, Election 2011

How can Canadians by and large be cheering on demands for democracy on the "Arab street" while re-electing a party found to be in CONTEMPT of Parliament? Hopefully more Canadians will put two and two together and realize that they have to put a stop to the erosion of our freedoms and democracy.

I'm beginning to wonder if our news media isn't angling more for a descent into madness kind of thing to cover rather than simply an election.

I really hope the murder of journalists that usually cover our politics wakes up their humanity a little more.

They're not geese after all. They're more like crows. Carrion crows at that.

We're to be the carrion.

Thanks, BY, well said.

Dana : a murder of crows, a parliament of crooks, an exhaltation of sharks

Yay! Alison is back and just in time.

Someone at Facebook is trying to counter the 'unwanted election' meme. Come to this event to show pols that yes, we DO want an election.

The Cons are plague rats, feasting on putrefaction.