OccupyVancouver told to get the hell off our lawn 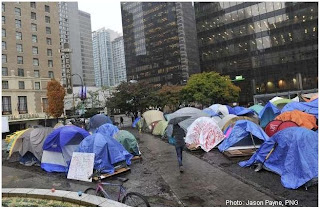 
"The weekend death of a female protester at the Occupy Vancouver site has done incalculable damage to a global protest campaign that suddenly finds itself at a crossroads.


Increasing problems at the sites are now overshadowing Occupy’s root cause and tarnishing the image of the entire movement. Its future gets cloudier by the day."

See, Gary would really like to support the movement but because 22 year old Ashlie Gough selfishly died at Occupy Vancouver instead of a few blocks away in the Downtown Eastside where these things go unreported, sadly he now finds himself irrevocably drawn into the get-the-hell-off-my-public-lawn media camp.

Gary declares that with the Vancouver election just 12 days away, this is "a referendum on Vancouver Mayor Gregor Robertson's leadership", a quote happily repeated by CKNW's Bill Good on his mayoralty  debate radio show between Robertson and NPA hopeful Susan Anton this morning.

Yup, Robertson better get cracking on evicting the homeless for safety reasons, even if they're safer here than anywhere else.

Robertson is indeed going for a fast-track court injunction to evict them tomorrow, backed up by the VPD:

"The Occupy Vancouver protest can continue. The tent encampment, as it stands now, cannot."

Luckily Kev at Trapped in a Whirlpool has provided this excellent rebuttal :


"Those who feel threatened by the Occupy movement think that by forcibly clearing out the encampments that they will cut the movement off at the knees, nothing could be further from reality. The camps will eventually end organically on their own, signalling the onset of the next phase of the movement towards social justice. But no matter how they end the movement has become unstoppable.

The Occupiers and their supporters have already succeeded in changing the conversation from one of tax cuts , deficits and the necessity of austerity to one of social and economic injustice. This is no small feat. Thanks to the Occupy Movement, Labour appears ready to end it's internecine wars and start to unite again in order to battle for the common good once more, again no small feat.

In other words this first phase of the movement has already been a huge success, violently suppressing this outpouring of dissatisfaction with the current sate of affairs will only prove to many that they Occupiers are right and can only as it has already done result in it's growth.
The battle for a better world has been joined and while it will likely be a long one, those who hanker for a more just society will never surrender."


A wonderful "Open Love Letter to #OccupyVancover" from My Little Soapbox.

Some sage advice from my friend Chris Corrigan on how the movement can continue : Revitalizing #OccupyVancouver

Montreal Simon : The Occupy Movement and the Marginalized

Dope City Free Press: Letter To the Mayor of Vancouver and a Letter Written the Next Morning To Occupy Vancouver's Organizing Committee

with an intro to Mr. Beer 'N Hockey above from RossK

CBC Poll: Do you agree with Vancouver's decision to clear the Occupy camp?
48%Yes 48%No
You have to go pretty far down the highest rated comments to find anyone who doesn't support them.

Here in Winnipeg, the Legislature is closing its doors to the Occupiers who had been using their washrooms and just going in to warm up.

I smell a rat! Have they all been talking to each other, deciding how they're going to stop this action?

"See, Gary would really like to support the movement but because 22 year old Ashlie Gough selfishly died at Occupy Vancouver instead of a few blocks away in the Downtown Eastside where these things go unreported"

and they don't tear down the DTES, even though many of the slumlord run SROs are also unsafe!

Bite your tongue, kootcoot!
Hey, you got through the bloggery spam filter w/o my intervention this time!

Regina and London have got their eviction notices too now I'm told, so yeah, it does seem like a concerted move.
One day reprieve in Vancouver while
OccVan gets a lawyer.