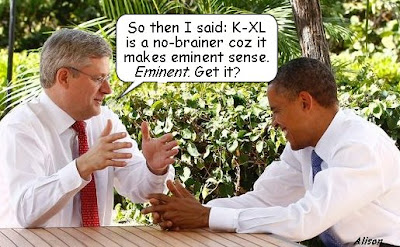 Actual Harper quote : "I remain optimistic that the project will eventually go ahead because it makes eminent sense."

I'm surprised that TransCanada's forays into eminent domain -  a corporations' state-sanctioned right to expropriate private property for the public good - and you're not fooling us with that jobs, jobs, jobs crap, btw - has not made more of a splash with the property rights crowd up here. It certainly was the key to opposition to the pipeline south of the border.

NYTimes, one month ago :

A Canadian company (sic) has been threatening to confiscate private land from South Dakota to the Gulf of Mexico, and is already suing many who have refused to allow the Keystone XL pipeline on their property even though the controversial project has yet to receive federal approval.

While it is impossible to say how many cases are working their way through the legal system, in addition to the 56 Texas and South Dakota cases, TransCanada acknowledges it has sent “Dear Owner” letters to dozens of families in Nebraska.

Here is one such letter, sent back in April to Nebraska landowner Randy Thompson from the TransCanada office in Houston, Texas.

A Nebraska lawmaker [State Sen. Bill Avery] is proposing criminal penalties for pipeline officials who pressure landowners with eminent domain before a pipeline gets the official green light.

Eminent domain refers to the power of governments to take private property for a public use with appropriate compensation. The power is granted to some private companies, such as utilities and railroads.
Current state law sets no limits on pipeline companies' use of eminent domain, said Norfolk attorney David Domina. That allowed TransCanada to send out two rounds of letters pressuring landowners to sign easements allowing the controversial Keystone XL pipeline across their land.
The letters said that if landowners did not sign within 30 days, the company would use eminent domain to get the right to cross their land.

On Monday, after being hit with a 2 year delay from the US State Dept, TransCanada announced it has reached an agreement with the Nebraska government to change the route of its proposed Keystone XL oil pipeline by 50 km in order to avoid the ecologically sensitive Sandhills region and the most vulnerable part of the Ogallala aquifer, taking one whole day to walk back from its previous claim that any change to the route would be an automatic deal-killer.

You don't hear much about the use of Canada's Expropriation Act. Last time I wrote about it was when the government of Saskatchewan expropriated a farmer's land last year for Loblaws.
.
Posted by Alison at 9:42 am
Email ThisBlogThis!Share to TwitterShare to FacebookShare to Pinterest
Labels: eminent domain, Keystone XL pipeline, separation of corporation and state, TransCanada

Curious that in the first paragraph of their letter to the land owner, TCP made a comment that appears to be constructed to deliberately mislead the reader.

They state that their pipeline would have the result of..."significantly improving U.S. energy security"...

If I were a landowner I think that comment would influence me to willingly participate in the project.

However as you clearly showed in the 'exporting energy security, xl pipeline exposed'article, there can be no doubt that the refineries in Texas have every intention of shipping the refined product, tax free, anywhere but back into the U.S.

This deliberate misleading of the land owners would be useful (in a legal sense) information for groups interested in stopping or altering the KXL, would it not?

Interesting point.
IANAL but ...
Challenges in Texas have used a variation on that argument as part of their brief concerning "bullying" of landowners but Nebraska lawyers seem to be concentrating on states' right to determine the actual route of a pipeline, not whether it should exist in the first place.

Your blog is very informative

And another cherished Reform principle shown to be the garbage that everyone suspected it was. Do the Con MPs from the 90s have anything left that they haven't sold for a few bucks? Did their supporters ever truly believe in those principles, or were they just fans of the loud & angry man shtick?

An extra 25 miles of pipe won't get the thing off the aquifer.

BCL : Not only will 25 miles of pipe not get it off the aquifer, it won't even get it off that part of the aquifer under Nebraska, where I understand the idea is to shift part of the route east to an already existing TransCanada pipeline and easement built across the state three years ago.

But, hey, it did do the trick of turning Nebraska Governor Dave Heineman's opposition into support:
"Our most important objective all along was to move the route. So if we can expedite the supplemental environmental impact assessment and get moving on the construction of the pipeline, we’re all for that."

So it's back to the local people and their fight against eminent domain, an ugly business that divides communities into the ones who take the dough vs the holdouts.

Sorry,Alison, I don't get it. Why is eminent domain important here?

Are you the same Anon as the first Anon? Great points btw.

Eminent domain matters because once TransCanada acquires property rights whether by easement or by confiscating private land, it legally owns interests in real estate, an unassailable right. That's why they have been pushing to secure them ahead of pipeline approval.

I've seen that map before. It looks like its touting the I-90 alternative. But that adds 70 miles of pipe, passes under rivers, involves using new tech to get under these rivers safely, and etc. It was already looked at by DOS and rejected.

Point is, if the current route is too worrisome enviromentally, all the other plausible routes have been considered and suck worse, shifting the environmental burden elsewhere. So this whole rerouting thing seems a mere PR initiative

I wonder if it's wise to push eminent domain letters from 'foreign' oil company on a bunch of likely heavily armed rural Nebraskans?

TransCan: "Sir, we're doing some follow-up to make sure you received and understand the letter we sent you a few weeks ago."

TransCan: "Well, do you have any concerns?"

In Canada we have the Endbridge pipeline and the dirty oil tankers from China, that is going to have civil disobedience. One First Nations person said. His grandmother is going to sit in her wheelchair, with her shotgun. And she doesn't miss.