Beyond the Border War on Drugs 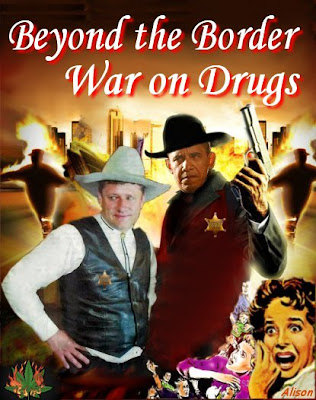 Seven months after Steve and Barry signed off on Beyond the Border last year, agreeing to improve cross-border investigations and share more info on Canadian travelers with Homeland Security, US AG Eric Holder explained to the Northern Border Summit that while Canada and the US already had an "excellent relationship" on  "cooperation in criminal investigations and prosecutions", " certain sentencing laws – and information sharing policies and practices – should be updated."


Uh-oh, I wrote at the time, here comes Operation Doobie - the source of Steve's hardon for "spending hundreds of millions of dollars of taxpayers dollars on prison building, in order to impose a mandatory minimum term of six months in jail for anyone who grows more than six pot plants" - and this in a country that overwhelmingly supports decriminalization if not outright legalization.


Well, it would appear Operation Doobie has now entered the building. 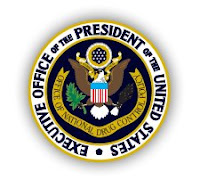 There are a number of curious things about the Whitehouse National Northern Border Counternarcotics Strategy, January 2012, which I'll get to in a minute, but basically it calls for more info sharing from ISPs :


"It is imperative that Canada and the United States work together to expedite the sharing of information from electronic communication service providers; and share information necessary to lay the foundation for intercepting internet and voice communications under their respective laws in a timely manner." (Pages 33-34)

Plus greater integration of Canada and US law enforcement agencies in Border Enforcement Security Task forces (BESTs) and the 15 Integrated Border Enforcement Teams (IBETs), including FBI, ICE, CBP, USCG, CBSA, RCMP, DEA, OPP, etc etc. Mention is made of the coordinating duties of the DEA and FBI offices located in Ottawa, Vancouver, and Toronto.

Naturally this is reported in the US media as being about keeping Canadian marijuana out of the US, however small potatoes we might be compared to the US Mexico border :

"Agents seized about 9,470 pounds of marijuana along the northern border in fiscal 2011, according to Customs and Border Protection statistics, less than 1 percent of the roughly 2.4 million pounds seized along the southwestern border."

Ok, now for those curious bits ...

It really is all about pot.

"Marijuana is the most widely abused illicit drug in the United States and Canada.

Marijuana and Ecstasy remain the most significant Canadian drug threats to the United States. While still responsible for significant social harm and public health and safety consequences at the individual and community levels, methamphetamine (meth) and heroin pose much lesser threats to each country, as evidenced by case reporting and limited northbound and southbound seizures."

See now I would have thought meth and smack were a greater threat than pot but apparently that's just me.

However if I was trying to justify expanding internet spying or spending billions to further integrate Canadian law enforcement under DEA and Homeland Security, then I guess I'd pick a viable target like potheads over the junkies in the DTES.

In the report, various Canadian ethnic groups are held responsible for grows and labs - Vietnamese, Italian, Irish, Indian, eastern European, plus the Hell's Angels and FN border reservations - but then the report elsewhere undercuts its own message by noting that the prevalence of reported drug use - cannabis, cocaine or crack, speed, Ecstasy, hallucinogens (excluding salvia) or heroin - is down slightly in the US and down a whopping 14.5% in Canada from 2004 to 2009.

Aside from its considerable preoccupation with pot, the report states that "Canadian-produced meth currently poses a limited threat to the United States" and "the vast majority of cocaine that crosses the U .S .–Canada border is northbound into Canada".
Plus ""Vietnamese Transnational Crime Organizations, in some cases with ties to Canada, have moved their indoor marijuana grow activities to the United States in an effort to decrease transportation costs and limit the risk of seizure associated with smuggling marijuana across the Northern border."

So ... drug use down, meth no biggie, cocaine flows north, and pot grows moving stateside.

So what, aside from the danger posed by people staring raptly at their hands while eating a shitload of cookie sandwiches, has any of this got to do with integrating the border again?

Back to the National Northern Border Counternarcotics Strategy :

"During the November 9-10, 2010 Cross Border Crime Forum Ministerial, the four co-chairs, the Attorneys General for the United States and Canada, the Minister for Public Safety and the Secretary of DHS ... officials underscored the importance of a shared vision for border security and highlighted progress made by the United States and Canada over the past year to safeguard the critical resources, infrastructure, and citizens of both nations, focusing on streamlining information sharing and enforcement efforts and enhancing the ability of both countries to identify and respond to a wide range of threats."

Safeguard the critical resources of both nations? Are we still talking about pot here?
.
Monday night update : Via Greenvie at Bread & Roses, a great piece comparing SOPA to the war on drugs :
Stonekettle Kitchen : SOPA, PIPA, Good Intentions and the Road to Hell
.
Posted by Alison at 6:25 pm
Email ThisBlogThis!Share to TwitterShare to FacebookShare to Pinterest
Labels: Beyond the Border, Canada-US border, DEA, deep integration, Homeland Security, internet spying, marijuana, pot, security perimeter, War on drugs

Thanks. Eddie Izzard has this great bit where he rewrites Brit movie titles and plots the better to appeal to US audiences - so A Room With a View becomes A Room With a View of Hell, Staircase of Satan, Pond of Death! Graphic done with that in mind.

Last month David Biette, director of the Canada Institute at the Woodrow Wilson Center, compared the Beyond the Border deal to its moribund predecessor, the SPP :
"The perimeter deal could avoid the same fate, but only if it continues to fly under the American public's radar."

"The perimeter deal could avoid the same fate, but only if it continues to fly under the American public's radar."

Perhaps it's time to light the passions of herb loving US libertarians who are supporting Ron Paul.

Alison, where did you get that SPP quote?

"David Biette, director of the Canada Institute at the Woodrow Wilson International Center for Scholars, said the SPP "was a tarnished brand, but the issues didn't go away."

He argued the perimeter deal could avoid the same fate, but only if there is political will on both sides and it continues to fly under the American public's radar. (A reporter's question to Mr. Obama on the Keystone XL pipeline during the perimeter announcement got more US press than the plan itself.)"