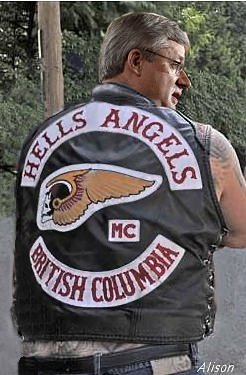 In 1973 the federal LeDain Commission called for the end of marijuana prohibition, and since then public opinion polls show a majority of Canadians of all ages and political stripes from right across the country agree.

How we doin' with that?

In 2010, nearly four decades later, the Royal Canadian Mounted Police handed Canadian pot activist Marc Emery over to the entirely discredited US War on Drugs machine to serve a five year prison sentence in Mississippi for selling seeds through the mail in Canada.

Steve's new Safe Streets and Communities Act- Bill C10, aka the Minimum Sense on Marijuana Bill, will introduce mandaTory sentences for possession :
In BC, where support for ending the doobie prohibition is currently running at 73%, the main beneficiary of the Cons Dumb-on-Crime Agenda is the Hell's Angels with their estimated $6-billion annual organized crime drug industry.
They must be thrilled that Steve is going to chill amateur grower competition for them, driving up prices and profits. They should look into making him an honorary member.
.
Posted by Alison at 6:02 am
Email ThisBlogThis!Share to TwitterShare to FacebookShare to Pinterest
Labels: Bill C-10, dumb-on-crime, Hells Angels, Marc Emery, marijuana, pot, RCMP, Stephen Harper, War on drugs

Given the infiltration of organized street criminals into the Canadian elite, I'm sure steve's colleagues have been giving him approving nods from across the floor of the club for a while now.

(I was going to say that they were patting him on the back, but I think even bikers who sexually enslave crack addicts don't want to be seen touching stephen harper.)

I think the biggest beneficiary is CCA, Corrections Corporation of America, who will operate the privately owned and run prisons. They're very good at making sure anyone who gets out of one of their warehouses will soon return. Paid per inmate, they naturally want long sentences and only pay lip service to rehabilitation.