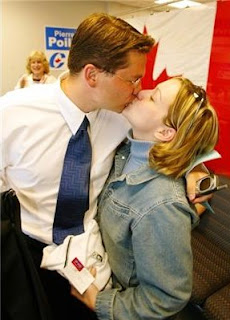 Nor did she speak to Nigel Wright or Senator Gerstein about it apparently.

That top party op is Pierre Poilievre's ex, Jenni Byrne - Conservative Party director of political operations, national Con campaign director during the 2011 election, and Steve's once and perhaps future director of issues management in the PMO.

But then when you read the article, it turns out to be the Con Party spokesy Fred DeLorey answering all the reporter's questions on Byrne's behalf by email. Nothing directly from Byrne and no follow-up questions.

Mr. DeLorey, you may recall, also initially denied that the Cons were behind the January robocall pushpoll in Saskatchewan regarding electoral riding redistricting, while Poilievre, who once founded a robocall company of his own, said they were done by Chase Research. Eventually Chase Research was outed for having done the calls on behalf of the Cons as an affiliate of RackNine, the company used by Pierre Poutine to make the election fraud robocalls in Guelph.

For her part, Jenni Byrne denied the Cons had anything to do with the Guelph robocall election fraud, issuing an email to say that the Cons ran "a clean and ethical campaign", notwithstanding they had to fire Patrick Muttart from their election war room after he sent Jenni Byrne's close friend SunNews CEO Kory Teneycke that bogus Iggy war photo.

But back to the article.
Commenters below it point out the obvious - the unlikelihood of the Con Party director of political operations knowing nothing about a PMO/Con Party plan to bribe a sitting senator causing them headaches for his silence.
Three comments are the angry rebuttals of one commenter, William Donaldson.
While he has every right to his defence of Ms Byrne, is this the same Bill Donaldson who was Pierre Poilievre's first campaign manager and Nepean-Carleton EDA president back in 2006 under Manager of Political Operations for Ontario, Jenni Byrne? [fourth link down marked DOC]

Although I've just taken a shower, I feel like another is in order after reading this and viewing the pic! (Actually, the pic alone was enough to generate feelings of disgust.)

Quite the incestuous operation the cons have goin' . . . .

Judging from what's going on in the by-election in London West, the Liberals provincially are doing the same thing.

Anon : You mean the misattributing of NDP candidate Peggy Sattler as the Green candidate in that byelection robocall poll?
Hard to see how that benefits anyone really given everything else ...
"Liberal candidate Ken Coran had ties to the NDP before he secured the Liberal nomination. A photo emerged of Progressive Conservative candidate Ali Chahbar at a Liberal event and former Conservative Al Gretzky is running for the Freedom Party."

Yeah, at first I thought it was Liberals stooping to corrupt & criminal Harper CPC Election Fraud methods too, until it came to light that PCG also works for the CONS.

Alison, I beg you, do not write anything like that again. You may turn me off sex for the rest of my life.