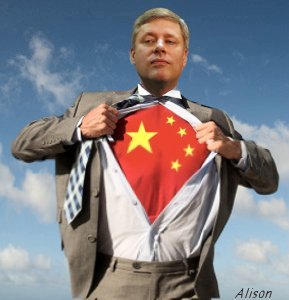 From Blacklocks, via The Jurist, a tale of taxpayer-funded government-facilitated corporate welfare off-shoring :

"Cabinet paid millions of dollars in grants to Canadian manufacturers to move production and jobs overseas in the name of foreign aid.

Newly-released accounts show the program paid cash grants totalling $3,852,927 to manufacturers to move production out of Canada, including $450,000 paid to one applicant that told Fantino’s department it had to “establish ourselves in Mexico so we can offer lower costs.” "


But most went to factories in China - automotive parts, rugs, fencing, furniture, plastics recycling .... over a two year period in 2006-7.

Because clearly China, the world's 2nd largest economy by GDP and we're #11, btw , is sorely in need of our "foreign aid" and "manufacturing jobs".

Ah well, that's because you guys rebranded it in 2010 as the Investment Cooperation Program  or CIDA-INC.  According to the DFAIT website :
But only Canadian firms with at least $2M in annual revenues were eligible for 50- 75% taxpayer coverage of up to $1M of their costs in assessing and moving a project abroad.

Happily touted as a Canadian success story as late as March 2012 by the previous International Cooperation Minister Bev Oda, CIDA-INC was the object of damning internal audits until it was finally shut down on May 18 2012 by Trade Minister Ed Fast in a statement citing "irregularities" and "taking immediate action to recover taxpayer funds that had supported these particular INC projects" and promising a "fundamental review of the program, expected later in 2012-13".

What about those intervening six years of sending Canadian manufacturing jobs to China and elsewhere - you know, the period from 2006-7 covered by Blacklocks and up to when you shut it down last year?


And does your newly branded "foreign aid" model of "doubling down on partnership with the business sector" and "vigorously promoting and defending Canadian interests and values abroad” benefit anyone here in Canada? Outside of those in the business sector looking for new avenues of taxpayer money to send Canadian manufacturing jobs overseas of course.

5 pm Update : I see SNC Lavalin had a multi-year contract with the Investment Cooperation Program, dated 2011-11-04.

It doesn't matter how many government sources you link to, Alison. People won't believe this till they read it in the Post or hear about it on CBC - which will be never.

Don't let Anony's practical cynicism get you down though. This was great work!

Thanks for those kind words, Saskboy.

Not sure if your comment is a lament or a snark, Anon, but I blog to point out things that I think have been misinterpreted, ignored, or overly pre-chewed by media, and people read blogs for the same reason.

I read blogs, this one especially, because the MSM is so out of touch.