Lockheed Martin : "We never forget who we're working for"

That famous LM motto ... which in the main of course refers to their $47.2 billion client, the US government.

Not just an arms manufacturer anymore, LM builds spy satellites for the NSA, plus surveillance and information processing for the CIA, the FBI, the IRS, the NSA, the Pentagon, the Postal Service, and the US Census Bureau.

Lockheed Martin - counting some people, blowing other people up.

Rather infamously up here in Canada, Lockheed Martin developed and supplied the data-analyzing software to Statistics Canada that scanned the 2006 census forms using “optic recognition” software and helped rework the program for the 2011 count - sparking fears that famous motto meant census info about Canadians would be funnelled to their biggest client via the Patriot Act. 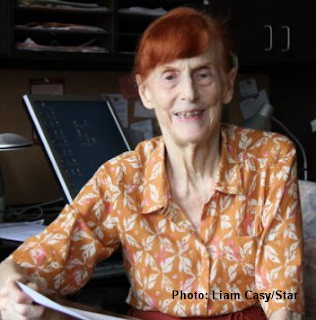 Today, 89-year-old WW2 war veteran and peace activist Audrey Tobias is in court for refusing to fill in her 2006 and 2011 census. If convicted, Tobias will refuse to accept a fine or community service on the grounds that either would be an admission of guilt. It's jail for her or nothing.
Her refusal is based on her dislike of LM and their cluster bombs :


“Giving it to a foreign military company sends a message to the Canadian people from our prime minister and cabinet that he supports military solutions. I didn’t like that,” she said.

She doesn't care about the possible invasion of her privacy by the NSA via Lockheed Martin but her lawyer will.


"Lockheed Martin is a leading provider of cyber security technology and services to the NSA and a number of defense and intelligence agencies."


"American officials are pressuring the federal government to supply them with more information on Canadians, says an influential analyst on Canada-U.S. relations."Not only about routine individuals, but also about people that you may be looking at for reasons, but there's no indictment and there's no charge," Christopher Sands of the Hudson Institute told a security intelligence conference."

Back in 2006, President of Lockheed Martin’s Americas Region and former Pentagon advisor to Dick Cheney, Ron Covais, was succinct on the subject of integrating corporations like his into the US and Canadian governments :


"We've decided not to recommend any things that would require legislative changes," says Covais. "Because we won't get anywhere."

A LM presser on its relationship to Canada refers to "the development of a North American defense industrial base" :


"Beyond our defence partnerships, Lockheed Martin Corporation stands ready to continue and grow our support to Canada's Census, health care management, information technology, as well as infrastructure and border security to ensure the safe, secure and efficient transit of people, goods and services between Canada and the US."

Health care management? Yeah, they do that too.

And didn't you guys just get hacked by China a couple of years ago?

In 2010, Tony Clement announced he would "introduce legislation this fall to remove threats of jail time for persons refusing to fill out the census and all mandatory surveys administered by the federal government." But then he didn't.

Fun juxtaposition  : The witness for the Crown against Tobias -Yves Beland, operations director at Statistics Canada - says he has never heard of Edward Snowden and testified that all Canadian census data is completely safe from Lockheed Martin.
.
Wed. Oct 9 Update : Tobias acquitted!


"The judge also described the Justice Department's decision to prosecute Tobias, a Second World War veteran, as a "PR disaster."

Having built the original census software, LM is now the only one authorized to update it.

“There is no such thing as a secure network,” said Christian Leuprecht, a professor at Queen’s University and the Royal Military College of Canada. “But you are taking a far greater security risk with your phone than you are with Lockheed Martin or StatsCan.”
Rosenthal said Lockheed Martin could, in theory, build a backdoor and access the census data. Under the U.S. Patriot Act, the Federal Bureau of Investigation can demand American companies hand over their data, regardless of where it comes from.
But even in the age of NSA snooping on companies like Google and Microsoft, there is simply too much at stake for both Lockheed and the Canadian government.
“For one, if the census data were ever hacked, no one would ever fill out a census again,” Leuprecht said.

Sure. If we knew found out about it. What are the chances StatsCan would hold a presser about it?

The surveillance state marches on with the sheeple in the way about to be trampled.

So Yves Beland doesn't know who Snowden is? Does he know who Harper is, does he remember Harper saying jail time and/or fines are inappropriate and his gov't won't do that? http://www.dailymotion.com/video/xfrizx_census-jail-threats-not-appropriate-harper_news

Harper got into office the year LM's optic software was first used and he got a majority the year they overhauled it.

Anon, if it were a secret backdoor, Statscan mightn't know about it and the exploit could be very hard to locate in the software code. See, Statscan Census workers told concerned Canadians that it was only sworn Statscan employees that would look at their data. There are laws governing this under the Statistics Act. However, I think it is crucial, given Snowden, to ask whether that guarantee is still valid. I think the answer is "we don't know" which is the same as "no". A responsible gov't would immediately tear up the contract with LM. Sadly, ours is canoodling them.