According to Duffy, the PMO blackmailed him into taking a bribe to save his own skin and that of the Cons from the wrath of their base. 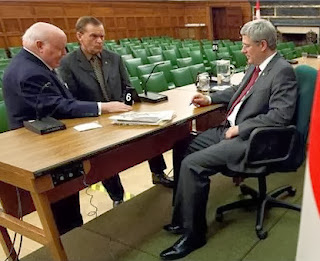 It seems no amount of $90K carrots or Senate expulsion sticks were spared to shut down that Duffy Deloitte senate audit. Where was it going that was ultimately worth the risk of what's coming out now- the PMO conferring an illegal under-the-table bribe on a sitting senator and then trying to cover it up?

When CBC applied for access to docs and emails re the Wright/Duffy payoff, there were apparently none to be had. None. Yet Duffy seems to have his end of that same correspondence. If those emails had in any way corroborated Steve's story that he had nothing to do with Wright writing Duffy a cheque, do you think for one moment they wouldn't have been pasted up at Sun News already?

On Tuesday Duffy's lawyer waved around a few of the "mountain" of those supposedly non-existant emails and read out excerpts, calling them "the tip of the iceberg" . He claimed the emails were "germaine" to Steve's involvement but would not release them, saying they would come out in the event Duffy was hauled into court. Was that a threat?

Because when Duffy told his side of the story yesterday, it stopped just shy of definitively placing Steve in the cheque-writing loop. Was there a quiet conversation after Duffy's lawyer's statement but before Duffy's that resulted in Duffy holding back on what his lawyer alluded to the day before?

Steve looked pretty confident in QP yesterday, restricting his answers to twenty Duffy questions by extolling his own personal ethical rectitude for dumping Duffy.
Duffy had said the day before that Steve's senior aide Ray Novak and Senator LeBreton called him in May and ordered him to resign.  Mulcair questioned Novak's involvement and Steve denied it, based on Wright not having named Novak as one of the 3 PMO staffers who knew about the cheque.  But unfortunately for Steve, Pamela Wallin had elected to wait till after QP to give her statement in the Senate in which she too said Novak and LeBreton called her in May demanding she resign.
Will Steve's recently promoted personal friend Novak be next to go under the Con bus?

And lastly, remember for a few days after May 14 when the Con story was that Nigel Wright was just helping out his dear 'friend' Duffy and selflessly taking a personal financial hit for the benefit of Canadian taxpayers?  Then Nigel Wright resigned, saying Duffy was not his friend and exonerating Steve of any knowledge of the $90,000 cheque on his way out the door. Mr. Wright, who will presumably be returning to the fold at Onex after his investigation by the RCMP, pretty much owns Steve now, doesn't he?
.
Posted by Alison at 5:49 am
Email ThisBlogThis!Share to TwitterShare to FacebookShare to Pinterest
Labels: Duffy, Pamela Wallin, PMO, Ray Novak, Senate, Stephen Harper

Do you follow Tracey Kent on twitter? Former Conservative, left because of corruption, lives in Vaughn Riding, I believe.

She points out that Duffy, Wallin (and maybe other senators?) were campaigning during election but their expenses may not have been reported in the proper place. For example Duffy was in Fantino's riding of Vaughan, but those expenses were not shown:

It seems to me that this may all tie into illegal election over-spending by the Conservatives, yet again.

Oh, and she tweeted an article about that townhall that Duffy hosted:

Who is the third guy in the picture and when was it taken?

Holly : It seems to me that this may all tie into illegal election over-spending by the Conservatives, yet again

I'm a sometime twitter lurker and yes I did follow Tracey Kent and Lorello's history with the Vaughan riding assoc.

More on Duffy claiming senate expenses while campaigning for the Cons

The Bay Street "Wonder Boy" Nigel Wright DOES NOT GIVE AWAY HIS OWN MONEY! Not a single dime came out of Wright's pocket!

It would be a simple matter of Nigel Wright INVOICING the “Conservative Fund of Canada” account (the Conservative Party’s --> taxpayer-subsidized war chest <----) multiple times for some phoney "Financial Consultant Fees" to accrue back the $90K. CPC treates that Fund's coffer as their private "Honey Pot."

Are there any conversations between Conservative Senator Irving Gerstein (Harper’s bagman) and the PMO about Nigel getting paid back from the “Conservative Fund of Canada” — the federal party’s war chest Gerstein once chaired.

Meanwhile, a possible new perp to join the parade? Hat tip to Stephen Lautens who tweeted this link:

Holly : It's an extraordinary piece of research, a lot of hard work, but I'm not sure I understand. Isn't this exactly why politicians declare their blind trusts to the Ethics Comm and get them cleared as Leitch has? I get why the blind trust/conflict of interest thing is dodgy - it's why the UK banned them for polis - but here in Canada they all have 'em : Baird, Flaherty, PVL, Poilievre, Toews, Dechert, Goodyear etc. What's different about Leitch's? What aren't I getting?

I guess the basic argument is that she was a paid trustee at Dundee REIT but did not ever declare her income from them; and that she was in potential conflict of interest because of her position in government while also a trustee there.

So she didn't get that particular thing cleared?

Alison, I tried to figure out a way to add you to my reading list here at Blogger but I'm not seeing any way to do it.

jannx : Feedly ?
Sorry, I have an old template and have been unable to update it to new feedburner. Atom and RRS says it works but it doesn't.

Holly : We don't know if it was cleared; we just know it isn't on the public page. I figured the subsequent payouts from Dundee RAIT went into the two blind trusts because they were negotiated a year before she was elected. But I dunno. Definitely agree it should be looked at - just don't know enough to judge it .... yet.

I'll give it a look. I've got RSS, and Atom now plus a feed from my iTunes plus other social media and I'm beginning to feel like I'm afloat on an ocean of info/opinion.

FWIW I got here thru Nadine Lumley who I also follow thru FB... I think I'm caught in a "Gordian Knot" of interwebs
(joke)