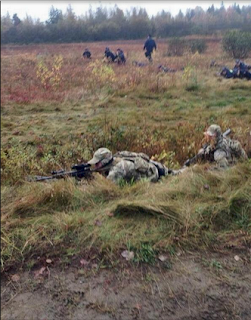 Sending in snipers in camo with dogs to crawl through the grass towards a group of unarmed people blockading a road because they fear the wholly-owned Canadian subsidiary of a Houston, Texas exploration company is setting up to frack their land.

Oddly enough, Canadian law supports the rights of the foreign company to frack over those of the people attempting to protect their community from it.

Hence the blockade protest, ongoing since Sept 30 when Elsipogtog First Nation Chief Aaron Sock issued the company an eviction notice not recognized by our courts and government. Yesterday, three days after the UN Special Rapporteur on the rights of indigenous peoples called conditions facing First Nations in Canada "a crisis" and the same day our PM also left the country, hundreds of RCMP moved in to enforce the rights of the fracking company.    40 people including the chief were arrested for refusing to abide by the court injunction to leave and the media was presumably pleased with their pictures of burning cop cars after the situation blew up.

In France, fracking has been banned since 2011 - despite legal challenges from corps - due to its potential for contamination of groundwater and causing earthquakes.
In BC, 85% of our 8,000 natural gas wells are fracked with another 40,000 on the way.

Another Excessive Response Team story from rural BC.

Here's a guy from the RCMP Emergency Response Team with his M-16 exactly as he looked when he and three others set out to arrest war veteran and PTSD sufferer Greg Matters for assault in Sept 2012 after Matters and his brother got into a family fight the day before.

Matters was unarmed and surrendering to them when he was spooked by the ERT helicopter sent in from Kamloops full of more officers circling closely overhead and tried to run away. When a faulty taser failed to work on him, he was shot twice in the back with an M-16 and died.

The Independent Investigations Office which had cleared the officers of "having committed a criminal offence" in April stated Matters was shot "in the chest" but last week a forensic pathologist testified at the coroners inquest he was "shot twice in the back". He either was or was not wielding a hatchet at them according to officers' testimony. 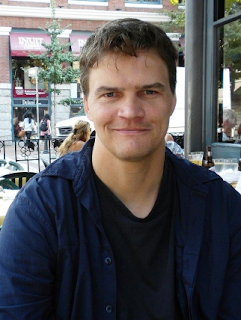 The ECT also assaulted and arrested Matters' mother and had no warrant so the BC Civil Liberties Assoc. has lodged a complaint with the Commission for Public Complaints against the RCMP.

How did anyone with an ounce of sense think a stressed out guy the police knew had PTSD from having been physically attacked by superiors in Bosnia would react to four guys dressed like this showing up on his property accompanied by a helicopter?

The Elsipogtog First Nation are in negotiations with the fracking company and local government officials; Greg Matters had a number of people he trusted to bring him in for questioning over what was a family dispute .
Yet somehow they both wound up dealing with RCMP escalating excessive response teams advancing on them through the grass with sniper rifles.

The RCMP has certainly gone in a different direction than back in the Dudley Do-Right of the Mounties days.

Further evidence of the "militarization" of policing, Allison. Post 9/11 BS that only engenders greater response from victims/demonstrators. Your PTSD soldier example is poignant but also a fine example of an incompetent response.

How did the mere allegation from his brother that Greg Matters ran him off the road wind up with Cpl. Colin Warwick shooting him twice in the back?

Anon : Good question and I think Michael Taylor has already answered it.
The specifics of it however are that ERT didn't have a Feeney warrant allowing them to enter the building so they were desperate to lure him outside for their arrest. Once outside, Matters discovered they'd broken the locks on his gates and any hope of his trusting them was dashed. He started to retreat back inside so they rushed him, and when the taser failed, Warwick shot him.


Miles Howe's link in the post perhaps sheds some light on those burning cop cars at the Elsipogtog fracking protest :

"... three so-called warriors with a journalist in tow – who claim to have arrived two nights ago from Manitoba – appeared to have determined that the situation was too extreme for them. Two of them have since been identified as Harrisen Freison and 'Eagle Claw'. They promptly ran down the road towards the far end of the police blockade. Until last night no one had ever seen these individuals before."

But you can read about these two online.

I've been puzzling out the same questions. My short hypothesis? The RCMP and police in general have become so insular and focussed purely on the tactical level that they've lost the ability to appreciate context. If you look at this stuff, from the G20 kettling and mass arrests, bait cars, agents provocateur, to the employment of heavily armed tactical units in minor actions, it is all about being clever and showy. ALways a 'can we do this?' never a 'should we do this?' which is quite alarming because it says they've lobotomised themselves and become so utterly divorced from teh social context.

Given the amount of open fire power and aimed(!) weapons at Elsipogtog, I think we narrowly avoided a massacre. The fact the governent is shifting us to be Saudi Nord, means that Native and non-Native communities alike will squaring off against pipelines, wells, and court orders.

The material from the Matters inquest is even more disturbing. The RCMP had the psychiatrist treating Mr Matters on the telephone during the "standoff" and refused to let him talk to him (Manners) even though he felt confident he could help defuse the situation. They RCMP also not only refused to let Mr.Matters mother help, but arrested her with force and removed her from the scene. Each step an escalation, leading eventually to Mr Manners being shot in the back.

"Harrisen Freison and 'Eagle Claw'. They promptly ran down the road towards the far end of the police blockade. Until last night no one had ever seen these individuals before."

Is that the Dana we know and love from Blog-a-Palooza Dayze?!?