I think Calandra read off his bit of paper from Steve rather well today, don't you?
Love the bit about how :

...  by cleverly reading Greenwald's byline alongside those of Greg Weston and Ryan Gallagher at the top of the CBC article.

A byline that has also graced the pages of The Guardian and the New York Times, where, presumably, Greenwald also got paid as a journalist.

And I'm sure the actual subject matter of the CBC article :

An NSA briefing note describes the American agency's operational plans at the Toronto summit meeting and notes they were "closely co-ordinated with the Canadian partner." 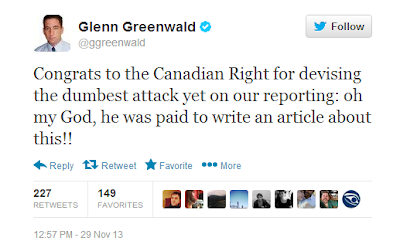 Mr. Speaker, the CBC’s Journalistic Standards and Practices make clear that and I quote :

To ensure we maintain our independence, we do not pay for information from a source in a story.

CBC only admitted to their cash for news scheme after The Wall Street Journal forced it out of them. CBC is trying to justify the violation of their own ethical standards by claiming that Greenwald is a *freelancer*.

Mr. Speaker Greenwald has strong and controversial opinions about national security and of course, that's his right, but when CBC pays for news, we have to ask why furthering Glenn Greenwald’s agenda and lining his Brazilian bank account more important than maintaining the public broadcaster’s journalistic integrity?

Would CBC please pay Mr. Calandra a $1,500 freelance fee to obtain a signed affidavit from Mr. Harper detailing his discussions with Mr. Wright?

.. without having viewed the clip from Question Period, I don't know if the Elected MP base stood, clapped rapturously, shook their fists angrily or nodded their heads in grim satisfaction after Calandra finished reading such a lucicrous prepared response. Thus wacko club just compounds the visibility of their ignorance.

I read Greenwald's articles re the related Snowden documents and realized yet another disgusting milestone was being attained by Stephen Harper, unelected stooges, shallow MP's of dubious courage or honor, simplistic and hoodwinked donors and mouthpiece media crud.

Aiders and Abettors .. That's the goal line for this distorted political machine and the equally disturbed political party and cling ons. They are fatally bent, have been captured by corporations and foreign interest and believe whatever smug entitled dogma is emitted from the prime minister's office.

Paul Calandra is a one man vote suppression machine as people become too embarrassed and disgusted to look at our parliament.

Harper appointed this clown as his parlsec for the same reason Nero appointed his horse to the Roman Senate - to show his complete disdain for our way of government.

Shit, Caligula, I meant Caligula appointed his horse to mock the senate.

Jaysus, and here I thought Rob Anders was the bottom of the barrel.

Harper's choice of Calandra follows a long list of rude, deceitful and obnoxious Conservative Government representatives. Baird, Poilieve, del Mastro and others are and were pathetic responders to the opposition questions. Calandra has degraded Question Period to an even lower level of debate.

UnF'ing believable that our parliament has degraded to such low levels. As Montreal Simon points out how can the opposition function when shit spews forth from the parliamentary secretaries mouth when asked a perfectly normal question?

In response to an NDP question about Nigel Wright:

"I do like flowers and, of course, with lemons I like to make lemonade. My two daughters, this summer, actually had a lemonade stand where they sold lemonade for 5¢ on the street. They did very well. I am very proud of them."

In response to a Liberal question about the Wright-Duffy deal:

"She is sitting in a caucus where, I do not know, three-quarters of them have been convicted of some type of fraud, whether it is the Elections Canada Act or robocalls. The real fraud squad is sitting in the Liberal Party."

Which as you can see, makes the job of the opposition almost impossible. For what good is asking questions when you are going to get those kind of answers? - Montreal Simon at:

Mogs, the Cons were always completely crap in QP - always - so running out the clock was their best shot at beating it. Now with scandal nipping at their heels, they're just blowing it up like angry children who've been caught out so no one else can use it either. Calandra just a joke now. Speaker Scheer not entirely up to his role as the supervising adult here, is he?

Salamander : The QP shot was close in so you couldn't tell much about attending MPs.
Breitkreuz behind and Lukiwski beside tut-tutted and desk-pounded on cue though.