Stephen Harper and his "rogue representatives" 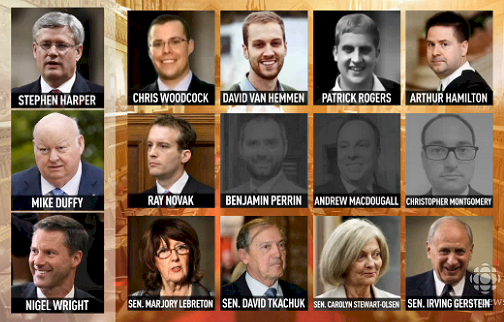 
"Prime Minister Stephen Harper has told a court that an alleged offer to the late MP Chuck Cadman of a $1-million life insurance policy in exchange for his vote in the Commons in 2005 is “preposterous” and that only “rogue representatives” of the Conservative party could have done such a thing.

Harper says he authorized party officials Doug Finley and Tom Flanagan to meet with Cadman May 19 to assure him that if he rejoined the Conservative caucus he would automatically secure the party nomination in his B.C. riding and get all the party help he needed to campaign.

Harper said that when Dona Cadman first asked him in September 2005 if he knew anything about Conservative representatives offering her husband a $1-million life insurance policy, he did not know her husband had told her about it and did not ask where she heard that."


"Prime Minister Stephen Harper has testified that he personally authorized an offer made to late MP Chuck Cadman in 2005 in exchange for his help defeating the Liberal government. But he maintained he knew nothing about an alleged offer of a $1 million life insurance policy to get Cadman's vote, saying he only approved an offer of campaign financial support in the event of an election."


Zytaruk: "I mean, there was an insurance policy for a million dollars. Do you know anything about that?"

Harper: "I don't know the details. I know that there were discussions, uh, this is not for publication?"

Harper: "Um, I don't know the details. I can tell you that I had told the individuals, I mean, they wanted to do it. But I told them they were wasting their time....But they were just, they were convinced there was, there were financial issues.

Zytaruk then asks how official these 'individuals' are.

Harper: "No, no, they were legitimately representing the party. I said don't press him. I mean, you have this theory that it's, you know, financial insecurity and, you know, just, you know, if that's what you're saying, make that case but don't press it...."

"After my meeting with Mr. Harper concluded, Mr. Tom Zytaruk interviewed Mr. Harper for approximately 10 minutes in my driveway. When that interview concluded Mr. Zytaruk came into my house and I told him that Mr. Harper told me that he had no knowledge about a $1 million insurance policy offer made to my husband by Conservative Party representatives."

Mike Duffy tries unsuccessfully to tone the story down ...

Steve Vai on Mike Duffy's take on his interview with Chuck Cadman via Galloping Beaver :


"Duffy was trying to tone down the story, offering up a conversation he had with Cadman, wherein he said he didn't want to vote against the budget, for fear he would lose his seat in an election and the insurance he had as an MP because of it. Duffy said Cadman was concerned that he would die and his wife would suffer. What nobody has picked up, Duffy actually connects some dots here. If Cadman was concerned about his insurance as an MP, then what better way to allay his fears in voting with the Cons, than to offer him assurance on that score. Insurance was on Cadman's mind, according to Duffy, which puts the offer into complete context."

Update : Which brings us up to today ... and the RCMP's charges of "criminal conspiracy" within the PMO of breech of trust, fraud and bribery
PM didn't know staff asked Conservative Party to pay Duffy's expenses: spokesperson


"Harper’s director of communications, Jason MacDonald, says Harper had no idea his staff had asked the Conservative Party to pay Sen. Mike Duffy’s ineligible expenses, ... and didn’t know PMO staff wanted a Senate report into Duffy’s expenses sanitized, or that the party’s chief fundraiser tried to influence the independent audit of Duffy’s claims."

Just another case of "rogue representatives" in the PMO again.

Funny the same names keep cropping up, huh? Agree that whatever it is Duffy has over Harper, it goes back to Cadman.

So tonight I'm reading through all the affidavits and transcripts from Harper's 2008 libel case against the Libs, which he subsequently dropped, for their airing of quotes from the Zytaruk tape on the alleged $1M bribe.
I'd forgotten how heavily Harper leaned on Duffy's contention - that because Cadman never personally told Duffy about the bribe then there must have not been one - as proof of Harper's innocence.
Pretty much the same way he's leaning on the RCMP ITO now.

Here's that 2005 Duffy clip with Cadman:

Duffy : Chuck, earlier tonight Craig Oliver reported on our network special that the Conservatives were prepared to offer you an unopposed nomination if you would vote with them and also help with campaign funding and so on. Was that offer actually made?

Cadman : Well, there was some talk about that. As far as the nomination, you know, discussions did come up, the talk did come up, yeah.

Duffy : So they were making an offer to you and in the end you refused?

Cadman : Yeah, that was the only offer I had from anybody. So there was no offers on the table up to that point about anything from any party. [end of clip]

Duffy peddled this at the time as Cadman having said "no offers", ie no bribe. Harper repeated this interpretation at every opportunity.

Oh Anonymous 4:59pm -- I hadn't thought that but there it might be…
Why did Harper and the PMO put so much effort into helping Duffy?
Duffy bragged about knowing where the skeletons are…this could be one nasty skeleton.

going from memory... a quicky search isn't finding any support...

Wasn't there a tape that ended up in an investigation? My memory is that there was a conversation with Cadman's wife about some sort of deal and that conversation was recorded. The issue then became whether or not the recording had been altered before being given to the investigators.

Is this rememory right?

Anon@5:16 : In 2005 Cadman biographer Tom Zytaruk interviewed then Opposition leader Stephen Harper on tape about the alleged million dollar bribe to independent MP Cadman two months before his death from cancer to vote against the Libs and bring down the government. See Zytaruk tape transcript above.
Zytaruk got this info from Cadman's wife - see her affidavit above.
In 2008 when Zytaruk's book was going to press, the Liberals went very public with the tape transcript. Harper tried to libel chill the Libs by suing them for defamation for $3.5 million. The Cons alleged that the tape was doctored but a court-ordered FBI tape analyst chosen by Harper denied that claim: "contains neither physical nor electronic splices, edits or alterations."

Harper tried and failed to keep the FBI guy's report out of the press until after the 2008 election.

In 2008 the RCMP declined to bring bribery charges against the Cons and in Feb 2009 Harper dropped his libel suit against the Libs.

The opposition and especially Thomas Mulclair should be pushed hard to bring the following up in the house during question period.

I would humbly suggest that Harper be asked in the House if he is lying to the Canadian people about his part in the Senate scandal. He should be asked in every question period as many times as possible if he is lying, has lied or is lying for other people. He can deny lying but the seed of his deceit will be sowed in the minds of the Canadian people, millions of which are watching question period every day.

Of note is the complete destruction of the not so soon past Liberal leader Michael Grant Ignatieff, who in his flawed wisdom, decided not to go with the coalition NDP and the Bloc Québécois to put the rabid Harper beast down before he could do any more damage to Canada.

Now is the time to put this shameful,foul,evil creature away
CGHZD

CGHZD : Mulcair is doing a brilliant job of exactly that and has been since the beginning of this. However today when Mulcair asked that very question, Steve's new QP spokesey Callandra answered it with praise for the Roughriders and the false but parliamentary-privilege-protected allegation that three quarters of the Liberal caucus have faced fraud charges.

They're not even pretending to answer anymore and Speaker Scheer is doing nothing to stop it. It's an appalling circus with today being the worst I've ever seen.

Here's Andrew Coyne's take today :
"You do understand that we are not really a democracy, right? That parliament is a sham? That MPs are just props? If not, turn on QP."