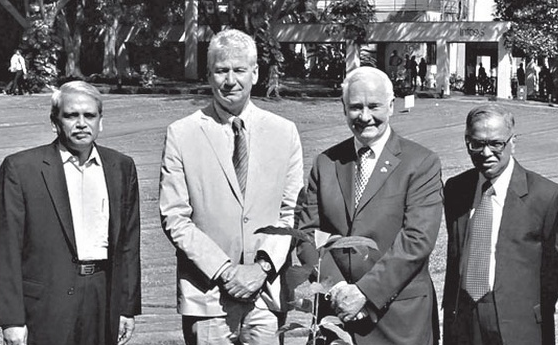 Yesterday on his state visit to India, Governor General David Johnston, along with High Commissioner of Canada to India Stewart Beck, visited software and outsourcing giant Infosys. He planted a tree and participated in a panel discussion on simplifying rules of cross border trade.

Last fall, Infosys was investigated for circumventing immigration laws in an alleged visa scam that brought thousands of workers into the US to be paid at Indian wages - giving them an advantage in underbidding local competitors - and "building a system to teach applicants how to deceive immigration authorities".


"Infosys was also accused of making errors on thousands of I-9 forms that are required to determine a person's work eligibility. Agents from Homeland Security Investigations who reviewed about 9,000 I-9 forms as part of the federal probe found more than 80 per cent of them had errors."

Infosys avoided a criminal court case by paying a $34-million settlement fee instead.
Infosys : "Those claims are untrue and are assertions that remain unproven."

The meeting of the Governor General of Canada with IT behemoth Infosys is likely to raise hope for the sector and its North American aspirations amid visa uncertainty.

"so they will be moving people back and forth and we see Canada, because we have a North American Free Trade Agreement, as an excellent location for Indian as well as other companies to locate and to capitalise on the North American market."

Canada’s location is near ideal for Indian IT companies due to the close proximity of the US, which is their biggest software export market. With the US all set to tighten their visa norms with the Comprehensive Immigration Reform Bill, close locations for client servicing and other operations will be an option Indian IT companies will consider carefully.

On the cap on visas, Beck said that there are policies that the companies were expected to meet. “There are some sensitivities in the country that have to be recognised,” he said

Speaking of low paid workers, there's that little matter of the Indian 'diplomat' [under international law, consular staff are not accorded the same immunity as embassy staff] who was charged with visa fraud and was discovered to be exploiting her own employee:
'Ms Khobragade, 39, India’s deputy consul-general in New York, had originally been arrested on December 12 and charged with one count of visa fraud and one of making false statements about how much she paid a domestic worker.

Prosecutors said that Ms Khobragade had said on a form that she was going to pay her maid, Sangeeta Richards, $4,500 a month but only gave her a fraction of that and a sum that was below the US minimum wage. The indictment placed before the court claims Ms Richards often worked more than 100 hours a week and only received half-a-day off.'
The Independent

On concerns around temporary foreign workers:
“There are some sensitivities in the country that have to be recognised,” he said

And that, ladies and gents, is why he's High Commissioner of Canada to India and you're not.

Canadian GG honors world's second largest outsourcing company, reported not even one single media source in the whole of Canada.