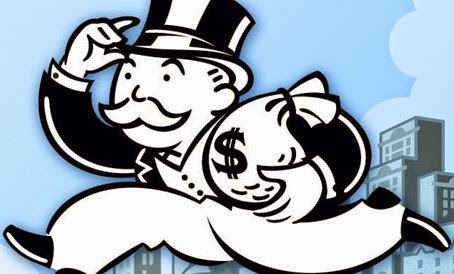 Between September 2008 and August 2010, Scotiabank received a $25 billion bailout amounting to 100% of the bank's value - or as Steve and Jim preferred to call it at the time : "liquidity support" ***.

Last year Scotiabank made a record $6.7 billion in net profit and CEO and president Brian Porter netted a total compensation package of $6,902,242 for the same year.

Nonetheless, Scotiabank announced yesterday it will cut 1,500 jobs, including about 1,000 in Canada.

Aren't you glad you moved your bank account to a local credit union as soon as you heard about their use of temporary foreign workers over Canadians?

Meanwhile, Bank of Canada Governor Stephen Poloz - estimated salary for 2013 of $436,100 – $513,000 - suggested that unemployed Canadian youth should work for free to pad out their CVs if they can't find paying jobs .

Kids in the Basement Should Take Unpaid Work, Says Poloz


"The Bank of Canada estimates about 200,000 young people want to work or work more, and Poloz said they may be scarred by prolonged unemployment that prevents them from moving out on their own. “I bet almost everyone in this room knows at least one family with adult children living in the basement,” Poloz said."

Poloz did not mention that "scarred" Canadian youth suffering twice the unemployment rate of the general population are having to compete for jobs with a global market of temporary foreign workers encouraged by the same cabinet that approved his Bank of Canada appointment.

Nor did he mention that an average student debt of $25,000 also likely precludes moving out of the basement, should your parent(s) be fortunate enough to have one from which to subsidize business with your free employment.
Marginalised communities, people with low-income backgrounds, and single parents are less likely to be in a position to assist their youth to upgrade their education to a marketable skill so that they will be in a position to compete with the 285,000 "higher calibre immigrants" Citizenship and Immigration Minister Chris Alexander intends to import next year.

Yeah, you pretty much have start off rich, Poloz did not exactly say.


*** During the 2008 to 2010 crisis of confidence in global credit markets, "liquidity support" granted to Canadian banks was a pre-emptive bailout relieving them of the necessity of having to sell off assets to pay down their debts.
.
Posted by Alison at 4:39 am
Email ThisBlogThis!Share to TwitterShare to FacebookShare to Pinterest
Labels: banksters, Chris Alexander, Scotiabank, Stephen Harper the Economist, temporary foreign workers

.. sorry.. but exactly who was in the room with Poloz when he pronounced that factoid? Folks with a basement, children.. and uh, connections..

This was drivel down 'echonomics' .. Hey, go volunteer with Exra Levant, Jian Ghomeshi, Dean Del Mastro, Fraser Institute & get some fringe poli-sci cred (or stain) on your weakass resume.. Spend a semester heckling a Democrat senator in Idaho or Wisconsin and the Tea Party of Canada will look after your brilliant career.. everafter.. till the Rapture

Hell, How long did Ray Novak huddle in Stephen Harper's garage before he became a splendiferous success.. ya gots to suffer sum pain to gain

"High calibre immigrants" aka migrants who may have benefitted from other states' investments in domestic education and training (or with independent wealth), thus making Canada a free-rider on the global labour market.

What happens if all these young adult workers take unpaid work (nevermind still manage to eat)? The bourgeosie gets a route to almost cost free labour and it all becomes normal. The bubble of youth unemployment grows larger with each generation of new workers, and pretty soon you both new and middle-aged workers over-represented in these ranks and there is no future.

I think all of us who have a bit of time should find a part-time unpaid internship and set all companies who use unpaid internships into chaos. A year or so ago one of the fancy hotels in Vancouver (was it the Hotel Vancouver?) advertised a table bussing internship. I had a lot of fun fantasizing about that internship. I could take away Poloz's dinner before he finished it, and tell him since I wasn't actually paid, I have to find food where I can.

Good friends in England tell us that over there, the wealthy and therefore well-connected have their kids work for free in the banking system. Of course, they still live at home and experience all the benefits of parents with cash. They continue working for free until they learn enough of the bank's systems to qualify to apply for a job and bingo! they're off and running in a lucrative industry with good pay and promotion opportunities. It's called "keeping it all in the 1%"

I can see this is becoming the way of the future in Canada as well.

Anon@5:09am : I believe Scotiabank walked that back after the bad publicity from CBC's Go Public.

Salamander : "who was in the room with Poloz when he pronounced that factoid?"

After an initial presser with reporters, Poloz repeated his remarks to the House of Commons Standing Committee on Finance yesterday.
He wasn't having a let-them-eat-cake moment imo, but when asked had no other advice as to what unemployed youth can do in the face of no jobs.

Other remarks from Poloz in that committee :
How robust are exports in non-energy subsectors?
"A quarter of them - some 500 export categories - have fallen by more than 75% since the year 2000 - a $30 billion loss due to factory closures and restructuring. Capacity in these subsectors has disappeared causing permanent unemployment and loss of 700,000 manufacturing jobs."

Predicted growth in GDP is 2% to 2 1/2%.
Weak job creation rate in Canada - "less than 1% - well below what one would expect from a recovering economy".

Our growth will be in emerging markets abroad.
Dead money - Poloz prefers the term "ready money" - is not going to new investment.
Presumed price of oil in BoC forecasting projection is $85.

Boris : Yes, and potentially resulting in a bad restructuring of how the whole economy works, although Poloz expects this youth unemployment bubble effect to even out as the economy slowly improves.
Really important points you make - I wish you would write to this in a way the rest of us can understand.

LulyMay : Yes, and I think twas ever thus actually, including here in Canada. But the massive increase in wealth/income disparity caused by a decline in both corp taxes and income tax for the 1% is resulting in a permanent and entirely unaccountable overclass - hence the obscenely large but now completely normal comp packages we're seeing given to execs who are laying off workers.

Alison, you should look into the asset-backed commercial paper bailout in 2008. It would be interesting to see what you come up with as there was definitely some funny business going on there. Liquidity support was more like writing down the over-exposure on the ABC's. Gov shouldn't have guaranteed investments of up to 100k for example.

Anon@2:23 : Would not know where to begin frankly.

Next Wednesday Joe Oliver will be delivering a "fiscal update" at the Sheraton in TO. It will cost $80 to attend and will be sponsored by a bank and a law firm. Why is that?