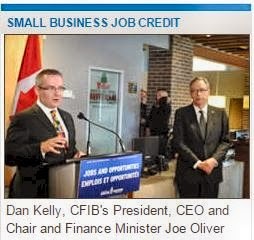 FinMin Joe Oliver admitted last week that his department had outsourced government policy to the lobby group Canadian Federation of Independent Business, and further, had not done their own analysis of CFIB's work even though the lobby group represents the businesses the new policy was intended to benefit. The new CFIB/FinMin policy takes $500M from the EI fund and gives it to small businesses - ostensibly to create jobs.

CFIB wasted no time taking credit for this piece of government policy.

On their webpage CFIB shows this photo of CFIB President Dan Kelly at the government's "Jobs and Opportunities" dedecked lectern, with FinMin Joe standing demurely off to the side.
A sidebar on the main page headlined "We Make a Difference - Victories" boasts :
"Big breakthrough on payroll taxes: CFIB joined federal Finance Minister Joe Oliver to announce the creation of the Small Business Job Credit".

CFIB certainly has the right to flaunt their influence over Con policy.

Two and a half years ago, they announced their success in lobbying the government "to make the Temporary Foreign Worker Program more responsive to the needs of employers", including a 10-day response time to LMOs, "a simplified online application process", and "a new more flexible wage structure".
And lo, Human Resources Minister Diane FInley made it so.

In fact, over the past four years from Nov 2010 to Nov 2014, Con MPs have quoted the CFIB more than 280 times in the House and in committee on everything from the Wheat Board to Canada Post to the temporary foreign workers program to federal budgets.

Here's a few from one week this past October :

With CEO Dan Kelly sitting on the Advisory Committee to the Deputy Minister of Citizenship and Immigration, the CFIB currently have 46 lobbyists listed to lobby 39 separate government institutions on 28 matters of policy for the year 2014, including "fair access to the Temporary Foreign Worker Program" and "support for Bill C525 (An Act to amend the Canada Labour Code) that secret ballot voting should be mandatory prior to union certification." 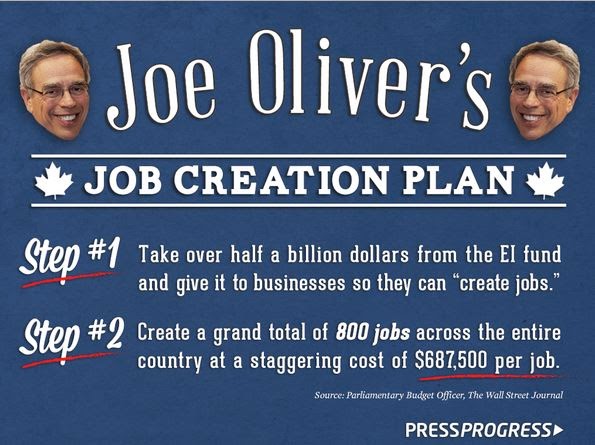 At left, also from Press Progress, is the short version of the apparently joint $550M CFIB/FinMin EI policy.
Estimated to create 25,000 person-years of employment over the next several years, this figure was later corrected by the parliamentary budget officer to 800 jobs at a cost of $687,500 per job.

No fault to the CFIB here - they're just doing their job for their guys, 109,000 small and medium Canadian businesses and franchises.

Perhaps notable though is that according to their Contact page, the CFIB Exec Vice President was formerly Director of Environment and Regulatory Studies at the Koch-funded Fraser Institute while the VP of Communications interned there.
.
Posted by Alison at 4:17 pm
Email ThisBlogThis!Share to TwitterShare to FacebookShare to Pinterest
Labels: CFIB, Dan Kelly, Diane Finley, Fraser Institute, Joe Oliver, outsourcing government, Stephen Harper the Economist, temporary foreign workers

The CFIB does not have franchises as members, only independent Canadian businesses.

Talk about government not doing its job?

Jeez I wish I could 'outsource' what I do and get paid allot and the seeople of Canada pay for it through taxes etc...

But I am not that self depreciating I worked all my life and now I see through Harper's theft of Canada I paid for the thug.

Am I ever stupid or what? I did not vote for him though so it gives me some sense of rationality!!!

Off topic but I have do this post cross posted at The Tyee:

Also Val The Harper Government was one of three Nations at the United Nations who refused to ban the Nazi Swastika...

Scary stuff my parents put their life on the line fighting the Nazi Germany and I do not want to see that swastika hung in parliament or my local government.

My mother used to spit when she heard a German accent. She was in the Dutch underground with many other ladies who were declared heroins when Canadians liberated them from the Nazi foothold on them. That is why our parents moved the family here to Canada. A peace keeping nation and as far away as possible from that horrendous encounter.

My dad served in submarines, I went in to one when I was in Long Beach California it was a tourist thing right next to the Queen Mary tourist thing. I can just imagine his pain in a very small diesel electric looking for 'the bad guys' who happened to be their next door neighbors things have not changed much.

I think we are in for nasty weather when will the jack booted militarized RCMP show up at my door only because I do not like the Harper government and put up a Swastika?

That is exactly what the Nazi's did and unfortunately we are not immune and the Harper government voting for Nazi stuff? This proves the Northern Foundation stuff is absolutely correct...

Allison on her blog here that I love tried to explain me wrong by shrugging it off she dropped this but believe me this stuff is hard to mine...

She though is a kind and balanced journalist...

And I dearly love her blog:

What else can I say?

You and The Tyee tell me more and I really appreciate it I am to date not an English teacher/professor or journalist I do want to write one day sigh that should be today because there is no tomorrow because when you wake up in the morn it is always today...

Helpfully, the CFIB provides little decals for its members to display in their shop windows. So it's easy to know which ones to boycott!

With the incredible Mr Limpet's anchor firmly set, the reel master gets their buoy.