TransCanada has dumped its US pr firm Edelman 10 days after the Greenpeace leak of documents outlining their joint dodgy strategy to use third party front groups to aggressively attack opponents of the Energy East pipeline, and to do and say what “TransCanada can’t" :


"TransCanada immediately denied it had implemented those tactics, which were widely criticized."

The leaked docs - some adorned with the TransCanada logo - date back to May and include various tactics for targeting opponents like Council of Canadians using forty Edelman employees and nine TransCanada staffers.

TransCanada referred to the "controversy" as "a distraction" and said they would like a do over now please : "We are therefore starting a fresh conversation."

"In the current environment, we can't have the respectful conversation that we want to have with Canadians and Quebecers about Energy East," TransCanada spokesman Tim Duboyce said Wednesday in a release. h/t CBC


About Edelman's astroturfing, which they describe as "third party support" and "an echo chamber of aligned voices"...

Edelman's pointman for TransCanada "Grassroots Advocacy Vision" astroturf is Mike Krempasky from their DC office. As documented by Greenpeace, Mr.Krempasky - Tea Party promoter and co-founder of RedState.com - previously had a pretty good run using fake grassroots paid bloggers in their folksy Wal-Marting Across America campaign before one was outed as working for the US Treasury and another a staffer at Washington Post.

"Krempasky’s Energy East “Pressure” team includes Brian McNeill ... director of opposition research for Senator John McCain's 2008 presidential campaign. McNeill made national news when it was revealed that he was one of three Edelman employees who were authoring all of the blogs ..."

on yet another Wal-Mart fluffer campaign. Meanwhile ...

"Edelman was paid $51.9 million to run the American Petroleum Institute’s (API) public relations campaign, which has involved Edelman managing multiple websites and online advertising efforts asking officials to approve the Keystone XL pipeline, support tax deductions for the oil industry and expand access for drilling on public lands.
Central to this strategy is the pro-oil group “Energy Citizens”, which was unveiled as an API-sponsored astroturf group by Greenpeace USA. The Canadian Association of Petroleum Producers recently launched its own version of Energy Citizens in Canada."

So despite CEO Richard Edelman statement in August in response to separate allegations regarding their work with climate change deniers that :


"We do not work with astroturf groups"

So far the Canadian version seems to be mostly about harvesting emails of future possible tarsands flufferbots.
As encouragement, the Spotlight on Energy Citizens page profiles Energy Citizens Brittany Allison and Hardave Birk. 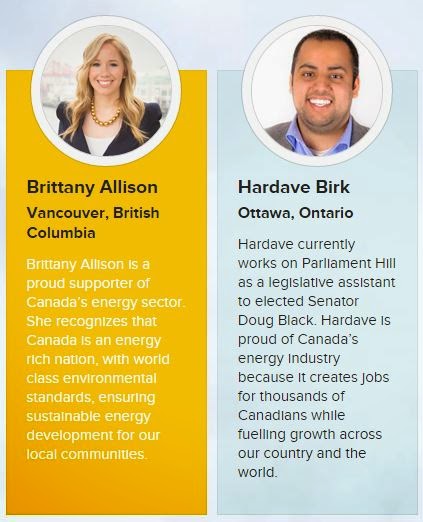 Brittany Allison was "a Policy Researcher in the Prime Minister’s Office in Ottawa" and a "Research Officer in the B.C. Legislature in Victoria", prior to her work as Public Affairs Advisor for Fraser Surrey Docks LP, "working to gain federal approval for a coal expansion project".


Currently Ms Allison is Manager of the astroturf tarsands site, British Columbians for Prosperity.
btw Is CBC Power and Politics regular Alise Mills still the "Media Relations Director" for BC4P?
Will she still write columns for 24 Hours, just bought out by PostMedia, with the bi-line :
"Alise Mills is a political commentator who speaks for British Columbians for Prosperity. Visit moneytrail.ca."

The only other Citizen Spotlight candidate so far is former president of University of Calgary Students Union, Hardave Birk, whose's bio notes he is legislative assistant to Senator Doug Black.

While in no way a reflection upon Mr. Birk, this seems as good a time as any to remind ourselves that prior to becoming Senator Black, Doug Black was president of industry lobby group Energy Policy Institute of Canada, or EPIC, where he worked with vice-chairs Bruce Carson, Gerry Protti and Daniel Gagnier on a national energy program representing their 38 energy member organizations, including TransCanada and CAPP.

Two years ago EPIC put out a presser taking credit for how they have shaped current Con policy on property rights, pipelines, public participation, and First Nations :

"You are the secret sauce," Doug Black once wrote to Bruce Carson, whose trial on illegal lobbying and influence peddling will not begin till September next year.

More Insider Tarsands Astroturf.  We are awash in the stuff.

What else is new corporations lie cheat and steal to and from the public sector when will it end? I say it is time to outlaw corporations we don't need them anymore.

Wyatt Webster brought those signs to Burnaby Mountain yesterday and got them into the MSM:

He had the same signs back in May & June; some tweets from then linked here:

Holly Stick: Oh that was me who just posted some tweets

Hi Holly : Heh. Was just doing a post on that because I remembered those same signs from when I blogged them and their Power of Canada "champions" back in July on Sunset Beach! Looking to see which media - aside from SunNews of course - ran with it this time first.

I knew I'd seen them somewhere, maybe it was at Creekside

Ya Alison but there other plays at work as well we do need badly to reform laws regarding corporations. Thanks for the link!

That said the oil industry is already dying all the easy oil is already out of the ground:

Also the oil price fell to $69 per barrel:

This makes it not profitable to harvest the Alberta tar sands. After Harper helped destroy Libya they now need $184/barrel to break even I think the tar sands needs at least $100/barrel...

And if this CIA guy is not a snake oil salesman we are in for nasty weather:

But there is good news out there too:

Mogs : Yup. Cheaper oil is going to mean more people use more of it, therefore more carbon emissions and harder for green tech to be competitive with it. Not good.

Yup but it will shut down the Harper/Red Chinese/ Alberta tar sands, look on the bright side...