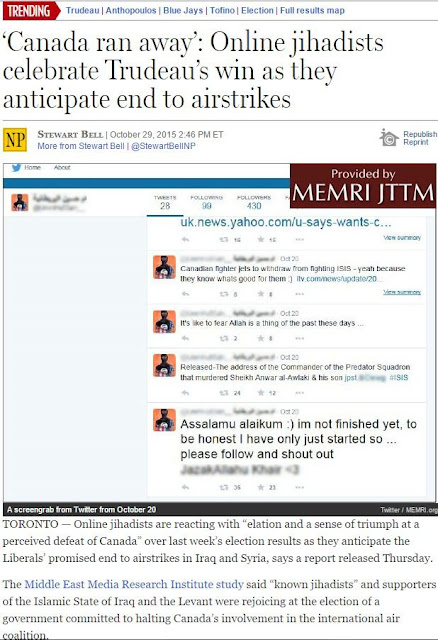 National Post, flagship of the largest media conglomerate in Canadian history run by a foreign hedge fund, inhales a MEMRI *report* based on the online musings of four anonymous 'known' jihadi dudes titled :

Then they give it the fabulous new Trudeau-torqued headline you see at left.

NaPo tweets it. While your standard NaPo tweet gets around 1 to 15 retweets if they're lucky, this one gets 159.

VICE News follows suit with its own rewrite of the MEMRI report :
"Canada Ran Away:' Jihadists Reportedly Rejoice Over Trudeau Victory"

as do others, and NaPo rewriter Bell retweets them too.

btw None of them bothered to blur out the identities of the 'known' jihadi tweeters as I have done here.

Is this a thing now?
It's fine now for the Minister of National Defence to promote tweets of 'known' jihadis if their messages can somehow be torqued to slag off on Trudeau?

Just as disturbing but predictable is the NaPo pipelining of MEMRI. Founded by a former colonel in Israeli military intelligence and the wife of a Dick Cheney advisor, MEMRI got a thorough thrashing from The Guardian over a decade ago in "Selective Memri" : "Investigates whether the 'independent' media institute that translates the Arabic newspapers is quite what it seems.".
Right Web and SourceWatch provide background and a handy list of MEMRI's PNAC and NeoCon advisors and directors. 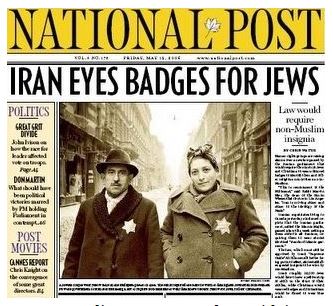 It was May 2006. NaPo torqued up another report they'd been pipelined from another outfit and later had to retract and apologize for it.
But not before it had been republished around the world and Steve got a chance to refer back to it publicly :
"We've seen a number of things from the Iranian regime that are along these lines .  It boggles the mind that any regime on the face of the Earth would want to do anything that could remind people of Nazi Germany."

So I'm just sitting NaPo's MEMRI presskit offering here while we wait to see if it gets the same overwrought reach-around treatment.
.
Posted by Alison at 5:35 am
Email ThisBlogThis!Share to TwitterShare to FacebookShare to Pinterest
Labels: Justin Trudeau, media bias, NaPo, rightwing media, terrorism industry

Jason Kenny confirms once again that he is pond scum.

Ezra's poll on leaving Syria didn't work out so well: